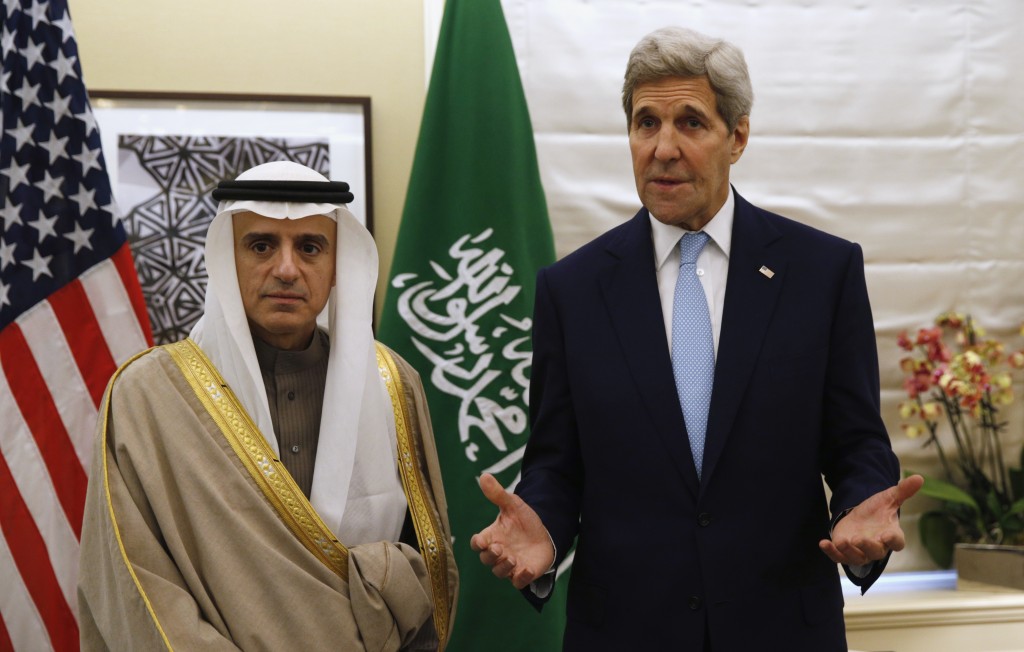 Secretary of State John Kerry on Thursday stood by ally Saudi Arabia in its widening rift with Iran over the execution of a Shi’ite cleric and urged the regional rivals to pursue a diplomatic solution.

The balancing act for Washington comes as the Obama administration readies billions of dollars’ worth of sanctions relief for Iran and seeks the Islamic Republic’s support in ending the Syrian civil war.

Kerry met with Saudi Foreign Minister Adel al-Jubeir amid overlapping U.S. diplomatic efforts in the Middle East and America’s own difficulties with the Sunni kingdom. The talks also coincided with Shi’ite Iran’s effort to completely satisfy the terms of last summer’s nuclear deal. Once Iran completes the task, probably in coming days, it should begin to reap massive economic benefits.

Saudi Arabia, which expressed reservations over the July accord, is wary of an enriched and emboldened Iran. The United States has offered the Saudis additional security assurances but remains perturbed by the mass executions carried out Jan. 2, which sparked the latest crisis with Iran. After an Iranian mob stormed the Saudi Embassy in Tehran, the Saudis severed diplomatic ties.

During their talks in a London hotel, Kerry said countries in the Mideast should not interfere in the affairs of others, referencing Saudi charges that Iran foments Shi’ite unrest throughout the Sunni monarchies of the Persian Gulf.

Kerry also emphasized the merits of diplomacy just days after his own frantic series of phone calls with Iranian Foreign Minister Mohammad Javad Zarif helped secure the release of 10 U.S. Navy sailors detained by Iran on a Gulf island.

Kerry told reporters that the U.S. understands “the challenges that the kingdom and other countries feel in the region about interference in their countries.” Kerry said Washington stands by its friends, “but we also want to see diplomacy work. We want to try to see if there’s a way, moving forward, to resolve some of these problems without moving to greater conflict.”

“The last thing the region needs is more conflict, and I know the kingdom of Saudi Arabia agrees with that,” Kerry said, describing that as a message he conveys in his regular phone conversations with Zarif.

“The most effective ways for us to work though these challenges is through our close partnership and alliance with the United States of America,” he said, comparing the current regional instability to Saddam Hussein’s invasion and occupation of Kuwait in 1990. He said the U.S. and Saudi Arabia would deal with the challenges “in a way that preserves the interests of our two great nations.”

The Obama administration does not want to play mediator between the Saudis and Iranians, a reluctance that has invited criticism from left and right. Republicans lawmakers in the U.S. Congress see the president as too concerned with protecting the nuclear agreement, his signature foreign policy achievement, and too willing to forsake the concerns of America’s bulwarks of support in the Mideast, including Israel.

Human rights groups have tried in vain to achieve a strong condemnation of a Saudi justice system that sentenced a leading Shi’ite cleric and others to death.

The Saudis are also in a bind. They are unhappy that the U.S. is increasingly looping Iran into efforts to stabilize Syria and combat the Islamic State. But its long-term security interests rest to a large degree on Washington.

Al-Jubeir reiterated his support for Kerry’s effort to broker a cease-fire between Syria’s Iran-backed government and Saudi-allied rebel groups. Talks are scheduled to begin Jan. 25 in Geneva.

“Our relationship with Iran is separate from the relationship we have with everyone else in terms of the Syrian cooperation group,” al-Jubeir said.

The diplomats also condemned Thursday’s terror attacks in the Indonesian capital of Jakarta.

“It should strengthen our resolve to work effectively together to combat the scourge of terrorism,” al-Jubeir said.

Kerry said governments wouldn’t be intimidated. “There is nothing in any act of terror that offers anything but death and destruction,” he said.