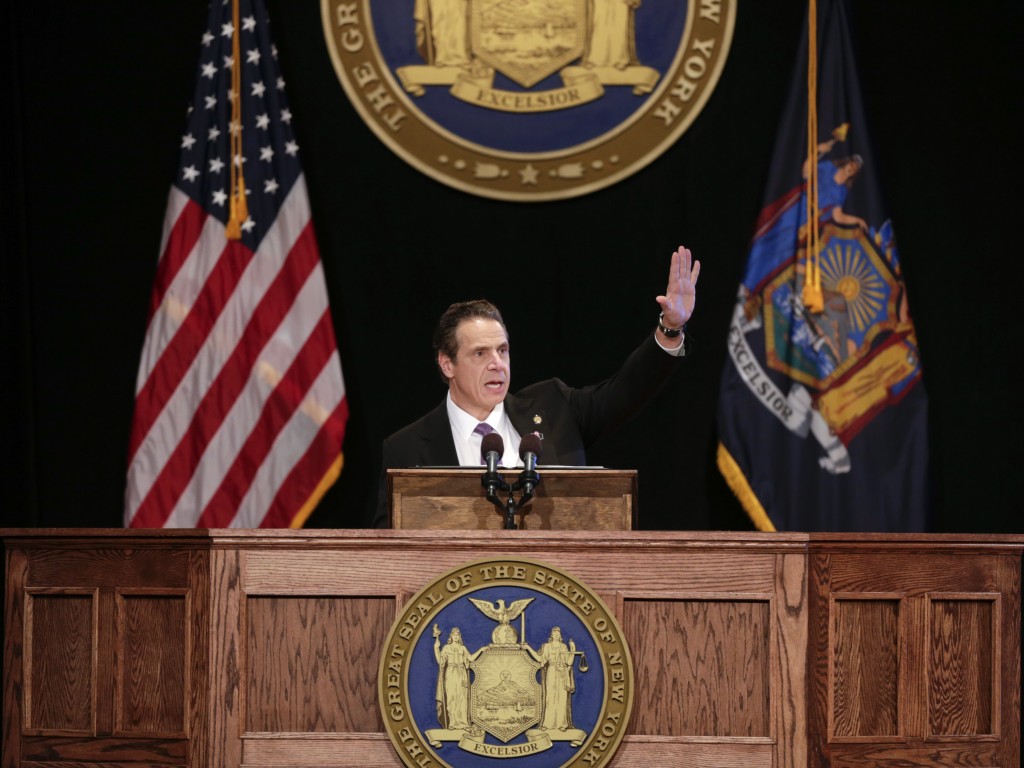 In his annual State of the State address, the Democratic governor also called for raising the minimum wage to $15, cutting small-business taxes and boosting the environmental protection fund.

Many of the proposals detailed Wednesday had already been rolled out by Cuomo in the past two weeks in a series of appearances around the state.

Cuomo again called for gradually raising the current $9 minimum wage to $15, an increase that would be phased in in New York City in 2019 and the rest of the state on July 1, 2021.

“We can show this nation what real economic justice means,” Cuomo told the audience. “We won’t stop until we get it done.”

Business groups and Republican lawmakers have voiced concerns that such a significant increase would force businesses to raise prices and cut positions.

Sen. Andrea Stewart-Cousins, who leads the chamber’s minority Democrats, said Cuomo had some good ideas, including the higher wage, ethics reforms, paid family leave and better protecting the most vulnerable New Yorkers. “Unfortunately, in the past, good ideas have been met with resistance and ultimately blocked in the Republican-controlled Senate,” she said.

Cuomo referenced the death of his father, former Gov. Mario Cuomo, in calling for a family leave law that would allow workers to take paid-time off to care for an ailing loved one or new child. It would be funded by employee contributions.

“I have kicked myself every day that I didn’t spend more time with my father,” Cuomo said. “There are many people in this state who don’t have the choice. Parent is dying. Child is sick. They can’t take off work.”

On the issue of homelessness, Cuomo is proposing $20 billion over five years for new affordable housing and additional shelter beds. He also called for an audit of homeless shelters; those found unsafe would be required to add police protection. Otherwise, Cuomo said, they would be closed or taken over by a receiver.

“We will not allow people to dwell in the gutter like garbage,” Cuomo said.

Tolls on the Thruway and the Tappan Zee Bridge would be frozen until 2020, and drivers who spend at least $50 annually on Thruway tolls could get a tax credit equal to 50 percent of the tolls paid.

Other proposals include pardons for young offenders who don’t commit new crimes and adding college courses in prisons. The governor also wants to end the state’s prohibition on professional mixed-martial arts bouts.

The budget would increase public school spending by $1 billion to $24.2 billion. The state Regents had called for $2.4 billion more in school aid. Advocates want even more.

To boost the economy, Cuomo recommends cutting the income tax rate for small businesses from 6.5 percent to as little as 4 percent effective next year. Cuts would apply to businesses with less than 100 employees and net income below $390,000.

Minutes after Cuomo began the annual speech before an audience of several hundred people, Assemblyman Charles Barron stood up and began yelling over the governor. Cuomo tried to quiet him, telling Barron, “Everybody heard you; everybody saw you.”

After a few tense moments, Barron left the convention hall. He told reporters that he believes Cuomo is ignoring the needs of poor New Yorkers and should propose at least $2 billion more for education, particularly for high-need schools.

Cuomo met with New York City Mayor Bill de Blasio ahead of the speech. The two men have had a contentious relationship, most recently centered on homelessness. Cuomo’s administration has faulted the mayor for not doing enough, but on Wednesday Cuomo thanked the mayor for assisting on the administration’s plan.

“The governor and I talked for about a half hour,” de Blasio told reporters outside Cuomo’s office. “It was a productive conversation.”

The court settlements Cuomo wants to divert to homelessness and other programs came from settlements with financial institutions investigated for violating trading sanctions and mishandling home mortgage-related securities, mortgages and foreclosures.

Following a wave of corruption scandals in the Legislature, Cuomo is calling for tight limits on lawmakers’ outside income. His plan, modeled after restrictions placed on members of Congress, would restrict a lawmaker’s outside income to 15 percent of the legislature salary, currently $79,500. The governor also wants to close the so-called LLC loophole, which allows limited liability corporations to skirt campaign finance limits.

A year ago, Cuomo proposed a $141.6 billion budget for the current fiscal year, which ends March 31.