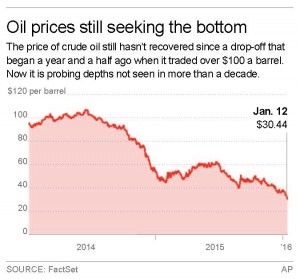 A volatile day on Wall Street ended in upbeat fashion Tuesday as a late-afternoon rally led by technology stocks pushed the market to a modest gain.

The turnaround helped snap an eight-day trading slump for the Nasdaq composite, which is heavily weighted with technology stocks.

Energy stocks slumped as much as 2 percent during the day, then recovered in late trading to see a slight gain.

Crude oil prices declined for the seventh day in a row, the longest losing streak since July 2014. Oil has now fallen nearly 18 percent this year.

“We saw a little bit of weakness in oil and the selling just continued,” said J.J. Kinahan, chief strategist at TD Ameritrade.

Investors have been wrestling with fears about a protracted slowdown in China’s economy and the potential fallout for corporate earnings. Uncertainty about Beijing’s ability to manage its financial markets has also kept traders on edge after sharp losses last week. The steep downturn in crude oil prices has also weighed on the market. The three major U.S. stock indexes are all down for the year, with the& Dow& and S&P 500 index off about 5 percent, while the Nasdaq is down 6.4 percent.

Trading looked to take a more positive turn early Tuesday as the major U.S. stock indexes opened higher and oil prices rose. That trend didn’t last, as oil prices turned lower once more, weighing on energy stocks. The market looked like it was headed for a lower close before it reversed course in the final hour of trading.

Energy stocks rose 0.4 percent. The sector is down 8.5 percent this year.

Traders continued to take their cue from oil prices by parting with stocks in energy and mining companies.

“The trading in oil is particularly precarious, and because of that, everybody is selling energy-related stocks,” Kinahan said. “Nobody wants to be the one holding the bag.”

Investors also had their eye on company earnings season, which runs for the next several weeks.