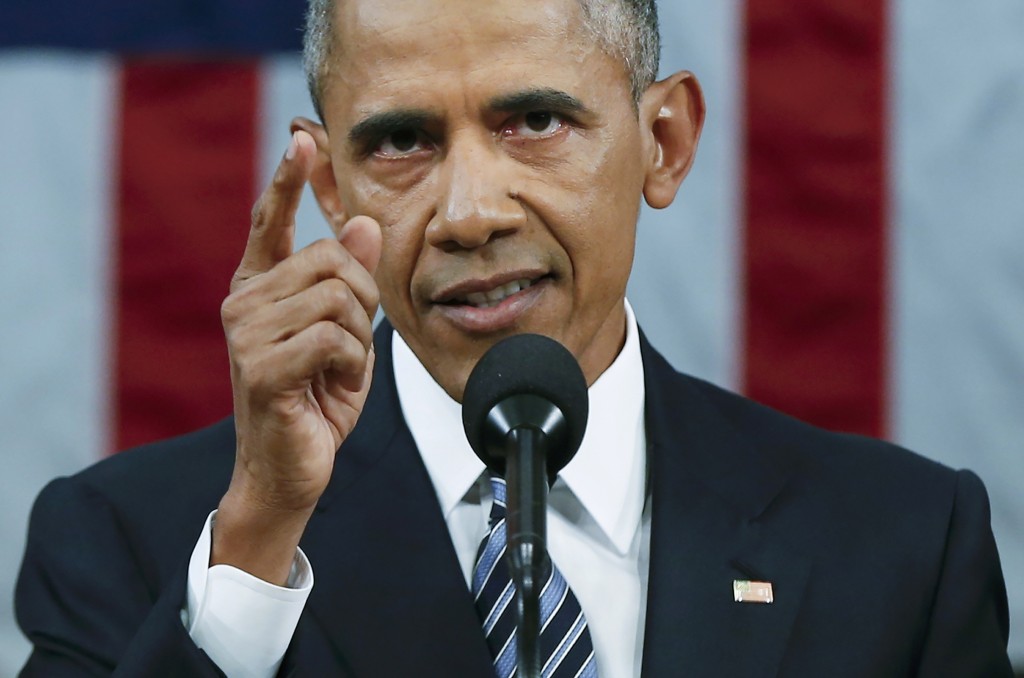 Eyeing the end of his presidency, Barack Obama urged Americans Tuesday night to rekindle their belief in the promise of change that first carried him to the White House, declaring that the country must not allow election-year fear and division to put economic and security progress at risk.

“All the talk of America’s economic decline is political hot air,” Obama said in his final State of the Union address. “So is all the rhetoric you hear about our enemies getting stronger and America getting weaker.”

“The United States of America is the most powerful nation on Earth. Period. It’s not even close,” he said.

The president’s address to lawmakers and a prime-time media audience was meant to both shape his legacy and put his imprint squarely on the race to succeed him. He defended his record — and implicitly urged the public to elect another Democratic president to build on it — but acknowledged the persistent anxieties of Americans who feel shut out of a changing economy or at risk from an evolving terror threat.

While Obama did not directly call out Republicans, he sharply, and at times sarcastically, struck back at rivals who have challenged his economic and national security stewardship.

In one of his most pointed swipes at the GOP candidates running to succeed him, Obama warned against “voices urging us to fall back into tribes, to scapegoat fellow citizens who don’t look like us or pray like us or vote like we do or share the same background.”

His words were unexpectedly echoed by South Carolina Gov. Nikki Haley, who was selected to give the Republican response to Obama’s address. Underscoring how the heated campaign rhetoric about immigrants and minorities from GOP front-runner Donald Trump in particular has unnerved some Republican leaders, Haley called on Americans to resist the temptation “to follow the siren call of the angriest voices.”

“No one who is willing to work hard, abide by our laws and love our traditions should ever feel unwelcome,” said Haley, whose parents are Indian immigrants.

Focused on his own legacy, Obama ticked off a retrospective of his domestic and foreign policy actions in office, including helping lead the economy back from the brink of depression, muscling through a sweeping health care law, taking aggressive action on climate change and ending a Cold War freeze with Cuba.

He touted implementation of the landmark nuclear deal with Iran, but made no mention of the 10 American sailors picked up by Iran Tuesday. The Pentagon said the sailors had drifted into Iranian waters after encountering mechanical problems and would be returned safely and promptly.

Tackling one of the most vexing foreign policy challenges of his presidency, Obama vowed a robust campaign to “take out” the Islamic State group, but chastised Republicans for “over the top claims” about the extremist group’s power.

“Masses of fighters on the back of pickup trucks and twisted souls plotting in apartments or garages pose an enormous danger and must be stopped,” he said. “But they do not threaten our national existence.”

The president’s words were unlikely to satisfy Republicans, as well as some Democrats, who say he underestimates the Islamic State’s power and is leaving the U.S. vulnerable to attacks at home.

Obama was frank about one of his biggest regrets: failing to ease the persistently deep divisions between Democrats and Republicans. The GOP-led Congress Obama stood before Tuesday night is hostile to his ideas and angry about his executive orders on issues from guns to immigration.

On the campaign trail, Trump’s heated rhetoric is seen by some voters as a welcome contrast to Obama’s cool calls for civility. On his Twitter account Tuesday night, the candidate dismissed Obama’s speech as “really boring.”

As for political disagreement, Obama conceded, “The rancor and suspicion between the parties has gotten worse instead of better. There’s no doubt a president with the gifts of Lincoln or Roosevelt might have better bridged the divide, and I guarantee I’ll keep trying to be better so long as I hold this office.”

He specifically called for ending the gerrymandering of some congressional districts that gives parties an iron grip on House seats. He also urged steps to make voting easier and reduce the influence of money in politics.

Mindful of the scant prospect for major legislative action in an election year, Obama avoided the traditional litany of policy proposals. He did reiterate his call for working with Republicans on criminal justice reform and finalizing an Asia-Pacific trade pact, and he also vowed to keep pushing for action on politically fraught issues such as curbing gun violence and fixing the nation’s fractured immigration laws.

Yet Obama was eager to look beyond his own presidency, casting the actions he’s taken as a springboard for future economic progress and national security. His optimism was meant to draw a contrast with what the White House sees as doom-and-gloom scenarios peddled by the GOP.

Republicans were largely dismissive of the president’s address. House Speaker Paul Ryan, assuming the speaker’s traditional seat behind the president for the first time, said Obama’s “lofty platitudes and nostalgic rhetoric may make for nice sound bites, but they don’t explain how to” solve problems.

Obama’s final State of the Union address revived some of the gauzy nostalgia that was a hallmark of his political operation. Among those sitting in first lady Michelle Obama’s guest box was Edith Childs, the South Carolina woman who first introduced Obama to the “Fired up! Ready to go!” chant that was a staple of his 2008 campaign.

The president himself appeared to get momentarily caught up in the emotion of the moment. As he walked toward the exit after his hour-long speech, he turned back to the crowded House chamber and said, “Let me take one more look at this thing.”