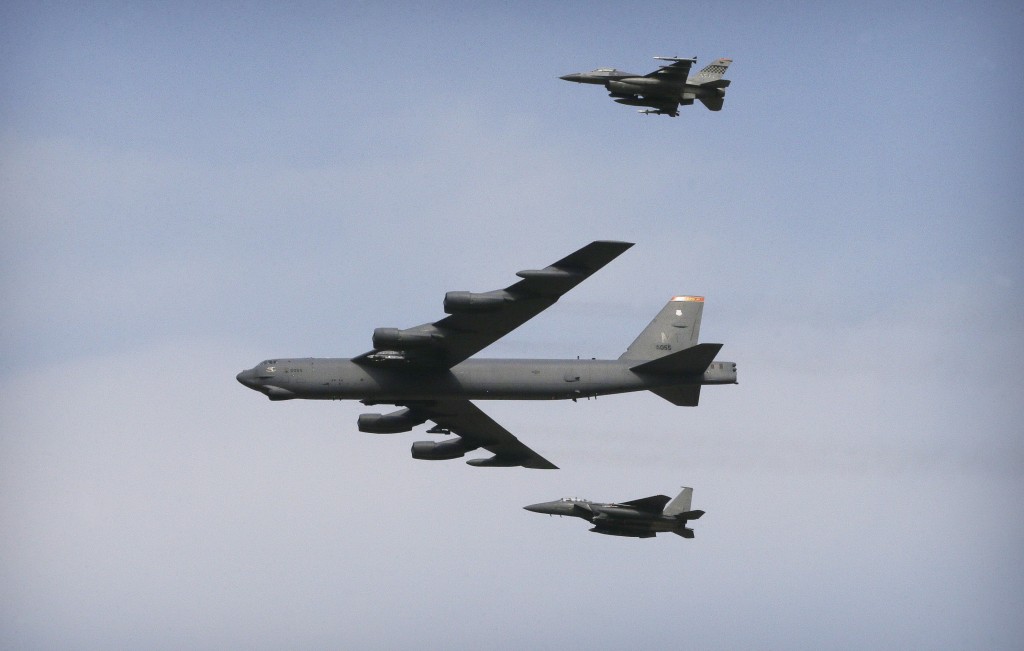 The United States and its ally South Korea were discussing on Monday sending more strategic U.S. weapons to the Korean peninsula, a day after a U.S. B-52 bomber flew over South Korea in response to North Korea’s nuclear test last week.

North Korea said it set off a hydrogen bomb last Wednesday, its fourth nuclear test since 2006, angering China, the North’s main ally, and the United States, which said it doubted the device was a hydrogen bomb.

In a show of force and support for allies in the region, the United States on Sunday sent a nuclear-capable B-52 bomber based in Guam on a flight over South Korea.

North Korea’s Rodong Sinmun newspaper, the mouthpiece of the ruling Workers Party, said the United States was bringing the situation to the brink of war.

“The United States and South Korea are continuously and closely having discussions on additional deployment of strategic assets,” the spokesman, Kim Min-seok, said.

China called for all sides to avoid raising tension.

“Safeguarding the peace and stability of Northeast Asia accords with all parties’ interests,” Chinese Foreign Ministry spokesman Hong Lei said in response to a question about the U.S. B-52 flight.

The commander of the 28,500 U.S. troops in South Korea, General Curtis Scaparrotti, urged them to be vigilant.

“I want you to maintain the highest level [of] readiness from a long-term view as joint military exercises are coming up,” Scaparrotti told U.S. and South Korean forces on a visit to a base, a U.S. military official said. He was apparently referring to joint annual military exercises that usually begin in February or March and invariably provoke an angry reaction from North Korea.

On the diplomatic front, South Korea said its chief nuclear negotiator planned to meet his U.S. and Japanese counterparts on Wednesday to discuss a response to North Korea, and the next day, he would meet China’s nuclear envoy in Beijing.

North Korea has been under U.N. Security Council sanctions since its first test of an atomic device. After its third test in 2013, the Security Council took about three weeks to agree on a resolution that tightened financial restrictions and cracked down on North Korea’s attempts to ship and receive banned cargo.

South Korea and Japan used a military hotline for the first time after of North Korea’s test, South Korea’s defense ministry said, in a sign that the North’s behavior is pushing the two old rivals closer together.

South Korea has also resumed anti-North propaganda broadcasts through loudspeakers along the border, a tactic that the North considers insulting. It responded with artillery fire the last time South Korea used the speakers in August.

South Korea also said it would restrict access to the jointly run Kaesong industrial complex just north of the heavily militarized inter-Korean border to the “minimum necessary level” from Tuesday.

The complex, where South Korean factories employ North Korean workers, is an important source of revenue for the impoverished North.