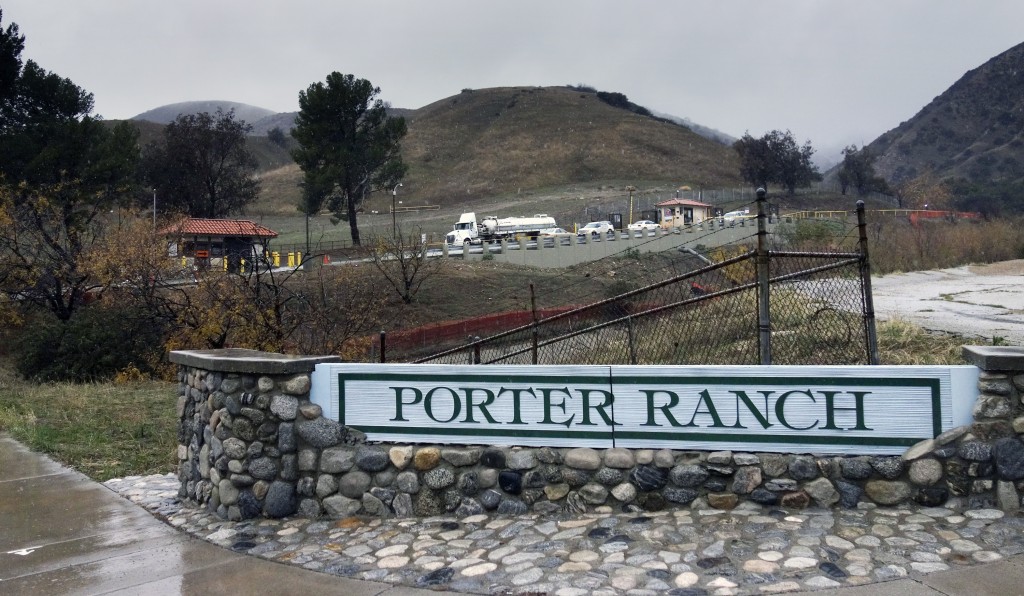 Hundreds of San Fernando Valley residents crowded into a high school gymnasium Saturday to express outrage over a gas leak that has sickened and displaced thousands from the Porter Ranch area.

“You need to shut it down. It’s killing us,” Maureen Capra said to South Coast Air Quality Management District officials about the damaged storage well in Aliso Canyon.

Capra, who has lived in Porter Ranch for four decades, said she and her family have suffered headaches, bloody noses and asthma because of the well. The gas “is in my house. It’s in my furniture. It’s in our bodies.”

The comments were made at a hearing overseen by the air quality district, which is reviewing a proposal released last week to control the leak that is emitting methane and sulfurlike odors.

Since the leak began Oct. 23, more than 1,600 odor complaints have been lodged with the district. Many residents have echoed Capra’s complaints of nosebleeds and headaches.

The proposal, developed by air quality regulators and the facility’s owner, Southern California Gas Co., involves deploying pollution control equipment to burn off the methane. The company also would fund a health study on the potential effects on the community, pay for stepped-up air monitoring and continuously monitor the leak with an infrared camera.

But activist groups and political leaders say the proposal does little to protect residents’ health and does not safeguard against future leaks.

“This has been beyond gross negligence by SoCal Gas,” said City Councilman Mitch Englander, who represents the northwest San Fernando Valley. “They were never proactive. There was not a contingency plan.”

County Supervisor Michael D. Antonovich dubbed the leak a “mini Chernobyl” and called for outside agencies to take control.

The space at Granada Hills Charter High School, where Saturday’s hearing was held, was at full capacity. The overflow crowd was directed to a separate area, where spectators followed the proceedings on video monitors.

Most residents who spoke publicly said they supported the proposal to capture and incinerate at least some of the leaking gas, but they urged the five-member panel of the AQMD hearing board to take more aggressive actions. Many attendees carried placards urging the board to “Shut. It. All. Down.”

“The local agencies haven’t done enough … and the delay is unnecessarily long,” said Porter Ranch resident Robert Park. He said he suffers from chronic lung disease after his military service in Iraq and worries about how the air contaminants might worsen his condition.

Kelly Hill, a resident of Porter Ranch, said she has noticed stains on her windows, a black oily mist around pools and a foul odor.

“What is it going to take for you to shut down this archaic, broken-down facility?” she asked. “When we drive home and look up at the hillside, we look at it with anger and disgust.” Hill also complained that she does not trust the gas company after calling its customer service line in the early days of the leak, when she was told the odor could be attributed to regular maintenance.

Javier Mendoza, a spokesman for the gas company, acknowledged that some residents received false information in the early days of the leak because of “internal miscommunication with our call center” before the company realized the leak would not be quickly fixed.

Another Porter Ranch resident urged the board to consider the leak’s long-term effects on the value of homes that, for many, represented their life savings.

The hearing lasted all day, in a court-like proceeding that included statements by the gas company, air quality experts, attorneys and 75 members of the public. All of the testimony was under oath.

An attorney for the gas company said the utility supported the air quality agency’s proposed order, but would not respond to individual claims about gas leak consequences because of lawsuits pending against the company.

“SoCal Gas stands ready to implement (the order’s) requirements just as soon as you issue it,” Robert Wyman told the board.

The well is one of the company’s four storage fields in Southern California, and, Wyman said, “it is unquestionably a strategic asset for the state’s and the nation’s energy supply.”

Clyde Thomas Williams, a member of the grass-roots environmental group Citizens Coalition for a Safe Community, pressed the board to include more robust testing of the pollution.

“What’s the composition of that gas?” Williams asked. “When you have odor complaints two miles away … there has to be something else going on.”

Edward Camarena, chairman of the hearing board, told the audience that the board would make its decision in public and hoped to finish the hearing next Saturday, issuing an order shortly thereafter.