In the first slate of nutritional recommendations it has issued since 2011, the federal government on Thursday gave health-conscious Americans the go-ahead to eat eggs and others foods rich in cholesterol, to drink as many as five cups of coffee daily, and to enjoy a range of fats long avoided by many.

The new dietary guidelines, issued by the U.S. Department of Agriculture and the Department of Health and Human Services, are the first ever to recommend a limit—10 percent of daily calories—to the amount of added sugars Americans should consume.

Saturated fats, too, should account for no more than 10 percent of a person’s daily calorie intake, the 2015-2020 Dietary Guidelines recommend. That puts red meats, butter, cheeses and high-fat dairy products like ice cream and whole milk in a category of foods to be eaten sparingly.

That advice fits with a new emphasis on moving Americans away from meals built around animal protein and toward diets more heavily derived from plants. Drawing a link for the first time between the planet’s health and that of Americans, the new federal guidelines said the widespread adoption of diets lower in animal protein and richer in fruits, vegetables, legumes and nuts would lower rates of disease as well as ease pressure on the environment.

Issued every five years since 1980, the U.S. Dietary Guidelines set nutritional standards for state and federal programs such as school lunches, food stamps and programs benefiting children and women who are expecting.

Increasingly, the recommendations are expected to translate current scientific findings on diet and nutrition into everyday guidance for Americans. That’s a tall order, both because many of the scientific findings remain controversial and because their complexity often defies efforts to simplify.

Essentially, the new guidelines nudge U.S. nutritional policy toward a traditional Mediterranean diet, which emphasizes consumption of copious fruits and vegetables, nuts and legumes drenched in such fat sources as olive, nut, soybean and sunflower oils.

A stark contrast to a “Western diet” heavy on red meat, high-fat dairy and simple carbohydrates, the Mediterranean diet calls for moderate fish and chicken consumption and reliance on whole grains and little added sugar. Research comparing populations that follow the two dietary patterns consistently find that adherents of the Mediterranean diet have longer lifespans and lower rates of cardiovascular disease, diabetes and some cancers.

“By focusing on small shifts in what we eat and drink, eating healthy becomes more manageable,” said Health and Human Services Department Secretary Sylvia M. Burwell in releasing the report early Thursday morning. “The Dietary Guidelines provide science-based recommendations on food and nutrition so people can make decisions that may help keep their weight under control, and prevent chronic conditions, like Type 2 diabetes, hypertension, and heart disease.”

By removing dietary cholesterol as a “nutrient of concern for overconsumption,” the authors of the new guidelines bowed to research findings suggesting that eating foods rich in the fatty substance contributes only marginally to levels of cholesterol circulating in the bloodstream. Medications such as statins, getting regular physical activity and controlling one’s weight are now considered to be more effective ways to improve worrisome blood-cholesterol levels.

A day ahead of the guidelines’ release, however, those claims drew controversy. The Physicians Committee for Responsible Medicine, a group that advocates for “a better future for people and animals,” on Wednesday filed a lawsuit against the U.S. Department of Agriculture and the Department of Health and Human Services.

The group charged that egg-industry interests powerfully influenced the research underpinning the new advice on cholesterol. As evidence, they noted that as many as four of the 14 outside experts who provided scientific advice to guideline drafters came from institutions that received substantial funds from the egg industry. That scientific advisory committee, the suit alleges, relied heavily on egg-industry-funded research findings when it recommended removing cholesterol as a “nutrient of concern” in February. 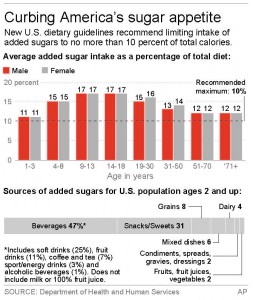 Other aspects of the new guidelines are likely to spark debate as well.

Despite a growing debate over the public impact of limiting salt intake, the newly released guidelines held the line on sodium as a “nutrient of concern.”

Pointing to research linking excess sodium intake to high blood pressure and other health problems, the new guidelines recommend that Americans ages 14 and older limit their sodium intake to less than 2,300 mg a day — the equivalent of a single teaspoon of table salt — and recommend lower levels for younger Americans.

On Thursday, the Centers for Disease Control and Prevention reported that even before salt added at the table is considered, more than 90 percent of children and 89 percent of adults ages 19 and older consume sodium well in excess of the limits advised by the new Dietary Guidelines for Americans.

Although some researchers and health organizations have advocated for even lower sodium limits, others have argued that lower limits could hurt some Americans, including those with heart failure.

Coffee, a beloved beverage that was long viewed with suspicion by physicians, got a surprising boost in the new guidelines. The committee of experts advising the guideline drafters cited mounting research showing that caffeine intake equivalent to three to five cups of coffee is not only safe, but also appears to reduce the risk of Type 2 diabetes and cardiovascular disease in adults. Caffeine may even protect against Parkinson’s disease, the evidence suggests.