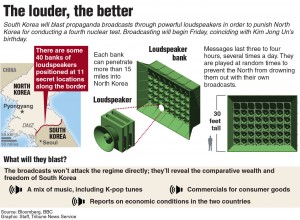 South Korea will resume the propaganda broadcasts that previously led the Kim Jong Un regime to threaten war, in order to punish North Korea for conducting a fourth nuclear test.

South Korea said it would respond “sternly” to any North Korean provocation, as it announced on Thursday a resumption of the broadcasts that led North Korea to mobilize troops in August before marathon talks managed to ratchet down tensions. They give North Koreans a rare glimpse of the contrasting economic and social realities between the two countries and are reviled by the Kim regime. Broadcasting will begin Friday, coinciding with Kim’s birthday.

“North Korea may react in an ultra-strong way to this decision by South Korea, viewing it as an act of ruining a national party,” said Cheong Seong Chang, a senior researcher at the Sejong Institute near Seoul, said by text message.

The decision on the broadcasts came after President Barack Obama and South Korean President Park Geun Hye held a phone call and pledged to “forge a united and strong international response” to North Korea’s “reckless behavior” for its test on Wednesday of what the regime claimed was a hydrogen bomb, though that claim has been met with much skepticism by the international community.. The U.S. is also considering sending additional military hardware, which could include B-52 bombers, F-22 fighter jets or a nuclear submarine, to South Korea, where 28,500 U.S. troops are already deployed.

For South Korea, the broadcasts are the most effective way to get Kim’s attention. Blasted from 30-foot tall banks of loudspeakers across the border, they can penetrate more than 15 miles into North Korea. The broadcasts don’t attack the regime directly, but reveal the comparative wealth and freedom of the South through a mix of popular music, commercials for consumer goods and reports on economic conditions in the two countries.

For the North, the broadcasts are seen as a threat to morale and a direct attack on the regime’s carefully constructed alternative reality that says the South is much worse off than the North while still bent on its destruction.

Tensions spiked between the countries in August when the government in Seoul resumed the broadcasts for the first time since 2004 to punish Pyongyang for what it suspected was a landmine attack in the demilitarized zone that injured two South Korean soldiers. The North responded by ratcheting up its combat readiness and threatening “all-out military action” to stop the transmissions.

The broadcasts have prompted a bigger reaction from the North than traditional means of pressuring the regime. The United States has deployed B-52s after previous provocations with little effect, and North Korea continues to spurn U.S.- and China-led efforts to restart stalled disarmament talks. The United Nations will likely roll out more sanctions, though earlier rounds of economic punishment have failed to deter Pyongyang’s ambition to expand its nuclear arsenal and develop a hydrogen bomb.

Short of military engagement, the West may be running out of options to rein in Kim. The United States expended its diplomatic capital on securing a nuclear deal with Iran and is also distracted by efforts to end the Syrian civil war. That puts pressure on China, which has led recent efforts to bring its ally back from the diplomatic wilderness.