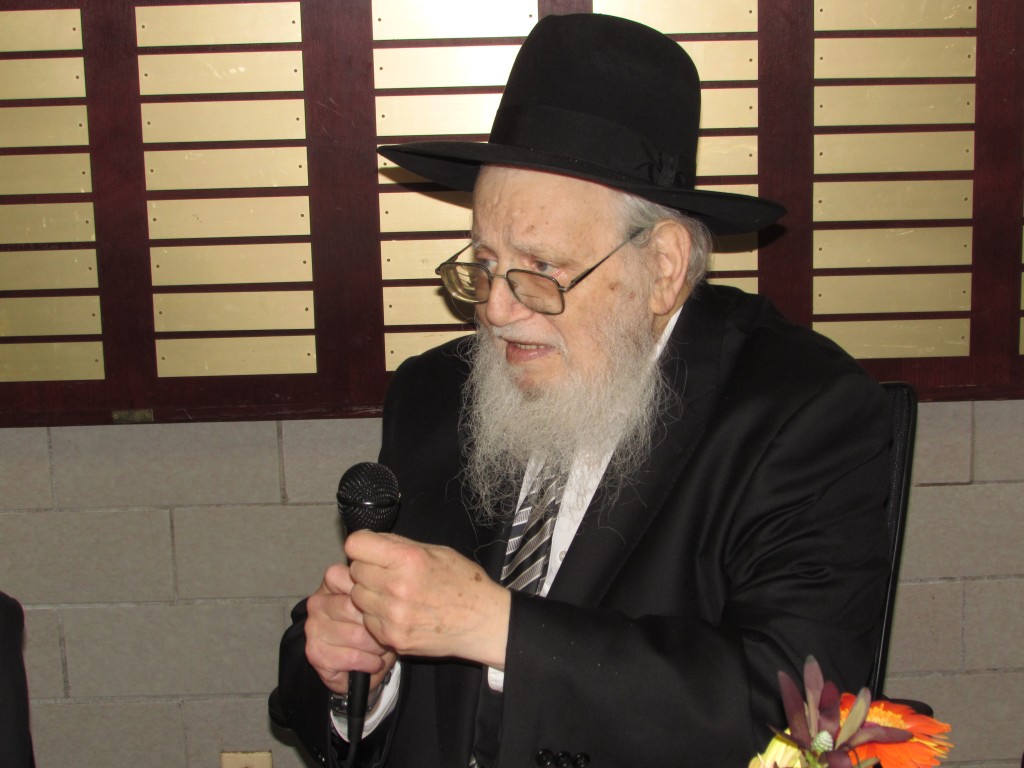 One of the first kollel yungeleit in America, and arguably its oldest member at the time of his passing, Rabbi Michoel Yosef Wolpin was a central element in the making of the American Torah scene.

Lucid, youthful and cheerful to his last minute, Reb Michoel was niftar suddenly on Wednesday night, leaving behind a family of four generations which is prominent, respected and devoted to klal and chinuch. He was 87.

As a youngster growing up in Seattle, Reb Michoel’s hasmadah and Torah knowledge convinced Harav Yaakov Kamenetzky, zt”l, that Torah could flourish on these shores as well. The future Rosh Yeshivah of Torah Vodaath had been contemplating moving back to Europe, but ended up sending tickets to his wife and children to come join him.

Reb Yaakov sent a letter to his brother-in-law in Russia, Harav Avraham Grodzinsky, the Mashgiach of Slobodka yeshivah, asking him to send his two sons then learning in Slobodka to the U.S.

The Mashgiach responded in a sharp letter, “why are you shmadding them?” he questioned. “They are learning very nicely here, why send them to America which has no Torah?”

“When I farhered Michoel Yosef,” Reb Yaakov replied, “I saw that you could learn Torah in America.”

This happened shortly before the Second World War broke out. As recorded by Yonason Rosenblum in “Reb Yaakov,” by ArtScroll/Mesorah Publications, Reb Yaakov had enormous hakaras hatov to Reb Michoel for providing him with the impetus to remain in the United States, saving his family from the Holocaust. He would attend most of his family simchos.

A member of the legendary Beis Medrash Elyon community established by Harav Shraga Feivel Mendlowitz, zt”l, in the 1940s, Reb Michoel became one of America’s first kollel yungeleit after his marriage in 1952, according to an estimate by his brother, yblch”t, Rabbi Nisson Wolpin.

And in retirement, he made history from the opposite end, becoming one of America’s oldest kollel yungeleit, learning full-time in Boro Park’s Kamenitzer kollel.

Born in Seattle, Washington, in 1928, Michoel Yosef’s parents, Reb Efraim Benzion and Kaila Wolpin, were immigrants from the Stoliner area of Russia. Michoel was a child genius in both Jewish and secular studies.

As a 6-year-old child, Michoel was farhered on the Neviim Rishinom, and finished maseches Bava Metzia at age 8. As a teenager, Michoel came in at second place at the statewide history competition, and at No. 12 in the entire country.

A 1937 report in the Jewish Transcript, a Seattle newspaper, says that “nine-year-old Melvin Wolpin, son of Teacher Ephraim Wolpin” became the “youngest student to receive a diploma from the Seattle Talmud Torah in its 40-year history.”

He studied in the local public school but learned for three hours every day with the Rav of Seattle, Harav Boruch Shapiro, a Dvinsk native who had been a talmid of the Rogochover and the Ohr Sameiach.

When his son turned 16, Reb Efraim determined to send him to New York to study in Yeshivah Torah Vodaath.

The reaction by the community, proud of their local son’s achievements in the secular world, was antagonistic, according to his son, Rabbi Yaakov Wolpin.

“A whole delegation came to my grandmother,” said Rabbi Wolpin, a longtime maggid shiur in Mesivta Karlin Stolin, “and said, ‘what are you doing, you are being mafkir your children.’ But he came anyway.”

Reb Michoel became one of the star talmidim of Torah Vodaath, later going to Monsey where Beis Medrash Elyon had been started four years previously.

In 1952, Reb Michoel married Fradel Selig, whose family had fled Nazi Germany when she was 11, and became one of America’s first kollel yungeleit.

Rabbi Nisson Wolpin, Reb Michoel’s younger brother, told Hamodia several years ago that at the time, there were “no more than 23 or 24 kollel yungeleit in the entire Western Hemisphere.”

“She was so proud of the fact that her husband was learning full time in kollel,” said Rabbi Wolpin, the former editor of The Jewish Observer. “It was her greatest pleasure. And she came from an Ashkenaz background,” in which a kollel lifestyle was not the norm.

Mrs. Wolpin’s sole desire was that her husband and eight sons learn uninterrupted. Even after Reb Michoel went out into the workforce, she would prepare supper for him at night and then shoo him out at 8 o’clock for his daily seder.

“She never asked us to help out,” said their son, Reb Yaakov. “It was always, ‘Go to shul and learn.’ When my father went out to work he would come home between six and seven [o’clock], but by eight he was out the door already to learn for three hours.”

It appears that their sacrifice paid off, Rabbi Nisson Wolpin said. All of their sons are either in chinuch or have steady learning sedarim every day.

“They are all marbitzei Torah; the ones that work are kovei’a itim for Torah,” Rabbi Wolpin said.

After several years in kollel, the Wolpins moved to Williamsburg, where Reb Michoel took a job in chinuch and later in a manufacturing company. They later moved to Boro Park where his wife took a job in Bais Yaakov.

In 1975, Reb Michoel’s rebbi, Reb Yaakov, was honored with beginning the next cycle of Shas at the daf yomi Siyum Hashas. Speaking afterward, Reb Yaakov, then 86-years-old, said, “Nu, if I started it, then it must be time for me to start learning [daf yomi] also.”

Reb Yaakov completed the Shas seven years later, triumphantly saying that this was the first time he finished it from beginning to end.

Along with Reb Yaakov, Reb Michoel made his own siyum, having been inspired by his rebbi’s example to start daf yomi on his own.

Meeting him at the Siyum Hashas of daf yomi in 2012, Reb Michoel told this writer that he had just finished Shas for his fifth time. His son noted that that was with the daf yomi program; he finished Shas several other times before.

Smiling, with a deep-throated chuckle never far away, Reb Michoel retained the freshness of a young man despite the loss of his own son and son-in-law and young ages.

When 20 years ago he made a siyum Mishnayos at his shver’s yahrtzeit, someone asked him if he completed Shishah Sidrei Mishnah every year.

“If people think that I am the type to do it,” he reasoned, “then I will do it.” He has made a siyum Mishnayos every year since.

Reb Michoel was mildly ill on Wednesday, but not a sickness which prevented him from going about his normal activities. It therefore came as a shock when he was niftar at approximately 9:00 p.m.

The levayah was held on Thursday morning at Shomrei Hachomos Chapels. Maspidim included two of his brothers, Harav Chaim Boruch Wolpin, Rosh Yeshivah of Yeshivah Karlin Stolin, and Harav Dovid Wolpin; all his sons; Harav Yitzchok Paler, Rosh Yeshivah of Yeshiva Mekor Chaim where he davened on Shabbos; Harav Boruch Ber Krupenia of Kamenetz; Rabbi Menashe Karmel, a neighbor; and Harav Meir Weinberg, his chavrusa of a half century.

Among his children and grandchildren are Roshei Yeshivah, mechanchim and ehrliche Yidden.