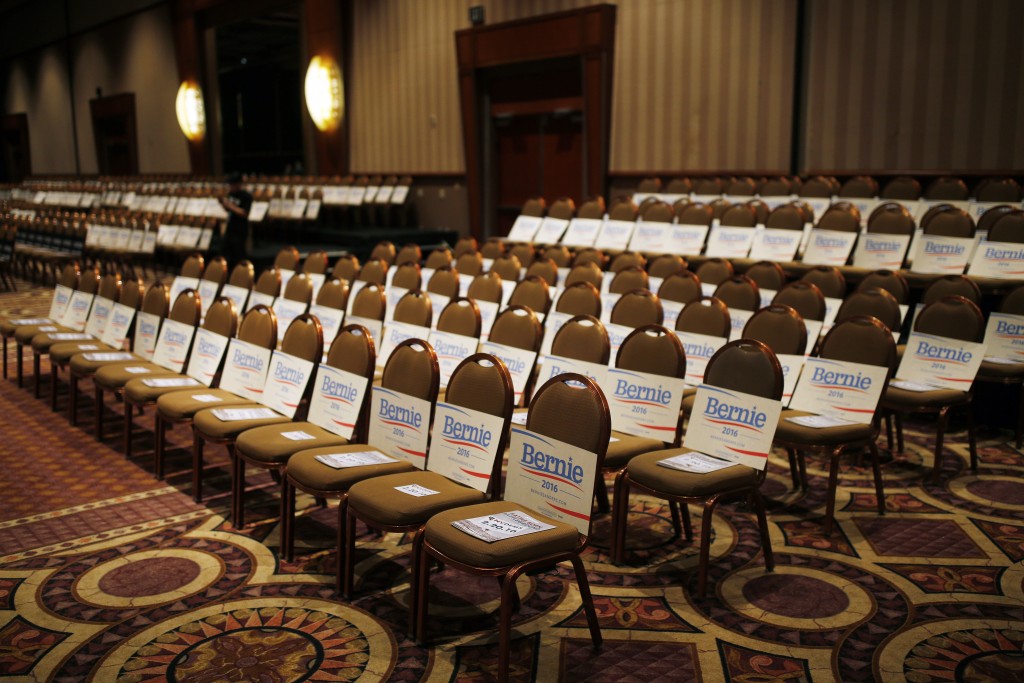 Hillary Clinton and Bernie Sanders are fighting for support among Nevada Democrats, looking beyond the leadoff contests of Iowa and New Hampshire to a state that could play a pivotal role in the nomination fight.

Clinton presented herself Wednesday night as the party’s best choice to defeat Republicans in the fall and preserve the legacy of President Barack Obama, promising Nevadans would “always have a friend in the White House if I am your president.”

“In January of 2017, a new president is going to walk into the Oval Office and America can’t afford it to be a Republican who will rip away all the progress we have made,” Clinton said, as many of Sanders’s supporters stood silently, holding up signs for the Vermont senator.

Sanders was greeted by a loud cacophony of horns and vuvuzelas in his cheering section, telling supporters that Republicans suffered from “an illness called amnesia. They seem to have forgotten the conditions they left this country in” when Obama took office in January 2009.

While the former secretary of state has led Nevada polls, Sanders has poured money and staff into the state in recent weeks in hopes of pulling off an upset. Nevada follows Iowa and New Hampshire on the Democratic calendar, and a split decision by the first two states could place a greater emphasis on the western state, which features a much more diverse electorate.

The third major Democratic candidate, former Maryland Governor Martin O’Malley, has trailed Clinton and Sanders by a wide margin but won cheers from the crowd with a series of slams against the Republican presidential field.

Addressing Donald Trump, O’Malley said, “I’d like to say that Donald Trump is the most outrageous and unqualified person to ever run for president. But really, that’s not fair to Ted Cruz.”

The state party’s caucus dinner at the MGM Grand brought together about 2,200 activists, one of the largest gatherings before the state’s presidential caucuses on Feb. 20.

Clinton, backed by women and Latinos in large numbers, won the popular vote in Nevada’s 2008 caucuses against Obama. But the future president narrowly prevailed in the delegate count with the help of a strong showing in rural areas.

In her speech Wednesday evening, Clinton reminded voters that she was raising millions of dollars for state parties in an attempt to strengthen Democrats up and down the ballot. Sanders said the only way Democrats would win the elections was through generating enthusiasm and a massive voter turnout.

Nevada’s increasingly greater profile in the presidential sweepstakes has been promoted by Senate Democratic leader Harry Reid, who has remained neutral in the 2016 race but has encouraged an active caucus campaign.

Reid has sought to give his home state even greater prominence, noting its growing Hispanic population and role as a competitive state in recent presidential elections. Obama won the state in both 2008 and 2012, but it was fiercely contested in both campaigns.

“No state reflects the growing diversity of our nation better than Nevada,” Reid said, before joining hands with the three Democratic candidates on stage.

Republicans sought to tie Clinton to Reid, calling him the “face of Washington dysfunction.” Michael Short, a spokesman for the Republican National Committee, said that “while Nevadans and the rest of the country want to turn the page on the Reid-Obama era, Hillary Clinton is promising an encore.”

Reid is not the only powerful figure expected to stay on the sidelines in the Democratic campaign. The Nevada culinary union, which backed Obama in 2008, is not expected to endorse a candidate before the caucuses, putting the support of about 60,000 workers up for grabs.

In a competition of enthusiasm, the room offered a deafening roar at times as Sanders’s cheering section screamed “Feel the Bern” and blew into yellow vuvuzelas and air horns, while Clinton’s backers chanted “HRC” and waved neon blue glow sticks.

The noise clearly got Sanders’s attention, and he interrupted his speech at one point to tell his backers, “That music is really beautiful!”