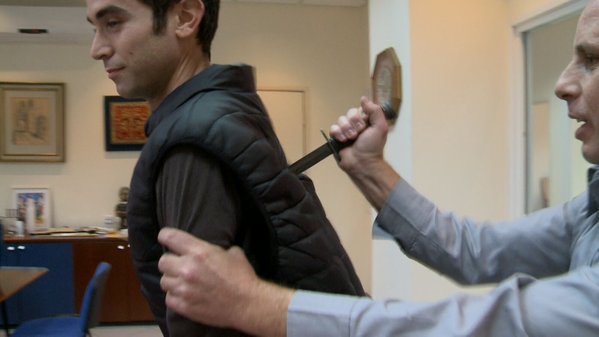 An Israeli reporter was accidentally stabbed on the job Wednesday while demonstrating a protective vest.

Reporter Eitam Lachover was filming a story about a company making protective vests at a time when Israel is facing near-daily stabbing attacks by Palestinians.

Linda Bar, a spokeswoman for Israel’s state broadcaster, said Lachover was asked to try on the vest and demonstrate a thwarted stabbing. But the knife penetrated the vest, lightly wounding him in the upper back.

Yaniv Montakyo, a vice president at the company that makes the vest, told Israeli Channel 2 that he stabbed Lachover in an area of the vest where there was no protective material. He said that an earlier take was successful and did not harm the reporter.

Bar said that despite the mishap, the news item would be broadcast Wednesday.

Lachover said on Twitter that he got stitches and was discharged from the hospital.