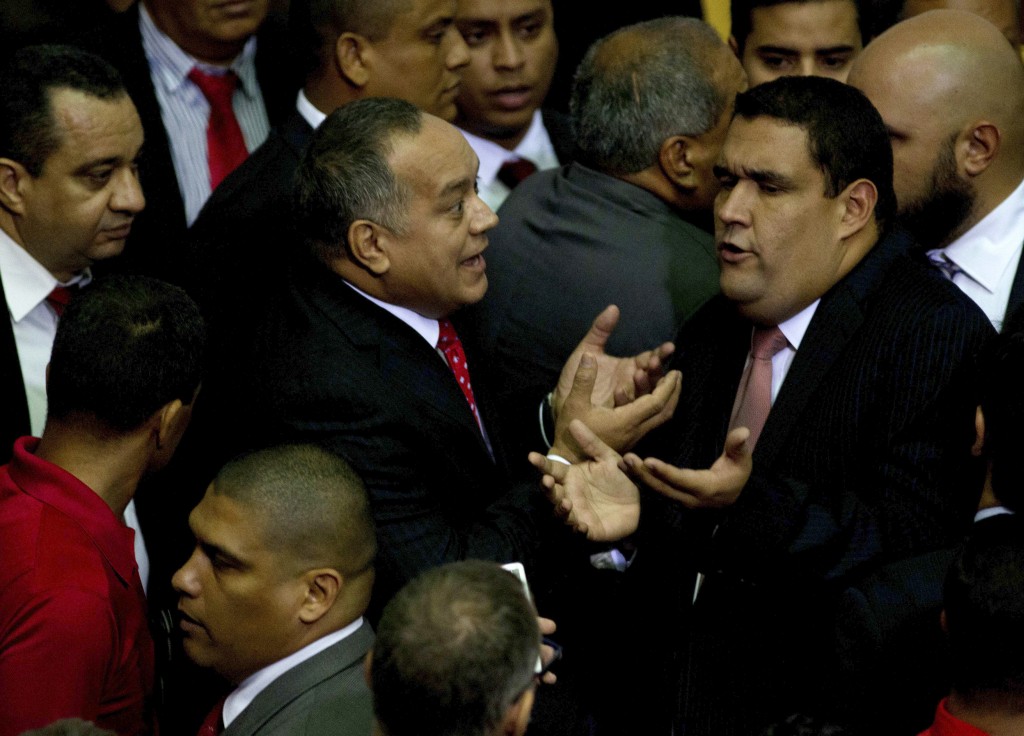 Venezuela’s opposition was sworn in Tuesday as the majority in the National Assembly, the first time in 17 years that opponents of the socialist revolution begun by the late Hugo Chavez have controlled the legislature.

Voting to approve the legislature’s new leadership followed debate over whether to take the oath of 163 or 167 lawmakers following a Supreme Court ruling barring four elected representatives from taking their seats over allegations of fraud, depriving the opposition of a two-thirds majority.

Earlier in the day, hundreds of opposition supporters accompanied the incoming lawmakers in a march past a heavy military barricade to the legislature downtown. A few blocks away, a far larger crowd of government supporters gathered outside the presidential palace to lament the inauguration of what they called the “bourgeois parliament.”

Reflecting the changing political winds, journalists for the first time in years were granted access to the legislature, and state media broadcast interviews with the opposition political leaders.

Conspicuously absent inside the dome-roofed legislative building were the oversized portraits of Chavez and independence hero Simon Bolivar that had been a fixture for years.

Instead, from the public gallery, the wife of jailed opposition leader Leopoldo Lopez held up a sign reading “Amnesty Now,” referring to what could be one of the legislature’s first orders of business: a law freeing dozens of activists jailed during anti-government unrest in 2014.

“Keep a strong hand!” 65-year-old Mary Mujica shouted as the incoming parliamentary president, Henry Ramos, wiggled his way through the heavy crowd. “There’s a criminal conspiracy running the country and you can’t negotiate with criminals.”

Incoming opposition lawmakers are promising to use their new muscle to make sweeping changes, while the socialist party of current President Nicolas Maduro has been equally adamant that the legislature will not be allowed to roll back Chavez’s revolution.

The Supreme Court last week barred three opposition lawmakers from taking their seats, responding to a challenge by supporters of the socialists who accuse the opposition of stealing the Dec. 6 legislative election. That ruling could effectively snatch away the opposition’s two-thirds majority.

On Monday, Ramos reiterated his promise to swear in all lawmakers. He said Maduro should consider resigning to save Venezuela from a political crisis, echoing a call that hardliners made in 2014 when they launched a street protest movement that resulted in dozens of deaths.

Ramos is a pre-Chavez era politician whose promotion to the top spot in Congress over a fresher face has exposed internal rifts that will dog the opposition. In 2005, Ramos was among promoters of an electoral boycott that handed almost unanimous control of the legislature to the government — a tactical move he and much of the opposition later came to regret.

The coalition’s more moderate wing has lambasted the hard-liners’ strategy of trying to force Maduro from office and wants to take pragmatic steps to wrench the oil-dependent economy out of a tailspin marked by triple-digit inflation and the world’s deepest recession.

The factions have agreed on a basic agenda that includes probing government corruption, pushing for the release of central bank data and giving Maduro a six-month deadline to rescue the economy.

There’s also unanimous support for freeing the jailed activists even in the face of rebuke by government supporters who consider it a sinister ploy.

Jennifer McCoy, a longtime observer of elections in Venezuela for the pro-democracy group founded by former U.S. President Jimmy Carter, said the coming weeks will tell whether the government and opposition can put aside their mutual hatred.

“This is the moment when both sides need to determine how to move forward: whether they are going to work together or engage in a battle royal,” said McCoy, who is now director of the Global Studies Institute at Georgia State University.

The socialists began fighting the new Congress almost as soon as it was voted in. Outgoing lawmakers appointed new Supreme Court judges and changed the ownership of the National Assembly’s TV station. Maduro on Monday issued decrees limiting Congress’ power over the central bank.

In Washington, the U.S. State Department said Monday that it was concerned by the Maduro government’s attempts to interfere with the new Congress, drawing a sharp rebuke from Venezuela’s president.

Maduro was conciliatory in a national address Monday, saying he had instructed the military to guarantee the opposition access to the National Assembly so it can be seated peacefully.

But pro-government militias, dubbed by Chavez as “the armed wing of the revolution,” called on their supporters to stage a counter protest, raising the threat of clashes.

“The revolution must be defended in the streets,” read one pro-government call circulated Monday. “A bourgeoisie Congress will never do anything but legislate the slavery of the people.”