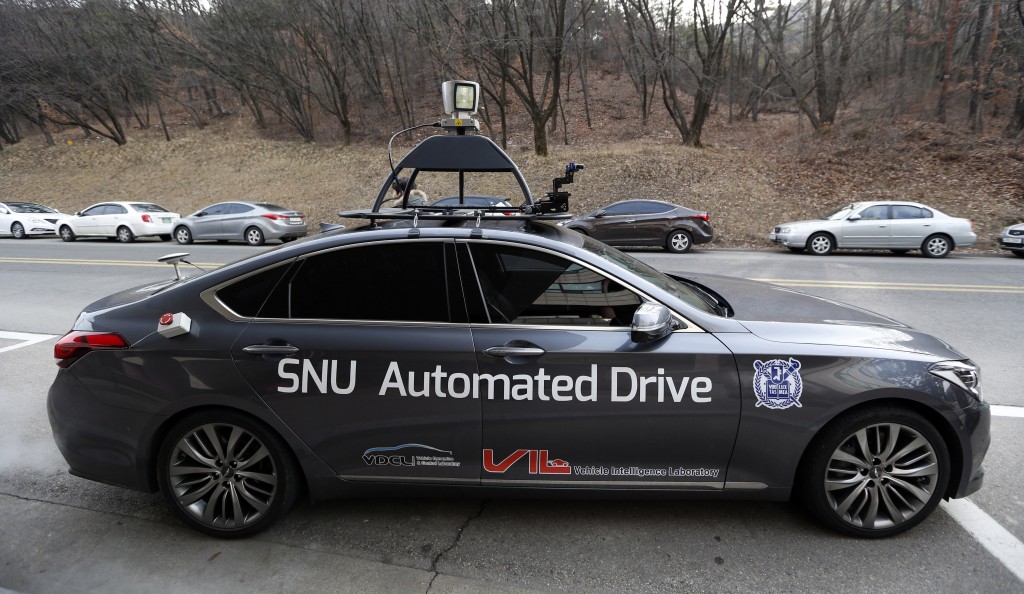 A South Korean university is testing a sedan that can pick up and transport passengers without a human driver, giving a glimpse into the future of autonomous public transport.

Seo Seung-Woo, director of the Intelligent Vehicle IT Research Center at Seoul National University, said the university has been testing the driverless taxi to transport disabled students around campus.

The vehicle, called Snuber, has been navigating the 4,109 square meter (44,200 square foot) campus for the past six months without any accidents. It works in conjunction with a hailing app created by the university.

Companies around the world are betting that automated driving technology will transform public transportation.

In Japan, a company called Robot Taxi Inc. plans to offer a full commercial service in 2020. In Greece, driverless buses called CityMobil2 have been tested in real traffic. General Motors Co. said Monday it is investing $500 million in ride-hailing company Lyft Inc. and forming a partnership that could eventually lead to on-demand, self-driving cars.

South Korean companies, however, have been slow to embrace the self-driving technology. The country’s largest carmaker, Hyundai Motor Co., said it expects to roll out a fully automated car in 2030. Only this month, Samsung Electronics created a team to focus on autonomous driving.

On the campus of Seoul National University, many heads turn as the grey sedan passes. It has a turret on its roof with devices that scan road conditions. Seo’s team outfitted the Genesis sedan with a camera, laser scanners and other sensors.

For now, due to regulations banning autonomous vehicles on the roads, a driver is behind the steering wheel and can override the automation in emergency situations.

The car cannot travel faster than 30 kilometers per hour (18.6 miles per hour) because of the speed limit on campus. There are no full traffic lights but researchers have programmed Snuber to navigate around other challenges.

The vehicle applies a brake pedal at a red stop sign and at a pedestrian crosswalk. When another vehicle stops in the middle of the road, the automated sedan will scan the other lanes to detect vehicles traveling from the opposite direction. If there are no other vehicles, the Snuber moves into the oncoming lane to pass the vehicle.

However, it is not yet ready for use outside the relatively controlled campus environment.

“It will take a huge amount of time and effort,” said Seo. “We need more tests in real traffic conditions.”

He said in early 2020, a driverless car will be running between tollgates on highways. A door-to-door pickup service using a self-driving car is likely in early 2030, he said.

Experts said such services have the potential to change delivery businesses, not only mass transport.