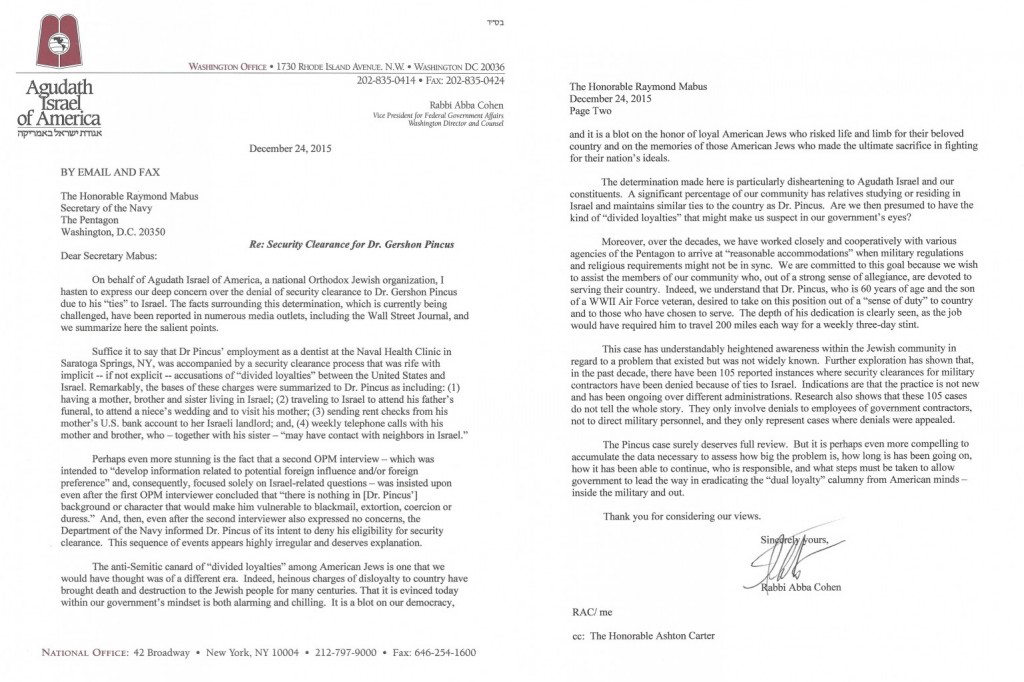 When Dr. Gershon Pincus, a dentist from Far Rockaway, decided to “give back” to his country by working in a naval clinic, he hardly imagined that he would become the center of a controversial legal battle. However, that is what occurred after the result of his background check determined that the dentist’s regular contact with his mother and siblings living in Israel “may be a security concern due to divided loyalties.”

That decision, which is presently awaiting appeal, has elicited strong condemnation from Jewish organizations expressing concern not only for Dr. Pincus’s personal situation, but for the broad ramifications for many in the community.

“A significant percentage of our community has relatives studying or residing in Israel and has similar ties to the country as Dr. Pincus,” said Rabbi Abba Cohen, Agudath Israel’s vice president for federal affairs and Washington director. “Are we then presumed to have the kind of ‘divided loyalties’ that make us suspect in our government’s eyes?”

Martin Nachimson, president of the Orthodox Union, said that the facts of the case as presented “suggests an anti-Semitic bias that is poorly disguised as security concerns.”

The Department of Defense has flatly denied such accusations and maintains that there are no special standards for screening applicants with connections to Israel — no more than for any other country.

The dentist, who has been in practice for over 30 years, began working at a naval clinic in Saratoga Springs in the summer of 2014. Despite the considerable distance from his home, he was determined to use the opportunity to serve his country. That October he underwent a routine security interview given to all civilian employees working for the Department of Defense.

Avi Schick, a partner at Dentons’ law firm who is representing Dr. Pincus, told Hamodia that while the interviewer sent a memo concluding that “there was nothing in his [Dr. Pincus’s] background or character that poses a threat,” a non-standard second interview was called for with a representative of the Office of Personnel Management.

Based on the family history Dr. Pincus provided at the first meeting, this second round, held in March 2015, seemed uniquely designed to scrutinize the subject’s connection to Israel. Of the 10 questions asked, all but one focused on this topic, including, “Ask the subject to explain why his mother, sister and brother moved to Israel,” and, “Does the subject provide any financial support to his family in Israel?”

Then, this past September, Dr. Pincus received word that his security clearance had been denied and he would not be able to continue his work at the clinic. The “statement of reasons” provided reviewed his family’s residence in Israel, his three visits there over the past 10 years (one of which was for his father’s funeral), the monthly financial support he provides for his ailing mother, and that his son, who passed away at a tragically young age, served for six months in the Israeli army.

It concludes that due to the subject’s contact with his relatives, he “may be manipulated or induced to help a foreign person, group, organization or government in a way that is not in U.S. interests, or is vulnerable to pressure or coercion by foreign interests.”

Mr. Schick said that he did not believe the story and assumed that “there has to be something else here, until I saw what the government wrote.”

“He [Dr. Pincus] was born and raised in New York. His kids and grandkids live in New York. There is no reason to suspect him of anything,” he said. “They made a decision based on where his mother and siblings live. That is contrary to the American system of justice where a person is judged based on his own behavior and attributes, not on a profile.”

Wall Street Journal editorialist Brett Stephens, who was the first to publicize the story in his column, wrote that based on his study of the Defense Office of Hearings and Appeals data base, Dr. Pincus’s case is hardly an isolated one. He notes that “since the Obama administration came to office, there have been a total of 58 cases in which Israeli ties were a significant factor in the decision. Of these, 36 applicants — an astonishing 62 percent of the total — lost their appeals and had their clearance applications denied.”

Stephens adds that in the same time period only one French citizen and no British citizens were denied clearance, and states that his findings suggest that a high level of “scrutiny” seems to be applied towards any individual “with the slightest Israeli connection.”

Department of Defense spokesman Mark Wright denied this allegation and wrote in a statement to Hamodia: “If a security-clearance applicant has relatives or other close connections to people in any foreign country, this could potentially disqualify that person from being eligible for a security clearance. The Federal Adjudicative Guidelines do not call for any special scrutiny for applicants with relatives in Israel.”

Mr. Wright added that on average, 25 to 30 percent of applicants do not ultimately pass security screenings.

Rep. Yvette Clarke, who represents the Midwood area where Dr. Pincus maintains one of his private offices, told Hamodia that she understands the community’s sensitivity to the phrase “divided loyalty” and has directed her office to contact the Department of Defense in the hopes of gaining a clearer picture of the situation.

“We are specifically trying to receive an understanding whether there was anything unusual or deviant in this case and what exactly triggers such a response within the decision-making process,” she said.

The congresswoman is not alone in presuming that some other factor, besides those made public, must have been at play in Dr. Pincus’s denial.

“This case seems to be a blatant violation. It does not appear to be on any legitimate grounds, although it is possible there were certain details that could not be made public,” said Malcolm Hoenlein, executive vice chairman/CEO of the Conference of Presidents of Major Jewish Organizations.

However, Mr. Wright’s responses to Hamodia’s questions on the matter deny this possibility.

Mr. Hoenlein added that in his office’s monitoring of such cases, while there have been similar complaints in the past, he felt the problem was “localized” and that the vast majority of Jews in all levels of government work had never encountered such issues.

While a date has not been formally set, Dr. Pincus’s appeal could be heard by the end of January. Mr. Schick said that due to the low security nature of his position — checking sailors’ teeth — he has been allowed to continue practicing at the clinic pending the outcome of the next stage of proceedings.