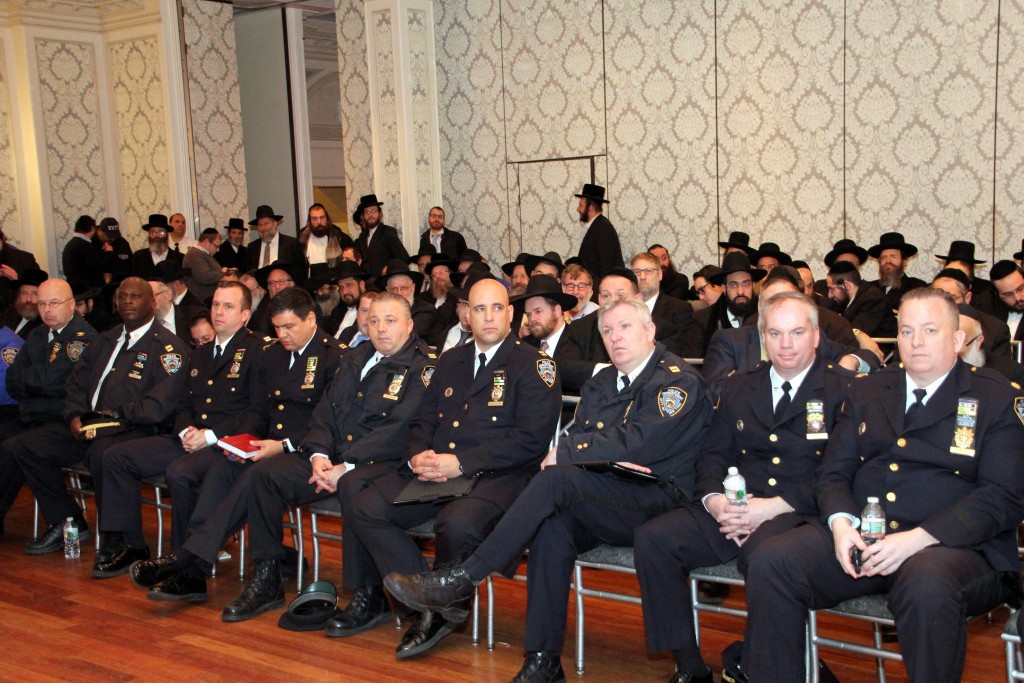 The call that came over the Shomrim hotline was heart-stopping: A man was running through a Williamsburg yeshivah building and nobody knew who he was.

“Someone is running around from class to class and we don’t know what’s going on,” the caller told the dispatcher.

Everything turned out to be fine; the man was an emotionally disturbed person who was harmless.

“But the fact that he was able to get into the school building is why we are here today,” Yanky Meyer, the head of Misaskim, told the approximately 300 yeshivah administrators and NYPD officials gathered at an event Monday, organized by Misaskim, that addressed security in yeshivos.

The call, which Shomrim handled last week, was played at the beginning of the meeting.

Amid concerns that yeshivos were not taking shooting and terror threats seriously enough, top New York City police brass and the ranking FBI agent in the city converged on a Boro Park school for a seminar on what to look out for and how to make yeshivos a harder target.

It was not the first time yeshivos participated in such an event, which was held at the Belzer girls’ school on McDonald Ave. But Monday’s event attracted a higher-ranking crowd, along with Diego Rodriguez, the FBI agent in charge of the New York office.

“We’ve been through this numerous times,” Meyer told the assembled, which included the head of the Hate Crimes Task Force, the chiefs of Brooklyn North and Brooklyn South divisions, the commanding officers of the precincts serving Boro Park and Crown Heights, as well as the heads of Shomrim of Boro Park, Williamsburg, Crown Heights and Flatbush.

Rodriguez reassured Hamodia before the seminar began that there was “no specific credible threat that we’re concerned about now.”

Addressing the event, the FBI regional director noted that as the threat from al-Qaida has been reduced in the past few years, the rise of the Islamic State poses an equal danger. “Terrorism is on the rise,” he said.

As for criminal active shooting attacks, described as a gunman in a confined place with numerous people, there has been an average of 11.4 incidents annually, since 2000. He urged yeshivos to prepare by partnering with the NYPD.

“We understand folks are uneasy,” he said. “Turn that fear into a healthy awareness.”

In this day and age, he said, residents should not hesitate to call 911, 311, flag down a patrol car or scream for help.

“If there’s nothing there then no harm, no foul,” he said. “If there is something there, then great harm could be avoided.”

Deputy Inspector Mark Magrone, head of the NYPD’s Hate Crime Task Force, detailed what causes a crime to be upgraded to hate levels and when people should report what they see.

“Most hate crimes don’t get up in the morning and say, ‘Let me commit a hate crime today’ – that’s not the way it works,” Magrone said. “The vast majority of hate crimes happen when two people bump into each other on the subway and one says, ‘Hey, you, expletive,’ then calls him by an anti-Semitic slur.”

But there is another crime that is premeditated more than 90 percent of the time: Active shooters plan extensively, usually stockpile guns ahead of time, brag to friends about their plan or attempt to recruit them, and post it on social media.

Assistant Chief Steven Powers, who heads the Brooklyn South division, which includes Boro Park, Flatbush and Crown Heights, confronted the gathered administrators. “My question to you is, what are you doing about it?” he asked.

Out of the handful of people who raised their hands, only one satisfied him.

Calling Brooklyn South an “overwhelmingly supportive community,” Powers said that the extra costs for security are well worth it.

A recently passed City Council measure – which was sponsored by Councilman David Greenfield and will be signed into law by Mayor Bill de Blasio on Tuesday – will fund private, unarmed security guards for yeshivos. But Powers said that for that “extra measure of real security,” the guards should be armed.

Assistant Chief Jeffrey Maddrey, who heads the Brooklyn North division, urged yeshivos to have a written plan on what to do in case of emergency, drill the plan with the students and not to confront a suspicious person.

Maddrey said that the first school shooting was in 1764, when Native Americans attacked a log schoolhouse in Pennsylvania, killing the schoolmaster and nine children. Since the Columbine High School massacre of 1999, there have been more than 160 active shooter incidents in schools.

“In 80 percent of the school incidents,” Maddrey said, “somebody saw something and said nothing.”