Wall St. Week Ahead — Investors Look To January Effect at Start of 2016 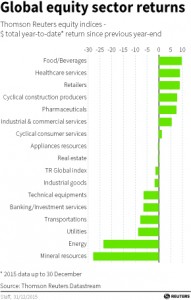 As Wall Street wraps up its flattest year since 2011, investors will have to deal with many of the same issues next year as they attempt to gauge market direction.

While many market participants have a host of worries heading into 2016 that could hurt stocks and keep volatility high, they remain optimistic for gains in 2016 and a strong start to the year could boost that case.

According to the Stock Trader’s Almanac, the direction of January’s trading predicts the course for the year 75 percent of the time.

Stocks could get a boost next week from the so-called “January effect,” when stocks that were sold off in December for year-end tax harvesting rally back in the next month as investors scoop them back up at lower prices.

Of the S&P 500 components, 301 were down 10 percent or more from their 52-week highs and 175 were off by at least 20 percent through Dec. 30, according to Ryan Detrick, market strategist at Kimble Charting Solutions in Cincinnati.

That broad decline was offset by the narrow leadership of the “FANG” stocks – Facebook, Amazon, Netflix and Alphabet. Combined, they comprise more than 5 percent of the weighting in the S&P 500 and have all risen at least 35 percent for the year.

While the overall breadth of the S&P is not promising, that may leave a broader swath of stocks that could see a rebound next month, according to Jeff Saut, chief investment strategist at Raymond James Financial in St. Petersburg, Florida.

“The individual investor is in hibernation. There are six distinct stages to a secular bull market and we are nowhere near euphoria, nowhere close, unless you own the FANGs,” said Saut.

Despite the flat performance to finish out the year, stocks grappled with volatility throughout 2015. The S&P has moved at least 1 percent on a daily basis in either direction 72 times, the most since 2011, according to Standard & Poor’s data.

The S&P 500 notched a record high of 2,130.82 on May 21 as middling economic data eased expectations for a rate hike from the U.S. Federal Reserve. But three months later, the benchmark had fallen into correction territory, a drop of 10 percent from its high, when signs China’s economy may be slowing faster than expected unnerved investors and a Fed rate hike drew closer.

“It turned into a big nothing. We are essentially where we started the year. We had a lot of volatility in between,” said Ken Polcari, Director of the NYSE floor division at O’Neil Securities in New York.

“In retrospect, actually, it could have been a disaster and it really ended up kind of flat, so I count that as a win, once you add in dividends.”

Along with the return of many investors after the end-of-the-year season, the economic calendar is more active, culminating with Friday’s payrolls report.

But while recent jobs reports have been closely monitored for signs the Fed will begin to raise rates, the influence of the report may be muted due to the recent hike by the Fed and its intention to continue raising at a gradual pace.

“The Fed knows it needs to be careful and they are going to be careful,” said Scott Wren, senior global equity strategist at Wells Fargo Investment Institute in St. Louis.