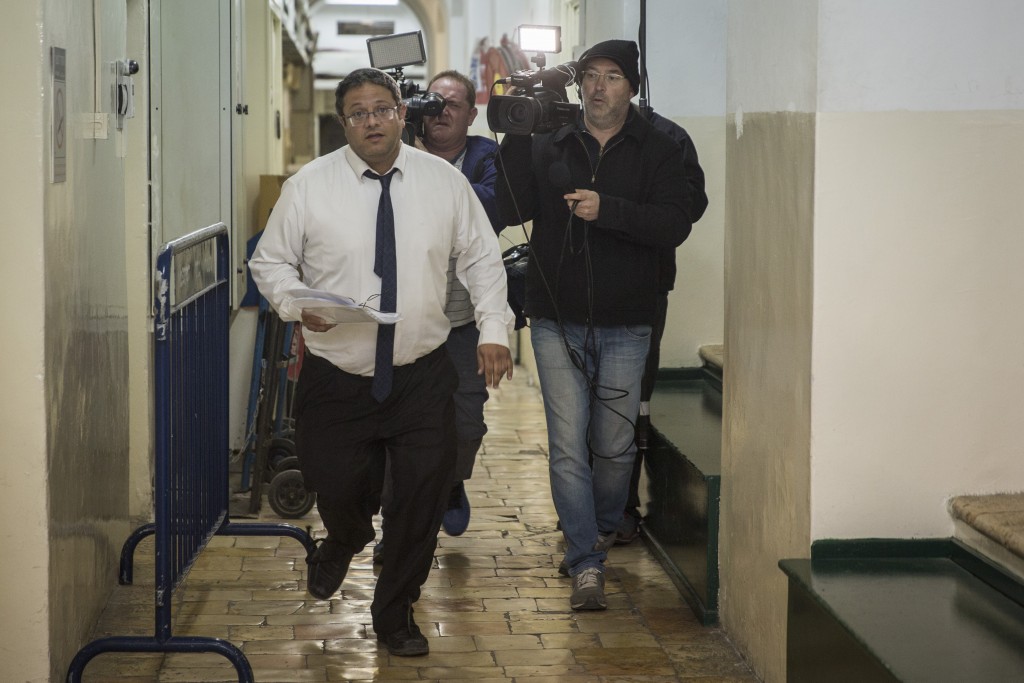 The Israeli security services and the police waited for this moment a long time, when they could come out and answer all the criticism of their methods of arrest and interrogation.

On Sunday the moment came, when the legal charges were made, when the gag orders were removed, and at last the senior officials of the Shin Bet and the Police could have their say and put the facts on the table.

And at the top of the list, “the main culprit in the firebombing of the Arab family Dawabsha in the village of Duma, confessed to the crime, and even re-enacted it.” This is perhaps the central message of Sunday’s revelation, but it fits in, according to the view of the Shin Bet, into the overall picture. They believe that they have uncovered a plot to overthrow the government, nothing less.

A 21-year-old youth from Yerushalayim — was being charged with murder in the case in which an 18-month-old baby was burned to death, while his parents succumbed to their injuries later.

Assisting the main suspect was a minor, who is being charged as an accomplice.

Shin Bet officials said that the actions of their work has thwarted a new Jewish terrorist group, called by the interrogators, the “Revolt Group.”

It emerged from the questioning of the suspects that in October 2013 an ideology took hold among the hilltop youth in Yehuda and Shomron, which was directed against the “state that is keeping us from building the Beis Hamikdash, that is holding back the Geulah sheleimah.”

The Shin Bet said that the leaders arose from among the veteran hilltop activists. In the course of time, this ideology became the dominant one and made the danger more serious that progressed from mere vandalism of Palestinian property to lethal attacks on innocent people.

The group tried to propagate their world-view and to enlist broader support, but to date, the Shin Bet stresses, without success. The organization does not operate through an orderly hierarchy, but rather works through activists and groups in the hilltops, who share the same idea and pursue it independently without coordination.

Senior Shin Bet officials say that “the main idea was the overthrow of the state and the establishment of a Jewish government.” This was to include the installation of a king, elimination of idolatry, expulsion of non-Jews, and so on.

The Shin Bet displayed a raft of written documents confiscated from the “Revolt Groups,” that declare, among other things, that “the state of Israel has no right to exist…we are not obligated to play by the rules…first we have to destroy, only then can we build…”

The documents outlined an agenda, which included, first spreading the idea and recruiting “soldiers”; the next phase, to intensify the activity of revolt; the third stage being the full outbreak of revolt against the state; and the final “decisive phase,” in which the state will either concede defeat, agree to a referendum, or suppression that will itself bring on the revolution.

The documents also described a plan for the setting up of cells of 3-5 members all over the country, each of whom will decided on their own when they “can no longer sit quietly” but must rise up and act.”

The Shin Bet revealed on Sunday that in the course of the tracking and interrogations of the groups about 40 people were arrested, almost all hilltop activists, who were described as the ‘hard core,” many of whom supported the revolt.

Their ages ranged from 15 to 24, about half of those questioned were minors, in north/central Binyamin, in particular Gush Shilo (Geulat Tzion).

The Shin Bet said that it had been on the trail of the group behind the Dawabsha family from the outset last July. From that time, they focused on three objectives: Preventing another terror attack, dismantling the network, and catching the culprits in the Duma case.

In all, 4 youths were held in administrative detention, 2 in house arrest, 13 overnight house arrest, and another 36 were placed under administrative restrictions. Some were released after it was determined that they were not involved in any criminal activity. In the end, indictments were filed on a range of charges against 36 members of the group.

In addition, 23 youths were found guilty of involvement in 20 attacks on Arabs, including rock-throwing, arson, and vandalism. Prosecution will be decided on in due course.

Major resources of the Police, Shin Bet and the IDF were enlisted in the investigation from the time of the Duma bombing. In the course of investigating the Duma incident, some of the suspects were also discovered to be linked to a series of other crimes, including arson attacks on churches, vandalism of Arab-owned cars, tire puncturing, cars set on fire, the setting on fire of a grain storage shed, an attack on a shepherd near Kochav Hashachar, and more.

The commander of the Yehuda and Shomron District, Shlomi Michaeli, on Sunday praised the cooperation of the Shin Bet and the police in solving the “very complicated investigation” into the Duma attack. He said that the issuing of the indictments on Sunday shows “there are no shortcuts in the fight against terror.”

Itamar Ben Gvir, the attorney for the main defendant, has protested that the methods used to obtain confessions from his client were illegal, and said that there is still a cloud of secrecy over the interrogations.

“If the Shin Bet has nothing to hide, why can’t the Israeli public be informed as to what happened?” he asked.

The parents of the primary defendant voiced absolute condemnation for the arson in Duma, but insist that their son is innocent. His father called upon the court to examine the method of interrogation used to extract a confession for a crime he did not commit.

The accused’s wife said that during his arrest they beat her husband severely in front of her eyes, and confiscated cameras so that there would be no evidence of it. “All this is just because he wears a kippa and peyot,” she charged. “He didn’t do anything. It’s political persecution.”

The Shin Bet says that the investigation is ongoing, while dozens more activists are still at large and liable to carry out more attacks.

This is the case so far. But on consideration, it is already possible to say that the Shin Bet is right, but has been frighteningly naive.

The security forces have been doing their job, striving constantly to make life safe for Israel’s citizens. When acts such as these are perpetrated, which threaten the very basis of a civilized society, it is certainly their responsibility to investigate and bring the criminals to justice.

When there are rumors and allegations that improper methods have been used during interrogations, it is permissible to request a probe of the matter. Especially when the officials swear up and down that there is no basis for the accusations. There are governmental bodies whose responsibility it is to oversee the investigators. They are not above the law. It is possible that during the interrogations, there were breaches of accepted procedure. There is no place for such violations, though it is not a reason to call off investigations and the search for the truth.

However, it pains us to say that the results of this great investigation presented on Sunday amounts to one great farce. How terribly naïve can the Shin Bet be as to present a group of 30-40 obscure youths from the hilltops as a danger to the state, a “new underground” that threatens to make a revolution and to crown a king tomorrow? It’s a disgrace to treat the matter seriously.

In the final analysis, we are talking about a scattered group, in both senses of the phrase, a few dozen young people, most of them acting on their own and independently.

The attempt to present them as “an underground that is seeking to overthrow the state,” and to treat each incident as part of an organized campaign, and to try to frighten the citizenry with this “great danger that has been thwarted,” is pardon the expression, one big farce.