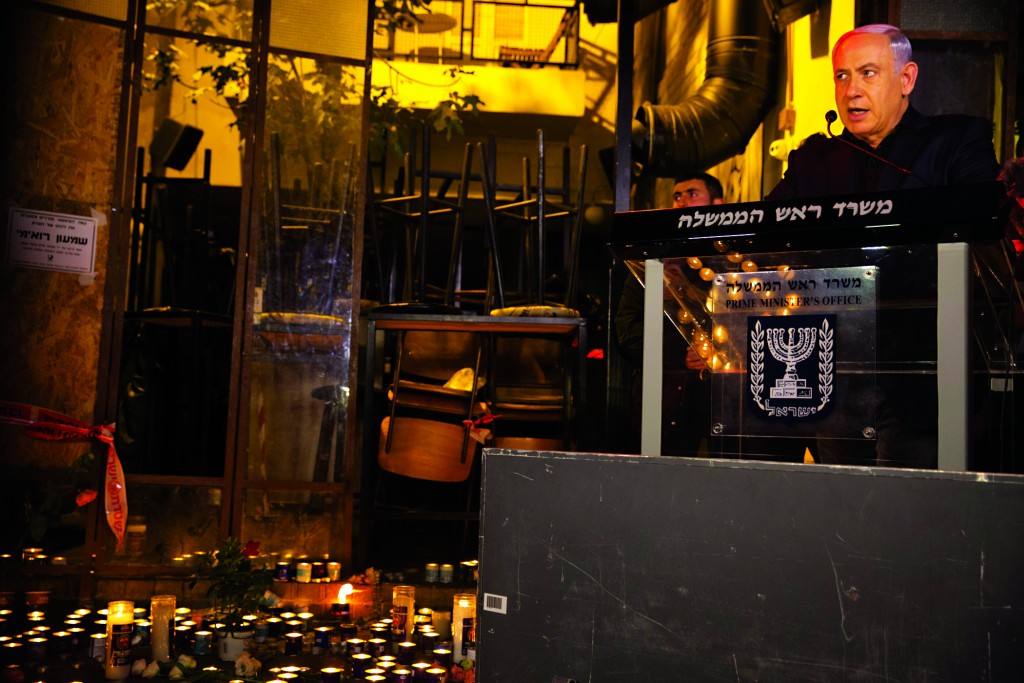 As of late Sunday night, more than 48 hours after the deadly rampage in central Tel Aviv that left two dead and several wounded, Israeli security forces had still not caught up with the gunman.

The huge manhunt continued all across the city through Sunday, though concentrating on the northern parts such as Ramat Aviv, where the attacker’s cellphone was found on a sidewalk by a passerby shortly after the attack on Friday.

A police appeal to the public for information about the whereabouts of the killer has led to a flood of calls to an emergency hotline. Spokesperson of the Tel Aviv police, Chief Superintendent Hila Hamo, said Sunday that police had seen a 1000% increase in the number of distress calls in the past 48 hours, most of them describing suspicious persons.

Police have told people not to hesitate to call if they spot someone they think may be the suspected murderer, 31-year-old Nashat Milhem of Ar’ara.

Many parents kept their children home from school on Sunday due to the fear of the at-large gunman.

Police said Sunday there are further details of the investigation that they are not publicizing for the time being in order not to thwart their efforts to find the killer. There remains a gag order on the investigation of the shooting attack, and the same gag order secured on Friday also applies to the murder of Shaaban.

Police on Motzoei Shabbos revealed that they had identified the shooter who opened fire on a group of restaurant patrons in Tel Aviv on Friday afternoon. Mashat Melhem, 29, from the Galilee Arab town of Ar’ara, was named as the shooter who killed two Israelis on the outdoor seating area of the Simta café on Dizengoff Street in central Tel Aviv.

Melhem is still at large, and is thought to be hiding in an out-of-the- way location that he probably prepared in advance of the attack. Police asked the public to report anything that seemed suspicious. Contrary to previous suppositions, it appeared that the attack had been precisely planned. Investigators have not indicated whether or not Melhem was acting on behalf of a terror group, and no such groups have yet taken responsibility for the attack.

Police said Saturday night that they had arrested Melhem’s brother on charges of assisting in the shooting. His remand has been extended for at least five days as police gather evidence against him. So far, police have not declared the shooting as a terror attack.

The two Israelis who were killed in the attack were named as Alon Bakal, 26, who was the manager of the Simta café, which Melhem apparently targeted in his attack. The second victim was named as Shimon Ruimi, 30, from Ofakim. Six others are still in local hospitals being treated for their wounds.

According to police, Melhem had murdered a third individual earlier Friday — an Israeli Arab cab driver.

It was Melhem’s father who tipped off police on the identity of the shooter. Footage of the younger Melhem was released late Friday, and broadcast on Israeli media outlets, as police asked for the public’s assistance in identifying the killer. The elder Melhem was questioned extensively by police, and they were given a full picture of the son’s social contacts and mental history.

In a statement to the press, Melhem’s father said that he was “an Israeli citizen, who observes the law. I heard about what my son did and I wanted to say that I did not educate him in this way. I am very sorry about what he did. I went to the police in order to assist them. I never imagined he would do something like this.”

Melhem was arrested in 2007 for attempting to steal a weapon from an IDF soldier. Under questioning, he admitted that he had planned to carry out a terror attack with the stolen weapon in order to avenge the death of a cousin 10 years earlier by a police officer. An attorney for the family said that Melhem “was not stable or sane. He has been acting strangely for a long time. He served four years in prison for the attempted terror attack, and apparently his mind went bad while he was there.”

The Ar’ara city council condemned the attack, saying that it was “a personal act that did not represent the people of our town, or the Israeli Arab public. This kind of behavior is foreign to the residents of Ar’ara. We send our condolences to the families of the victims and hope for the speedy recovery of the injured.”