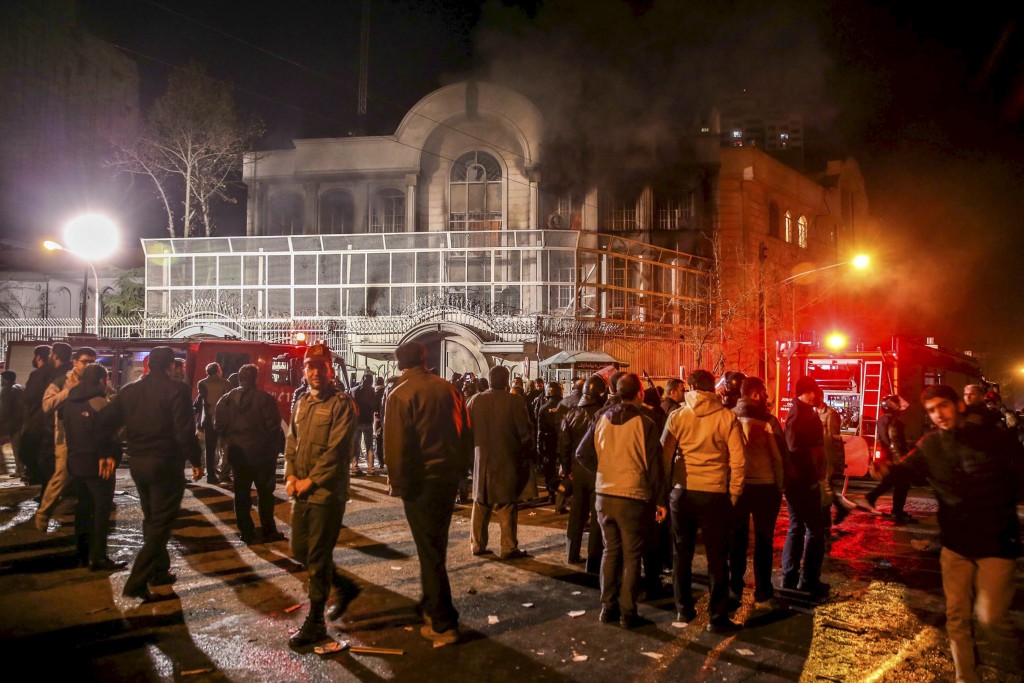 Demonstrators who had massed at the embassy gates to protest Nimr al-Nimr’s execution broke into the embassy and started fires before being cleared away by the police, Iran’s ISNA news agency reported. Pictures were tweeted that showed parts of the interior on fire and smashed furniture inside one office.

Iran’s hardline Revolutionary Guards had promised “harsh revenge” against the Saudi Sunni royal dynasty for Saturday’s execution of Nimr, considered a terrorist by Riyadh but hailed in Iran as a champion of the rights of Saudi Arabia’s marginalized Shiite minority.

Nimr, the most vocal critic of the dynasty among the Shiite minority, had come to be seen as a leader of the sect’s younger activists, who had tired of the failure of older, more measured leaders to achieve equality with Sunnis.

Although most of the 47 men killed in the kingdom’s biggest mass execution for decades were Sunnis convicted of al-Qaida attacks in Saudi Arabia a decade ago, it was Nimr and three other Shiites, all accused of involvement in shooting police, who attracted most attention in the region and beyond.

The move appeared to end any hopes that the appearance of a common enemy in the form of the Islamic State militant force would produce some rapprochement between the region’s leading Sunni and Shiite Muslim powers, who back opposing sides in wars currently raging in Syria and Yemen.

The website of Iran’s Supreme Leader, Ayatollah Ali Khamenei, carried a picture of a Saudi executioner next to notorious Islamic State executioner ‘Jihadi John’, with the caption “Any differences?”, and Iran’s powerful Revolutionary Guards said “harsh revenge” would topple “this pro-terrorist, anti-Islamic regime”.

In Iraq, whose Shiite-led government is close to Iran, prominent religious and political figures demanded that ties with Riyadh be severed, calling into question Saudi attempts to forge a regional alliance against Islamic State, which controls swathes of Iraq and Syria.

The 43 Sunni jihadists executed on Saturday, including several prominent al-Qaida leaders and ideologues, were convicted for attacks on Western compounds, government buildings and diplomatic missions that killed hundreds from 2003-06.

After the executions, Islamic State urged its supporters to attack Saudi soldiers and police in revenge, in a message on Telegram, an encrypted messaging service used by the group’s backers, the SITE monitoring group reported.