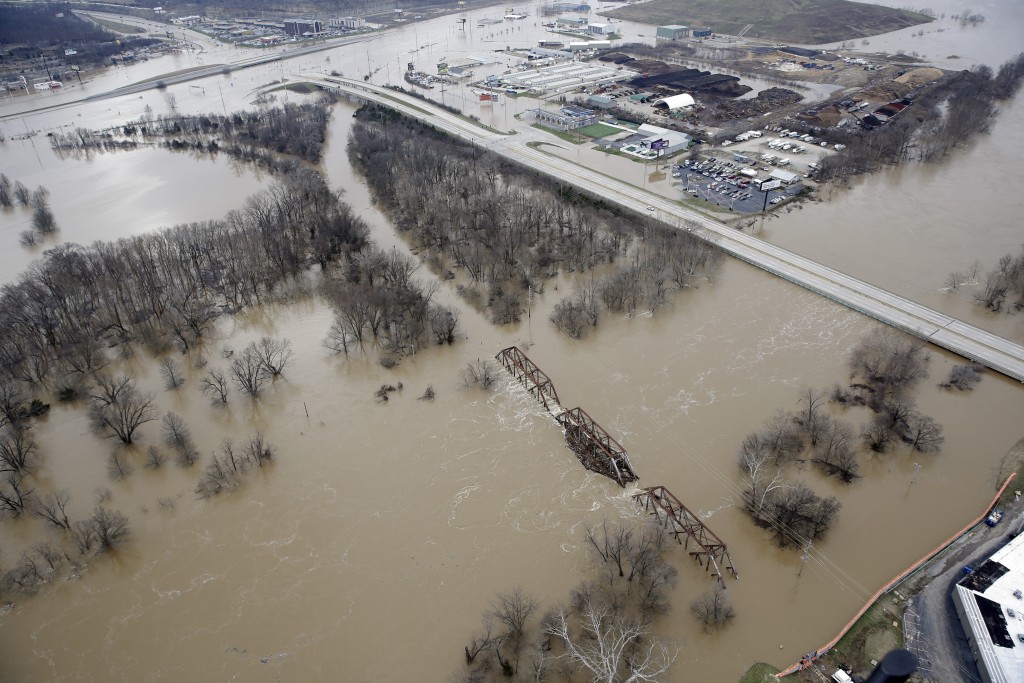 Water from a rare, record-setting winter flood was receding in the St. Louis area Friday, allowing some major roadways to reopen and offering hope for flood-weary residents that the worst of this sudden catastrophe was behind them.

For others, the worst is still to come, with expected crests in coming days in southern Missouri, southern Illinois, then onto Arkansas, Tennessee and other southern states.

But the impact isn’t expected to rival what was seen this week in suburban St. Louis. The city itself, protected by a flood wall and a sloping geography that keeps downtown and most homes out of harm’s way, remained mostly dry. The southern suburbs were another story. The Mississippi River fell short of a record crest by about 7½ feet at St. Louis, and damage on the Missouri River was limited.

The biggest problem was the Meramec River, a smaller tributary of the Mississippi. Some points along the river topped the 1993 record by 4 feet, forcing the evacuation of hundreds of homes and businesses in southwest St. Louis suburbs like Pacific, Eureka, Valley Park and Arnold. Several hundred homes took in water, and residents are just beginning to assess the damage.

With water finally going down, the Missouri Department of Transportation was able to reopen northbound lanes of Interstate 55 south of St. Louis on Thursday, about a day after they were closed, and southbound lanes opened Friday morning.

MoDOT spokeswoman Shaunda White said 76,000 vehicles pass through that area on a typical day, “so that’s going to be a significant relief.”

Water also shrank from Interstate 44, where a 24-mile stretch southwest of St. Louis has been closed for two days. White said that crews still needed to clear debris and ensure that the roadway was safe before reopening it.

The devastating flood, fueled by more than 10 inches of rain over a three-day period that began last weekend, has been blamed for more than 20 deaths. Four people are still missing – two teenagers in Illinois and two men in southwest Missouri.