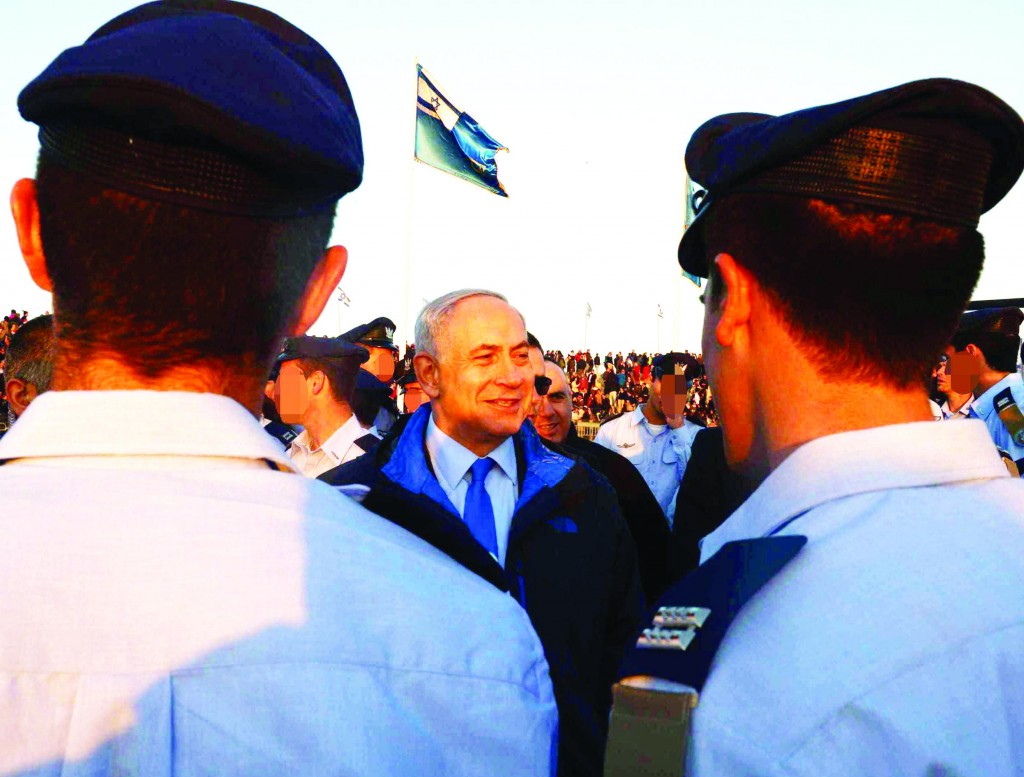 Israeli Prime Minister Binyamin Netanyahu hinted on Thursday afternoon during remarks made at an IAF pilots graduation ceremony that “the events in the Mideast are creating new alliances that promise to help in attaining the peace we all desire.”

The prime minister accused radical Islam of aspiring to conquer the entire region, and after that, the rest of the world.

“The IDF, the police, the Border Police, the Shin Bet,” Netanyahu added, “have in recent months been aggressively combating terrorists, rioters, and the struggle is waged against violators of the law on every side. We will not tolerate murderers in our midst. The large-scale operations of the security forces, are carried out in both defense and attack, without restrictions. When we stand together as one, united, no enemy can prevail over us, and this is true regarding bloodthirsty terrorists, and in the same way in the struggle against radical Islam.”

“The threat against our civilization from radical Islam has two prongs: the Shi’ite led by Iran, and the Sunni led by Islamic State. The earthquake that these two streams are causing in our region sends shock waves to continents and countries far away. I foresee that these waves, that shake the stability of every place that they reach, will only get stronger. The tidal wave will not stop by itself. The only thing that can stop it is if the governments of the free world internalize the gravity of the danger. This, perhaps, is beginning to happen, but not altogether,” Netanyahu said.

“In this confrontation,” Netanyahu continued, “there exists an obvious asymmetry. Radical Islam surges forward without stopping, carries on clandestine alliances, slaughters hundreds of thousands and turns millions into refugees.

“On the other hand, the free world, which humanely seeks to avoid harming innocent people and violating human rights, responds with less vigor than is needed to these events. But history has taught us that in standing up against the forces of evil, we have to turn the tide, not wait for the next attack, but to pursue the criminals and the terrorists in their strongholds. This is exactly our policy, to cut off any threat, nipping it in the bud. We will not let our enemies endanger the security of Israel. We will strike down whoever rises against us to harm us. There is a time to hold back and a time to strike forth.”

“The two Islamic states, Iran and Islamic State, menace many others, but they first and foremost threaten our existence. We are not hiding from these threats, but we are not afraid of them either.

“The recognition that Israel has the determination to act against our common enemies is rapidly spreading around the world. No less important than this is that it is spreading here, in the Middle East. It is creating new, even surprising, alliances, and perhaps in the course of time it will also help to stabilize the region and bring peace.”

Defense Minister Moshe Yaalon also arrived at the ceremony, which was held at the Hatzerim Air Force base outside Be’er Sheva, in his helicopter. He brought guests with him: the parents of two Israeli soldiers who were missing — Shaul Oron and Hadar Goldin — as well as wounded soldiers Ohed ben Yishai, who was critically wounded in Operation Protective Edge, and Yerin Ashkenazi and Yuval Appel, who were seriously wounded during the current wave of terror.

“Also, now, our enemies should know,” Yaalon said, “that we have no intention of compromising on the security of the citizens of Israel. The organizations of terror on the other side of the border, every border, should not make the mistake of testing us. We will act with great determination, but also with deliberateness and responsibility.”