National Death Toll in Mo. and Ill. at Least 20
National 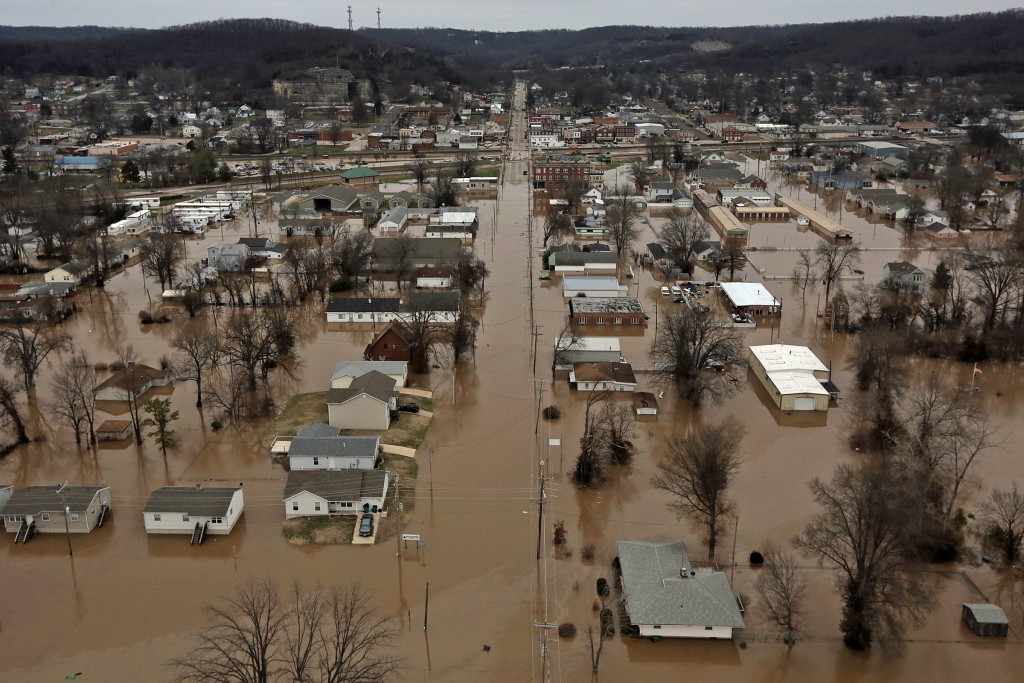 Though the Mississippi River and its tributaries didn’t top the 19 vulnerable levees that federal officials were monitoring, the dangers from a rare winter flood remained throughout Missouri and parts of Illinois on Wednesday.

Swollen rivers and streams were pushed to heights not seen since the massive 1993 floods, causing Illinois to transfer an unknown number of inmates from a state prison and declare disasters in seven counties, and prompting Missouri’s governor to activate the National Guard to help divert traffic away from submerged roads.

At least 20 deaths over several days in Missouri and Illinois were blamed on flooding, mostly involving vehicles that drove onto swamped roadways, and at least two people were still missing Wednesday. Some parts of interstates in Missouri reopened, while others were still covered by water.

In southwestern Missouri, residents of about 150 duplexes and homes in the tourist town of Branson had to evacuate Wednesday when flooding from a manmade lake threatened. But the shopping district along the lake was still open, Fire Chief Ted Martin said, adding, “it has been packed with people, and I don’t know where all of them have come from.”

Sixty miles to the north in Pleasant Hope, the emergency management director said crews are looking for a missing motorist.

“Nobody that is living has ever seen anything like this,” Rick Davis said.

Record flooding was projected in some Mississippi River towns after several days of torrential rain that also caused sewage to flow unfiltered into waterways.

The Meramec River near St. Louis is expected to get to more than 3 feet above the previous record by late this week. The river on Tuesday spilled over the top of the levee at West Alton, Missouri, about 20 miles north of St. Louis. Mayor William Richter ordered any of the town’s approximate 520 residents who had not already evacuated to get out of harm’s way.

Across the river, in Alton, Illinois, dozens of volunteers helped place sandbags ahead of where water is expected to rise. Mayor Brant Walker said in a statement that flooding was expected at least in the basements of the downtown business district.

The normally docile Bourbeuse River reached the roofs of a McDonald’s, QuikTrip and several other businesses in the eastern Missouri town of Union, where the river reached an all-time high Tuesday.

Interstate 44, which had been closed on and off for the past few days, was closed Wednesday in southwest St. Louis County, but the westbound side of the interstate near the central Missouri town of Rolla reopened. Hundreds of smaller roads and highways were also closed across the two states, and flood warnings were in effect.

In southern Illinois, the Department of Corrections transferred an unspecified number of inmates from a state prison to other locations because of flooding risks. The facility houses nearly 3,700 inmates.

The Mississippi River is expected to reach nearly 15 feet above flood stage on Thursday at St. Louis, which would be the second-worst flood on record, behind only the devastating 1993 flood.

The U.S. Coast Guard closed a five-mile portion of the Mississippi River near St. Louis due to flooding. Capt. Martin Malloy cited high water levels and fast currents in the river, which is a vital transportation hub for barges that carry agricultural products and other goods.

The high water was blamed on the shutdown of a wastewater treatment plant on Monday just south of St. Louis, causing sewage to go directly into nearby rivers and streams. And one of two wastewater plants in Springfield, Missouri, also failed, allowing partially treated sewage to flow into a river.