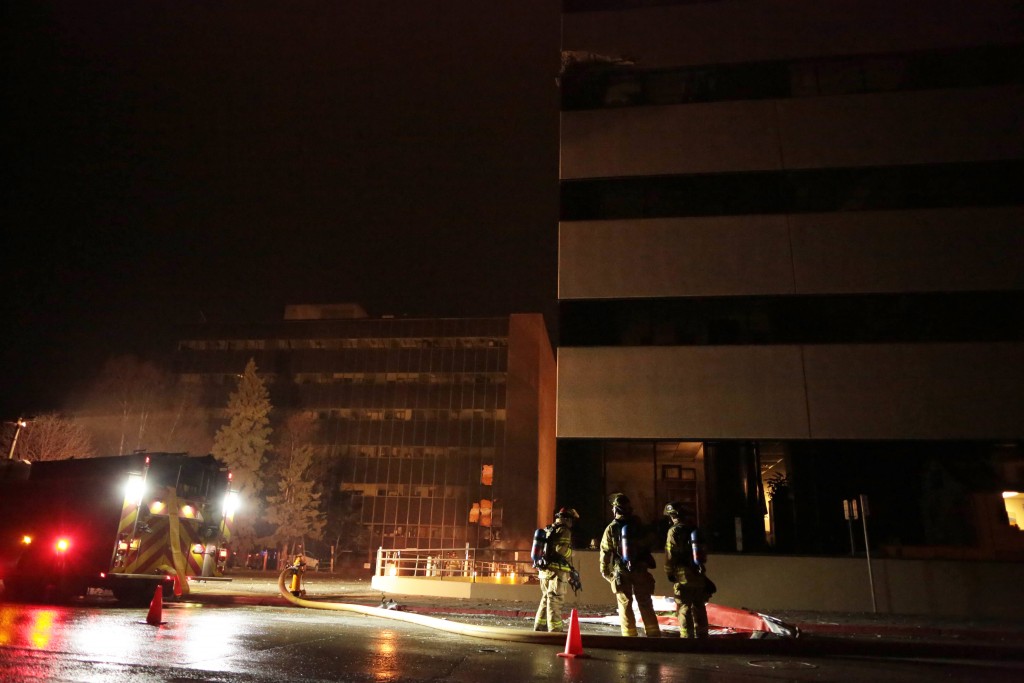 Anchorage police said they first received reports that a small plane crashed into a building at 6:19 a.m. Tuesday.

Anchorage police spokeswoman Anita Shell said the plane was reported to be fully engulfed in flames by 6:22 a.m.

By 6:53, Anchorage Fire Department officials said the fire was extinguished and firefighters were working to control smoke in buildings.

Several blocks of downtown were blocked off and expected to remain so for several hours, according to fire officials.

The Brady Building is a 90,000-square-foot downtown office building. It was struck about four stories up.

The building houses offices of the state departments of Law and Corrections and the district attorney’s office. Those offices were closed Tuesday morning, according to the state Department of Administration.

Alaska Gov. Bill Walker was on the scene shortly before 8:00 a.m.

Anchorage Fire Department battalion chief Alex Boyd said the plane struck a building as it crashed, then came to rest against a second building.

Boyd said there was one confirmed fatality, an occupant of the plane, but officials didn’t immediately know how many occupants the plane had.

“The aircraft occupant is the only fatality we know of,” Boyd said. There were no injuries on the ground, he said.

Boyd said the airplane struck an electrical transformer on the outside of a building as it crashed, which forced authorities to shut down power to the area.

National Transportation Safety Board Alaska Office Chief Clint Johnson said the plane, which he believed was a Cessna 172 or 180, was registered to the Civil Air Patrol.

It likely had a single occupant at the time of the crash, Johnson said, and a flight plan hadn’t been filed.

The flight appeared to have been unsanctioned.

“APD made contact with Civil Air Patrol management,” Johnson said. “There were no sanctioned flights scheduled at this time.”

Johnson says initial accounts suggest the plane approached Anchorage from over Cook Inlet before it crashed.

“I [saw] the plane coming in and it did a total complete turn and then boom” said Thomas Connell, who witnessed the crash.

“It flew over us twice and then crashed,” Connell said. “It was just way low, and then it started sinking on in.”