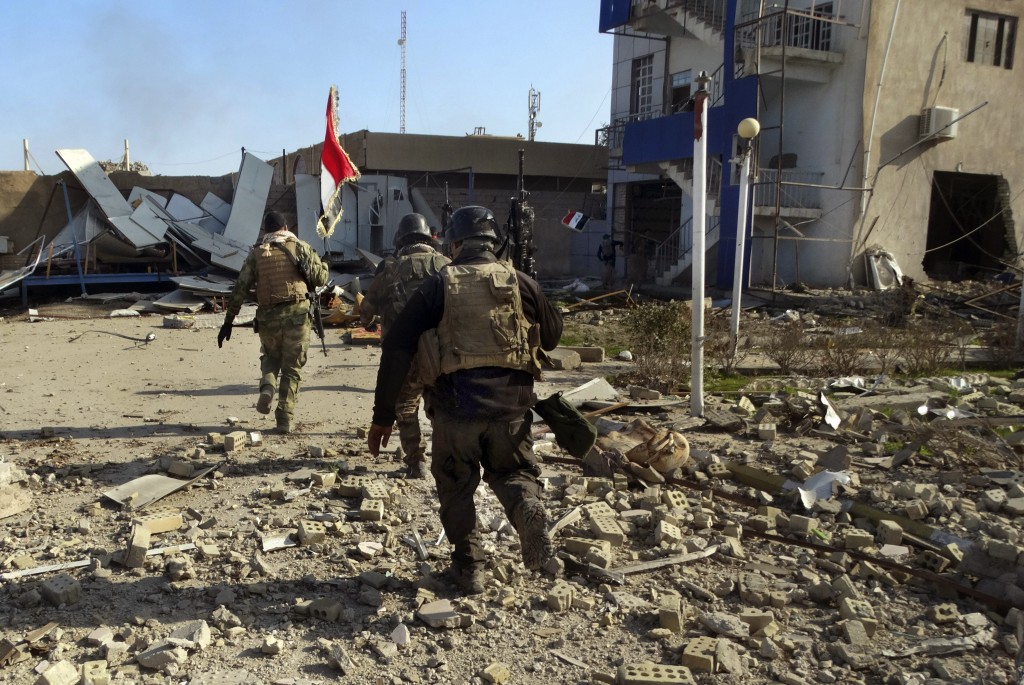 The Iraqi military said Monday that its forces have recaptured the main government complex in Ramadi from Islamic State terrorists who have occupied the city since May, scoring a strategic victory and giving a morale boost to the country’s struggling security forces.

Anti-terrorism troops hoisted the national flag atop the key complex in the long-contested Sunni Muslim city west of Baghdad, Brig. Gen. Yahya Rasool, Iraqi joint operations spokesman, said in a televised statement. Iraqi state media broadcast footage of Iraqi troops celebrating inside the government compound Monday. Some could be seen slaughtering a sheep, while others raised their weapons and danced.

Rasool claimed that Ramadi had been fully liberated. However, Maj. Gen. Ismail Mahalawi, head of operations in Iraq’s western Anbar province, later told reporters that the terrorists still controlled parts of the city; fighting was reported in downtown Ramadi as well as in some communities on the city’s eastern and northern outskirts.

The recapture of Ramadi, the Anbar provincial capital and its most populous city, would be the most significant in a series of recent successes by the Iraqi forces, which collapsed in the face of rapid Islamic State advances in mid-2014. Since the spring, the militants have been driven from the northern cities of Tikrit and Beiji, as well as Sinjar, a northwestern town near the Syrian border.

Since IS still controls large stretches of Iraq and neighboring Syria, some defense experts caution that it is too soon to speak of a turning point in the struggle against them. “It’s a good tactical victory,” said Ben Connable, a retired Marine Corps intelligence officer who served three tours in Iraq before joining the Rand Corp., a think tank. “But really, we are just back to where we were six months ago. So to paint this as a strategic victory against Islamic State I think is a gross exaggeration.”

U.S. defense officials, however, said Monday’s victory was as important symbolically and politically as it was militarily. “The clearance of the government center is a significant accomplishment and is the result of many months of hard work,” Col. Steven Warren, a spokesman for U.S. forces in Iraq, said in a statement. He said the U.S-led coalition, which includes major European and Middle Eastern powers, had carried out more than 630 airstrikes in the area, provided training and advice to Iraqi units, and contributed specialized equipment to clear explosives.

“The fight for Ramadi demonstrates how capable, motivated local forces backed by coalition air support and training can defeat ISIL,” said U.S. Secretary of Defense Ash Carter, using a common acronym for Islamic State. “Now it’s important for the Iraqi government, working with provincial and local authorities, to seize this opportunity to maintain the peace in Ramadi, prevent the return of ISIL and other extremists, and facilitate the return of Ramadi’s citizens to the city.”

The United States and the coalition have pledged over $50 million to a United Nations Development Program fund to support efforts to rebuild and stabilize areas seized from Islamic State, Secretary of State John F. Kerry said in a statement.

The seizure of the government compound in Ramadi followed a week of intense fighting as Iraqi Prime Minister Haider al-Abadi’s forces pressed into the center of the heavily-defended city after seizing ground on the periphery.

All the bridges leading into Ramadi had been destroyed before the advance began, U.S. and Iraqi officials said. Barriers had been erected on every street and the ground seeded with explosives. There were also sniper nests and mortar batteries to contend with, they said.

“Now will be a process of going block by block … clearing out booby traps and clearing out small pockets of resistance,” Warren told the Los Angeles Times. “That could take time. Ramadi is a fairly large, densely populated center. Every house is a potential bomb.”

The city could provide an important base of operations for Iraqi forces as they attempt to recapture other parts of the fertile Euphrates River valley, which stretches from the outskirts of Baghdad to the Syrian border, and press north toward Mosul.

Part of Islamic State’s strength has been its ability to recruit foreign fighters who are eager to join the group’s self-declared caliphate. That may be harder to do when the caliphate is contracting rather than expanding, according to Stephen D. Biddle, a defense policy expert at George Washington University.

The terrorist group did not appear to be conceding a defeat. On Monday, an Islamic State-affiliated site known as Minbar dismissed government claims of having liberated the Ramadi government complex, saying the group’s forces had destroyed the facility months ago.

Still, the gradual loss of territory will dent Islamic State’s tax base, one of the main sources of revenue for the terrorists, Biddle said. That in turn, could erode the group’s ability to conduct military operations and lead to further territorial losses. But he said he would be surprised if this happens quickly. “It won’t look like a blitzkrieg,” he predicted.

Connable noted that the Iraqi government has been relying heavily on its own counterterrorism service, an elite force that has proven effective in battle but that does not have sufficient manpower to simultaneously secure territory it has seized and conduct new operations elsewhere.

In Anbar province, the Iraqi government is planning to tap Sunni tribal fighters who have received training from the coalition,  as efforts are underway to build up the local police force, Warren said.

The U.S. military used that strategy effectively when it was battling Islamic State’s precursor, al-Qaida in Iraq. But Connable said the number of Sunnis willing to side with the Shiite Muslim-led government in Baghdad is now a fraction of what it was during the last decade. He praised al-Abadi’s decision not to use Iranian-backed Shiite militias that have proven a potent force elsewhere in the country but have been accused of revenge attacks against Sunnis. However, he questioned whether Sunni tribal fighters and regular Iraqi soldiers would manage to stand up to future attacks from Islamic State — a persistent problem in areas freed from the terrorists.

“Just because ISIL has been pushed out of Ramadi for now doesn’t mean they won’t be back,” Connable warned.