Texas Cleans Up After Twisters, Snow and Ice Pelt Midwest 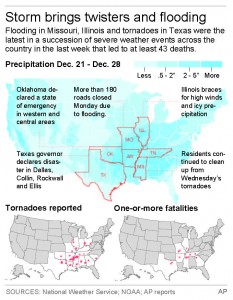 At least 11 people died and dozens were injured in the tornadoes that swept through the Dallas area Saturday. Snow from New Mexico through the Midwest, plus flooding in Arkansas, Missouri and Illinois, added to the succession of severe weather events across the country in the last week that led to about four dozen deaths.

With rain all day Sunday keeping people away, people in the Dallas area worked on a dreary and frigid Monday to salvage what they could, with the American Red Cross distributing items like tarps, rakes and work gloves to help them.

The storm brought heavy snow, ice and blustery winds to several states in the nation’s midsection, as well as heavy rain in already-waterlogged areas.

More than 2,100 flights across the U.S. were canceled Monday — more than half of them at Chicago’s two main airports — and 3,700 were delayed, according to flight-tracking service FlightAware. A typical day sees about 150 cancellations and 4,000 delays.

Highways turned icy and treacherous in New Mexico, while Oklahoma Gov. Mary Fallin declared a state of emergency after blizzard conditions affected parts of the state and heavy rains fell as well. Officials in Arkansas said a 31-year-old man died in a storm-related drowning.

Several inches of rain caused flooding in Illinois and Missouri, where Gov. Jay Nixon also declared a state of emergency. Nixon says the state’s death toll from days of pounding rainfall has risen to 10, and he expects that number to grow.

The Mississippi River neared a potential record crest after an unusual amount of late-fall rain had the river already high before torrential downpours that began Saturday.

Texas Gov. Greg Abbott made disaster declarations Sunday for four counties — Dallas, Collin, Rockwall and Ellis. Officials estimated that as many as 1,450 homes in North Texas were damaged or destroyed by at least nine tornadoes.

The National Weather Service has said an EF-4 tornado, which is the second-most powerful with winds up to more than 200 mph, hit Garland. Eight people died there, 15 were injured and more than 600 structures, mostly single-family homes, were damaged.

This article appeared in print on page 3 of the December 29th, 2015 edition of Hamodia.