National Large Storm Brings Twisters, Floods – And It’s Not Over Yet
National 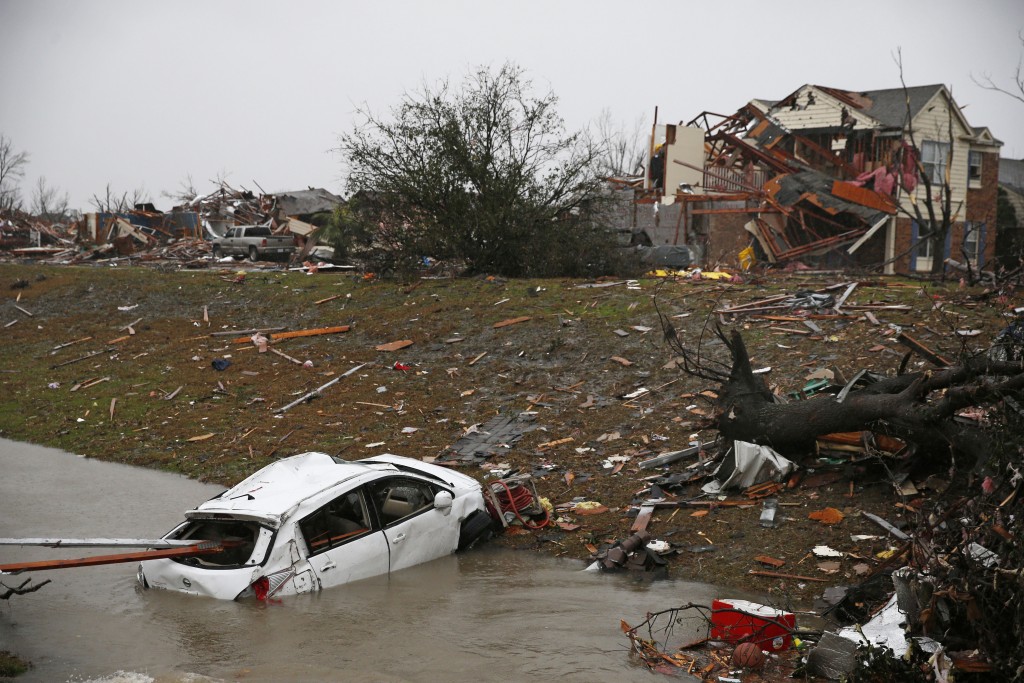 As residents of North Texas surveyed the destruction from deadly weekend tornadoes, the storm system that spawned the twisters brought winter storm woes to the Midwest on Monday and amplified the flooding that has blamed for more than a dozen deaths.

At least 11 people died and dozens were injured in the tornadoes that swept through the Dallas area on Saturday and caused substantial damage. That, plus the flooding in Missouri and Illinois, was the latest in a succession of severe weather events across the country in the last week that led to at least 43 deaths.

A range of precipitation was forecast Monday for the country’s midsection, including heavy snow, ice and blustery winds in parts of 11 states and heavy rain in already-waterlogged parts of Missouri and Arkansas.

In North Texas, local officials estimated as many as 1,450 homes were damaged or destroyed by at least nine tornadoes.

“This is a huge impact on our community and we’re all suffering,” Garland Police Lt. Pedro Barineau said. The suburb is about 20 miles northeast of Dallas. Eight people died, 15 were injured and about 600 structures, mostly single-family homes, were damaged.

The weather service said an EF-4 tornado, which is the second-most powerful category with winds up to more than 200 mph, hit the community at about 6:45 p.m. Saturday.

In the nearby town of Rowlett, City Manager Brian Funderburk said on Sunday morning that 23 people were injured, but that there were no deaths and no reports of missing people. The weather service said damage indicated it was likely an EF-3 tornado, which has winds of up to 165 mph.

Dallas County Judge Clay Jenkins said in a statement Sunday night that as many as 600 homes were damaged in Rowlett.

Homes in the neighborhood that had been searched by emergency responders were marked with a black “X.” State troopers blocked off roads, utility crews restored power and people walked around, hushed and dazed.

Three other people died in Collin County, about 45 miles northeast of Dallas, according to sheriff’s deputy Chris Havey, although the circumstances were not immediately clear.

Texas Gov. Greg Abbott made disaster declarations Sunday for four counties — Dallas, Collin, Rockwall and Ellis — and warned that the number of victims could rise.

On the other side of the state, the Department of Public Safety in Amarillo strongly discouraged travel throughout the entire Texas Panhandle — a 26-county area covering nearly 26,000 square miles — because blowing and drifting snow had made the roads impassable. Interstate 40, the main east-west highway across the Panhandle, was almost completely shut down; DPS said only a small section in Amarillo was open.

Oklahoma Gov. Mary Fallin declared a state of emergency as there were blizzard conditions and an ice storm warning out west and flood warnings in the east, where one community had received 9 inches of rain. The state Department of Emergency Management said eight storm-related injuries were reported, and about 60,000 homes and businesses were without power.

In southern Illinois, authorities said three adults and two children drowned Saturday evening when the vehicle they were riding in was swept away and sank in a rain-swollen creek.

Also Sunday, the death toll in the Southeast, linked to severe weather at the end of last week, rose to 19 when Alabama authorities found the body of a 22-year-old man whose vehicle was swept away while attempting to cross a bridge.