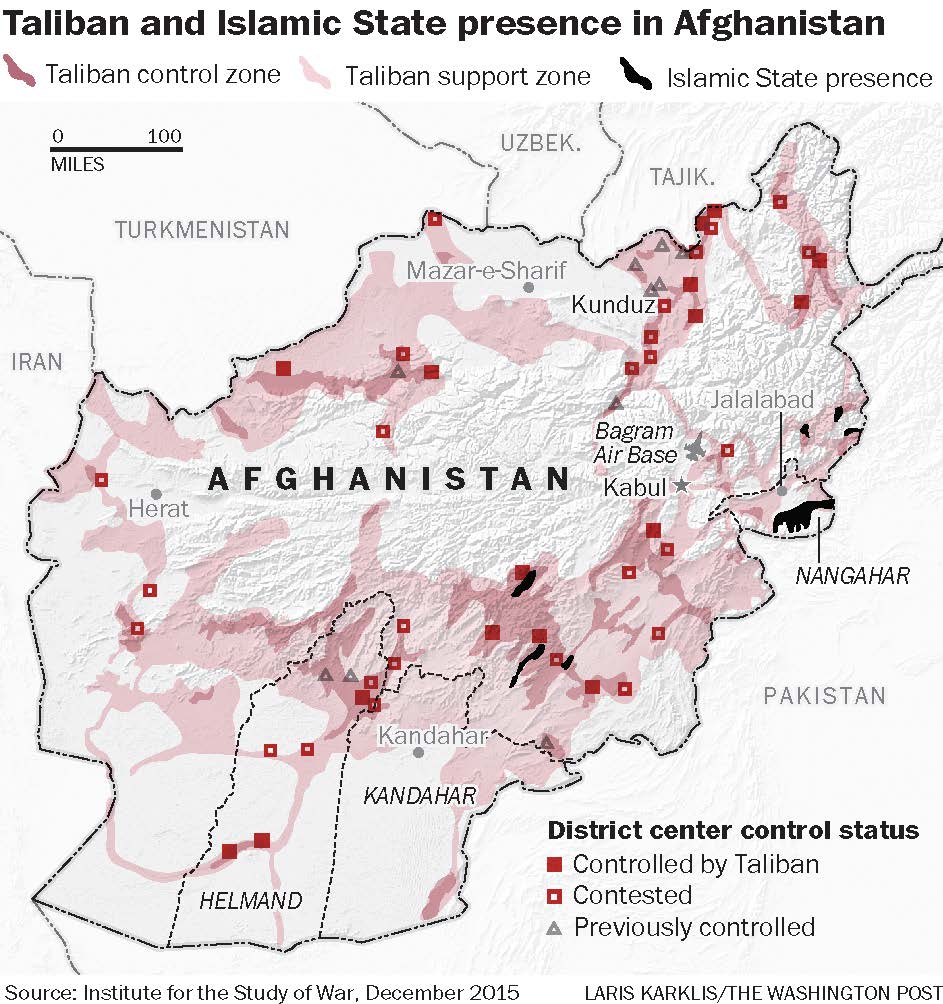 Top Afghan and American officials have privately begun to voice increasingly grim assessments of the resurgent Taliban threat, most notably in a previously undisclosed transcript of a late October meeting of the Afghan National Security Council.

“We have not met the people’s expectations. We haven’t delivered,” Abdullah Abdullah, the country’s chief executive, told the high-level gathering. “Our forces lack discipline. They lack rotation opportunities. We haven’t taken care of our own policemen and soldiers. They continue to absorb enormous casualties.”

With control of – or a significant presence in – roughly 30 percent of districts across the nation, according to Western and Afghan officials, the Taliban now holds more territory than in any year since 2001, when the puritanical Islamists were ousted from power after the 9/11 attacks. For now, the top American and Afghan priority is preventing Helmand, largely secured by U.S. Marines and British forces in 2012, from again falling to the insurgency.

As of last month, about 7,000 members of the Afghan security forces had been killed so far this year, with 12,000 injured, a 26 percent increase over the total number of dead and wounded in all of 2014, said a Western official with access to the most recent NATO statistics. Attrition rates are soaring. Deserters and injured Afghan soldiers say they are fighting a more sophisticated and well-armed insurgency than they have seen in years.

As Afghan security forces struggle, U.S. Special Operations troops are increasingly being deployed into harm’s way to assist their Afghan counterparts. Since Nov. 4th, four members of the U.S.-led coalition have been wounded in Helmand, said U.S. Army Col. Michael Lawhorn, a military spokesman. Officially, U.S. military personnel have a mandate only “to train, advise and assist” their Afghan counterparts.

In the confidential October meeting, Gen. John F. Campbell, the commander of U.S. and allied forces in Afghanistan, told his Afghan counterparts that he was as guilty as they were of “just putting our finger in the dyke in Helmand.”

But he was highly critical of Afghan security officials for “not managing” their forces in a way that ensured they got enough training, and for allowing “breakdowns in discipline” in the ranks. “The Taliban are not 10 feet tall,” he said. “You have much more equipment than they do. You’re better trained. It’s all about leadership and accountability.”

“I will use more of my SOF and enablers to buy you more space and time,” he said, referring to Special Operations forces. A senior U.S. defense official, speaking on condition of anonymity because of military rules, said Campbell’s comments represented “an attempt to encourage the Afghans to take action in Helmand province.”

Helmand was a key focus in a major American offensive launched in 2010, after President Obama dispatched a “surge” of 30,000 troops to Afghanistan. Marja was the first place Marines launched operations, and by the end of the surge, in late 2012, the Taliban had been subdued in much of its southern heartland.

Now, the fresh concerns over Helmand arrive at the end of a year in which the Taliban and other insurgent groups, including the Islamic State, have steadily advanced, particularly in the north. They have taken advantage of the end of the U.S. and NATO combat mission, which has left a military and political vacuum, forcing Obama to extend the U.S. role by keeping at least 5,500 U.S. troops here after he leaves office.

A Pakistani military operation has also flushed hundreds of well-trained foreign fighters into Afghanistan, bolstering the Taliban and the Islamic State.

Meanwhile, the government is grappling with its own problems. The economy is crippled; high unemployment and corruption remain entrenched, breeding public resentment. Political infighting, policy disputes and leadership woes have deepened inside the administration of President Ashraf Ghani, who shares power with Abdullah, the chief executive. The cabinet remains incomplete, with no defense minister, as the security issues become more serious.

The Taliban’s gains have come amid internal divisions and a leadership crisis triggered by the surprise announcement in the summer that its leader, Mohammad Omar, had been dead for more than two years. There is now a contest for power and territory among Taliban factions. But rather than weakening the movement, it has spawned more uncertainty and violence.