General At Least 11 Killed in Texas Storms That Spawned Tornadoes 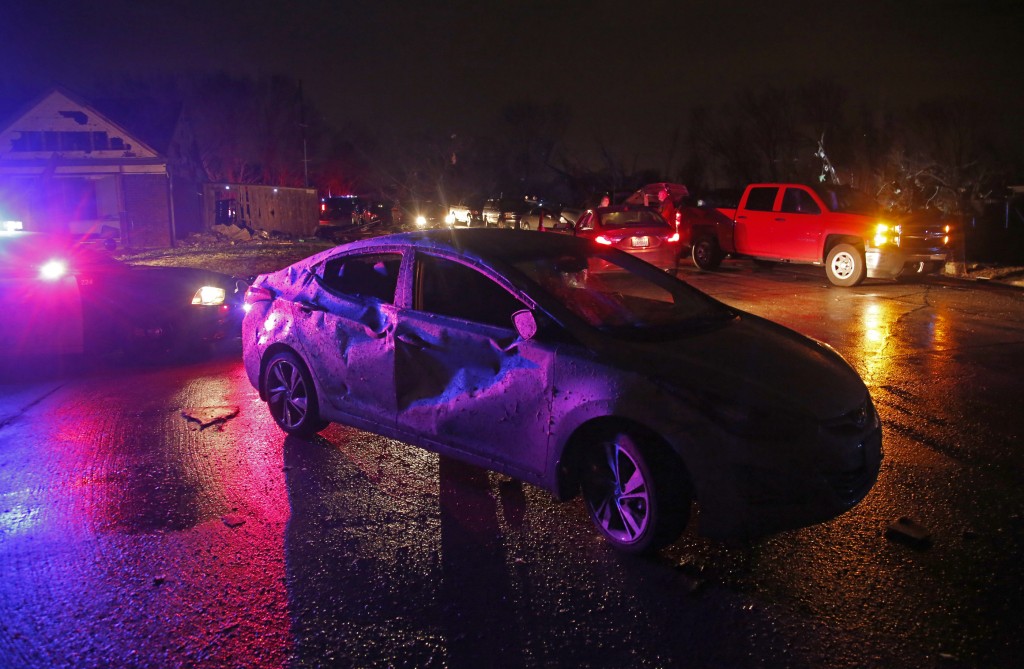 Tornadoes swept through the Dallas area after dark on Saturday, leaving substantial damage and at least eleven dead either from the storm or related traffic accidents, in the latest of a succession of freakish winter weather events across the country.

The Texas tornadoes followed days of tumultuous weather in the Southeast including unusual winter tornadoes that left 18 people dead.

National Weather Service meteorologist Anthony Bain in Fort Worth said several tornadoes touched down in the Dallas area, although the full extent of the damage would not be known until daylight Sunday.

The storms left homes with roofs blown away, vehicles mangled or turned upside down, power lines down, natural gas lines burst, trees toppled and debris strewn across neighborhoods. The damage stretched over about a 40-mile-long area from 20 miles south of Dallas to northeast of the city.

Joe Harn, police spokesman for Garland, about 20 miles northeast of Dallas, said four people were killed in vehicle accidents during the massive storm, but it was unclear if all four were in the same vehicle or how they died.

Three other people died in Collin County, about 45 miles northeast of Dallas, according to Sheriff’s Deputy Chris Havey, although the circumstances were not immediately clear.

In the town of Rowlett near Garland, police spokesman Det. Cruz Hernandez said several people were injured, although the exact number was unknown. Two families were barricaded in their homes, he said.

“As of right now, we are still in the search-and-rescue mode. We still have some homes that have been demolished and not everyone in the homes has been accounted for,” Hernandez said.

Residents were being kept out of part of east Rowlett and heavy equipment was brought in to move debris from homes where people were possibly trapped inside.

The Red Cross said it was setting up shelters for people whose homes were damaged by the storm.

“I think everyone understands now the gravity of what happened,” Anita Foster, spokeswoman for American Red Cross of North Texas, said on WFAA.

The twisters – accompanied by torrential rain, wind and some hail – were part of a weather system that could produce major flooding from north Texas through eastern Oklahoma, eastern Kansas, western Arkansas and parts of Missouri.

Passengers waiting for flights at Love Field, a major Dallas airport, were moved away from windows during the storm. Flights were temporarily halted from Dallas-Fort Worth International Airport.

On the other side of Texas, a snowstorm accompanied by plunging temperatures was expected to leave up to 16 inches of snow in west Texas and much of New Mexico through Sunday evening, according to NWS meteorologist Brendon Rubin-Oster in College Park, Maryland.

“It’s going to be quite dangerous for anyone exposed to these elements,” Rubin-Oster said.

In the Southeast, two more deaths linked to weather were reported Saturday in Mississippi, bringing that state’s death toll from severe weather to 10. Late Saturday, one death was reported in Alabama.

More than 400 homes in total were affected, he said. Severe storms are forecast for Sunday night through Monday as a strong cold front pushes through. Tornadoes are possible, and residents are asked to remain on alert.

The flooding is the result of heavy downpours that have thrashed the southeastern U.S. since Wednesday, bringing record rainfalls in some areas. Four inches of rain walloped the city of Mobile, Alabama, on Wednesday – smashing the previous record of 2.2 inches set in 1990.

Six people were killed in Tennessee, including three who were found in a car submerged in a creek, according to the Columbia Police Department. The Tennessee Emergency Management Agency said Saturday that authorities were monitoring areas for possible flooding.

One person died in Arkansas, and dozens of homes were damaged or destroyed.

Better weather was forecast for the East. Temperatures in the eastern third of the country could set numerous record highs Sunday, Rubin-Oster said. Washington, D.C., could see a record daily temperature of 73 degrees, New York City, 65 – which would break a record of more than 50 years – and Orlando, Florida, could tie a record of 86 degrees set in 1921.