U.S. Stocks Drift to a Mixed Close in Quiet Day 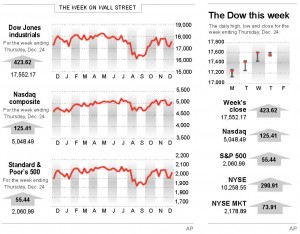 Stocks closed slightly lower in extremely light trading Thursday as investors remained on the sidelines ahead of the year-end holidays. The price of crude oil continued to recover.

Dec 24 is almost always the quietest trading day of the year, and this year was no exception. Roughly 1.4 billion shares changed hands on the New York Stock Exchange, a third of what’s typical and the lowest volume for this day since 2013.

While stocks were slightly lower Thursday, U.S. markets had a solid week. The S&P 500 rose nearly 3 percent and is back into positive territory for the year, albeit barely. It is not uncommon for stocks to rally into the end of the year, as investors close their books and reposition themselves for the next year.

Oil prices continued to recover from lows earlier in the week. U.S. crude futures gained 60 cents to close at $38.10 a barrel on the New York Mercantile Exchange. Brent crude, which is used to price international oils, rose 53 cents to close at $37.89 a barrel in London.