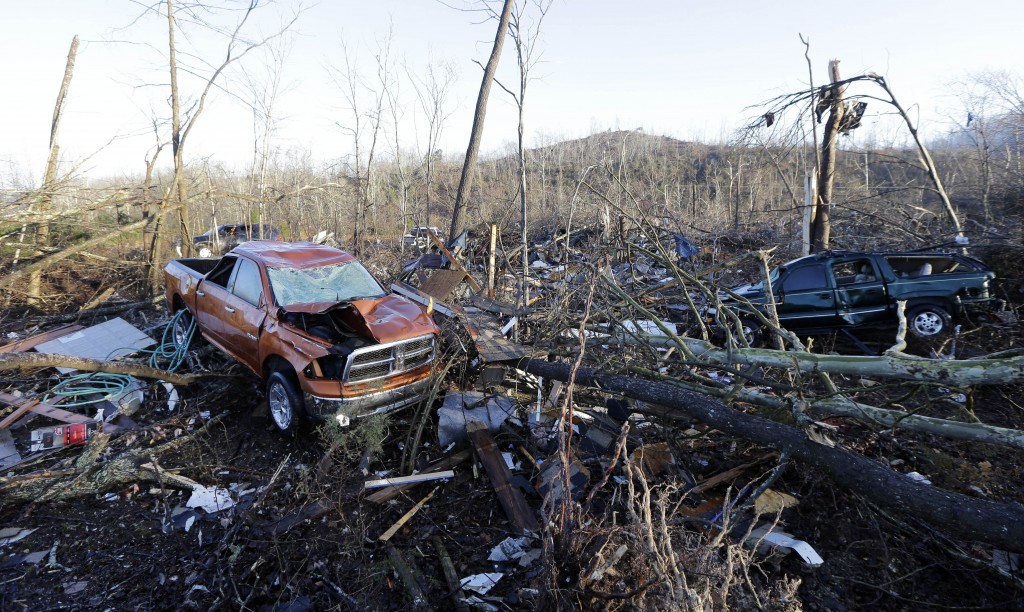 At least 10 people were killed in Mississippi, Tennessee and Arkansas as spring-like storms mixed with unseasonably warm weather and spawned rare late-December tornadoes in the South. Emergency officials blamed the severe weather for injuring scores of others Wednesday and destroying dozens of cars, homes and businesses.

The threat of tornadoes eased as the line of storms moved east Thursday and brought heavy rain and thunderstorms to Atlanta and the Carolinas.

From Alabama to New York, much of the country felt unusually warm temperatures in the 70s, and thousands were without power from Mississippi to Michigan.

The storms killed at least six in Mississippi, including a 7-year-old boy in Holly Springs who died when the storm picked up and tossed the car he was in, officials said. Three were killed in Tennessee and one in Arkansas.

Mississippi Emergency Management Agency spokesman Greg Flynn said the state had at least 40 injuries, some serious. He said early information suggested a large tornado that touched down near Clarksdale traveled more than 100 miles in a line toward Tennessee.

Mulester Johnson was with relatives when a fierce storm roared through Holly Springs and tore the back of his house from its foundation, tossed trees onto pickup trucks and leveled brick walls.

On Wednesday night, he opened the door to what had been a bedroom and looked past his disheveled belongings to clusters of broken trees in the backyard. The room’s walls had been blown away.

“This right here is a mess, but I can’t complain because we’re blessed,” he said.

Luckily, no one was injured.

Along Mississippi Highway 7 close to Johnson’s house, headlights from passing cars illuminated downed tree limbs, slabs of plasterboard and wooden beams that had been turned into projectiles.

Pieces of metal tangled in drooping power lines, dangling precariously alongside the road. The smell of freshly overturned dirt and trees lingered in the air as emergency crews tended to downed lines.

Sean Wagner, an amateur storm chaser, shot video of a tornado in Holly Springs and said he had to warn two families that had stopped under an overpass.

“I got out of my car and told the families they weren’t safe, I showed them my radar, it showed that they were close to the path if the tornado. I told them to leave because if I was there as a storm chaser, it wasn’t safe,” he said.

In Benton County, Mississippi, where at least four deaths occurred and people were missing, crews searched house-by-house to make sure residents were accounted for.

The threat of severe weather at this time of year is unusual but not unprecedented, said Greg Carbin, a meteorologist at the national Storm Prediction Center. Exactly a year ago, twisters hit southeast Mississippi, killing five people and injuring dozens of others.