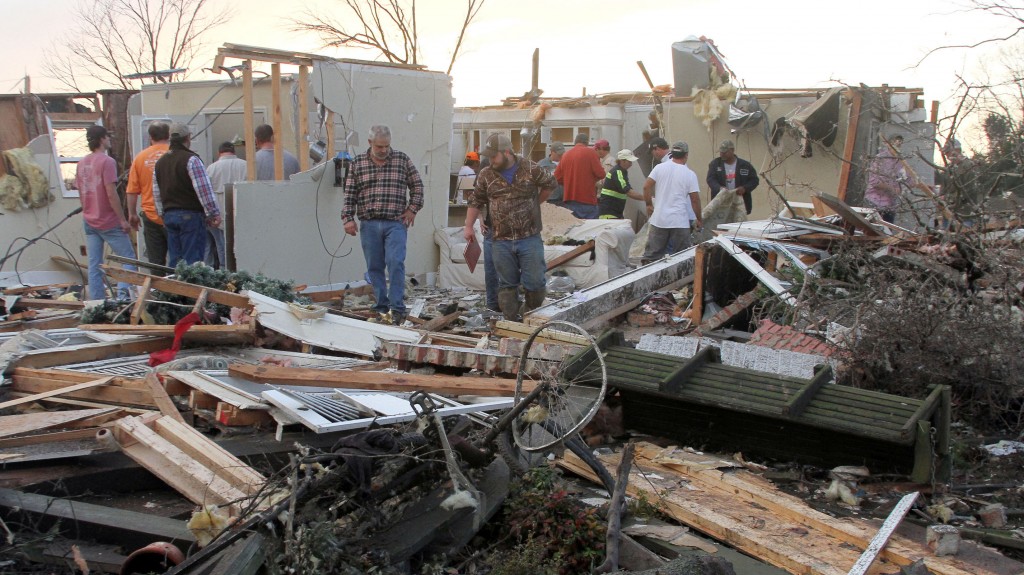 In northern Mississippi, residents were beginning to take stock after fierce storms that killed at least seven across the country whipped through the area.

The deadly spring-like storms killed three in Mississippi, three others in Tennessee and one in Arkansas before the worst passed Wednesday night.

Mulester Johnson, 67, said he and relatives were inside his house in Holly Springs, Mississippi, when the storm hit. The wind tore the back of his house from its foundation and multiple sheds were missing afterward, he said. Trees rested atop several trucks on his property, and slabs of brick walls were strewn throughout his yard after the storm.

Johnson opened the door to what had been a bedroom and looked past his disheveled belongings to clusters of broken trees in the backyard. The room’s walls had been blown away.

“This right here is a mess, but I can’t complain because we’re blessed,” he said. Johnson planned on staying with relatives Wednesday night and said no one inside the house was injured.

A 7-year-old boy died in Holly Springs when the storm picked up and tossed the car he was riding in, officials said.

A tornado damaged or destroyed at least 20 homes in Clarksdale, Mississippi. Planes at a small airport overturned and an unknown number of people were injured.

Media images showed that the tornado appeared to be on the ground for more than 10 minutes. Interstate 55 was closed in both directions as the tornado approached, the Mississippi Highway Patrol said.

Along Mississippi Highway 7 close to Johnson’s house, headlights from passing cars illuminated downed tree limbs, slabs of plasterboard and wooden beams that had been turned into projectiles by the tornado.

Pieces of metal tangled in drooping power lines, dangling precariously alongside the road. The smell of freshly overturned dirt and trees lingered in the air as emergency crews tended to downed lines.

In Benton County, Mississippi, where at least two deaths occurred and at least two people were missing, crews were searching house-by-house to make sure residents were accounted for.

In Arkansas, Pope County Sheriff Shane Jones said 18-year-old Michaela Remus was killed when a tree crashed into her bedroom. The girl and her one-and-a-half-year-old sister were sleeping in a bedroom of the house near Atkins, about 65 miles northwest of Little Rock, when winds uprooted the tree that crashed through the roof. Rescuers pulled the toddler safely from the home.

In parts of Georgia, including Atlanta, a flood watch was posted through Friday evening as more than 4 inches of floodwater was expected, the National Weather Service said.

The threat of severe weather at this time of year is unusual, but not unprecedented, said Greg Carbin, a meteorologist at the national Storm Prediction Center.

Once the strong storms clear out, warm temperatures were expected. Highs in the mid-70s in Atlanta and Charlotte, North Carolina, over the weekend were forecast.