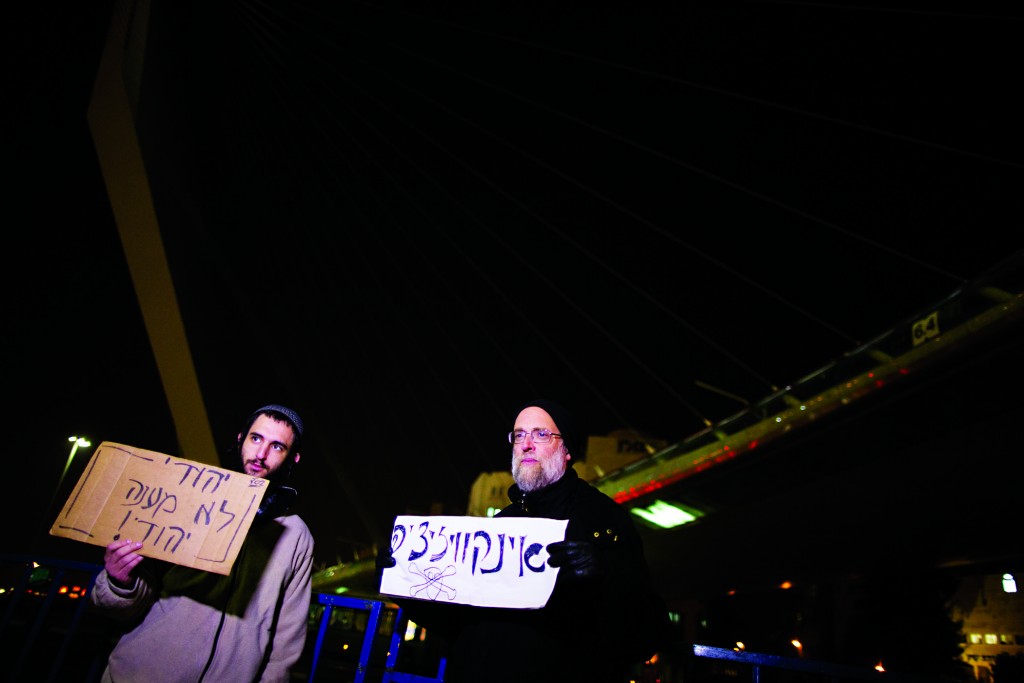 Eighteen protesters arrested during Sunday’s demonstration on a major road in northern Israel, were released Wednesday morning. The protesters were demanding the closure of ‘The Jewish Department,’ the Shin Bet unit that specializes in questioning suspects in cases of so-called ‘price tag’ attacks, in which Jews allegedly attack Arabs. The detainees were arrested after they closed down the Yoqne’am junction in northern Israel. Police cleared the intersection after a few minutes using anti-riot measures.

The protest was organized due to the ongoing detention of several suspects in the Duma arson case, in which two houses in the Arab village went up in flames after being firebombed by masked attackers. The Shin Bet believes those attackers were Jews. In one of the houses, an 18-month-old baby burnt to death, and both his parents eventually succumbed to their wounds. Since then, the Shin Bet has been looking for suspects in the case, concentrating on its theory that the arson was carried out by Jewish radicals, although no evidence for this has yet been presented.

At least one detainee arrested several weeks ago in connection with the arson, has confessed to being involved in the crime – but according to his attorney, right-wing activist Itamar Ben-Gvir, that confession is inadmissible, because it was obtained under duress. “I have met many people in prison over the years, but the vision I saw when I met with my client after 21 days in custody was shocking,” Ben-Gvir said Tuesday. “He was broken physically and spiritually, and he needs mental help. The Shin Bet interrogators indeed ‘broke’ him, in all understandings of the term.”

In a statement, the Shin Bet said that it had detained “the main suspects” in the case as “a matter of national security. They claim that “The investigation is proceeding in accordance with Israeli law, and is under the supervision of the Attorney General and the relevant courts.”

On Tuesday, Prime Minister Binyamin Netanyahu decried what he called the “dangerous denigration” of the Shin Bet, which he said “works day and night to protect Israelis.” Despite that, pressure is mounting for some change in the way the Shin Bet treats Jewish suspects in price tag cases, not in order to excuse terrorist behavior – but because the evidence in the vast majority of the cases has been extremely flimsy, if it exists at all. Several MKs accused the Shin Bet of using the Jewish Department in order to score points with the media, acting as a “counterweight” to the organization’s arrest and often rough questioning of Arab terror suspects.

Agriculture Minister Uri Ariel (Jewish Home) called for an immediate closure of the Department, as did MK Betzalel Smotrich (Jewish Home), who said: “The price tag attacks are horrible, but no one can tell me that because of 60 lunatics the security of the state is in danger and requires an entire security apparatus to deal with it, as the Shin Bet claims.”