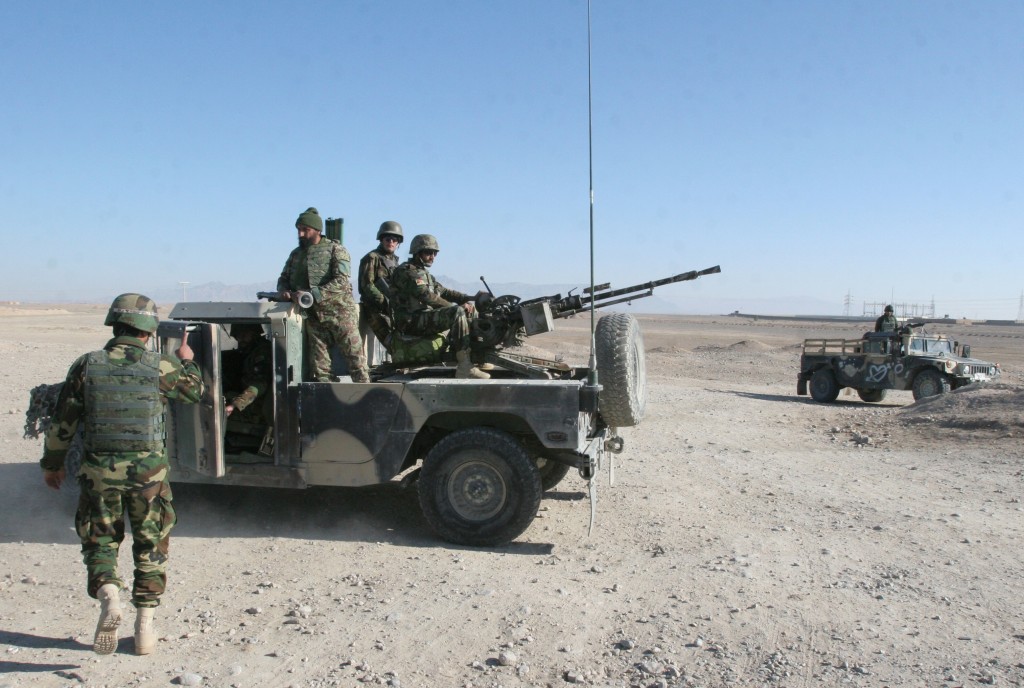 The Afghan military has rushed reinforcements to a southern district threatened for days with takeover by the Taliban, the country’s defense minister said Wednesday as he appealed for stepped-up NATO assistance and military support.

In a besieged army base in the embattled district of Sangin, an Afghan soldier described a dire situation, saying a handful of Afghan troops inside were fighting to the last, trying to keep the Taliban out.

Meanwhile, at an air base outside of Kabul, U.S. troops saluted fallen comrades during a memorial ceremony Wednesday for six American soldiers killed in a Taliban attack this week.

The six died when a suicide bomber drove his explosives-laden motorcycle into a joint NATO-Afghan patrol near the Bagram Air Field on Monday. Two U.S. troops and an Afghan were also wounded in that attack – the deadliest day for American troops in Afghanistan since May 2013.

As fighting in the Sangin district of southern Helmand province continued Wednesday, Afghan army and police arrived to help security forces pinned down for days in the besieged area, said the minister, Masoom Stanekzai.

Sangin is an important district in Helmand, as it borders Pakistan and sits on transport routes for illegal substances, arms and other lucrative contraband.

The Taliban, whose intensified war against Afghan forces has not slowed down with the colder season, have been besieging it for days and have nearly completely run over the district.

“The Helmand battle is not easy because the province has a long border …and our enemies are well-equipped and deeply involved in the smuggling of (illegal substances),” he said. “These factors complicate the battle for Sangin.”

By mid-afternoon Wednesday, the Taliban spokesman for southern Afghanistan, Qari Yousaf Ahmadi, tweeted that “Sangin district has completely collapsed to the Taliban” and that insurgents have captured Afghan soldiers and ammunition.

The insurgents are prone to exaggerating its battlefield successes, and Kabul officials denied that Sangin had fallen.

However, Helmand’s deputy governor Mohammad Jan Rasulyar said all lines of communication with Sangin had been cut and there was no immediate information available on the situation there.

“We already said that our forces are weak and need backup but because we have no communication with our forces, we don’t know whether the Taliban have captured Sangin or not,” Rasulyar added.

An Afghan army soldier, Yaseen Zamarai, reached by The Associated Press over the phone inside the besieged base in Sangin said the Taliban were outside the building and had been pushed back after entering once earlier in the day.

“We need help, we can’t hold them for much longer,” Zamarai said, his voice cracking. “It’s not that we are afraid of death, but we didn’t think that our brothers would leave us like this.”

Britain has sent a small contingent of soldiers to Helmand as advisers under the new NATO mandate to train the Afghan forces. The return of British troops is poignant, as they suffered more than 100 of their 456 fatalities during Britain’s 13-year Afghanistan combat mission in Sangin.

Afghanistan’s security forces have been taking on the Taliban alone, following the end of the international combat mission last year. The U.S. and NATO have around 13,000 troops in the country, most of them operating under the training mandate.

Districts across Helmand have been threatened by the Taliban in recent months. The fight for Sangin has been particularly ferocious, with officials saying that only the army base was still in government hands until Tuesday.

Supply lines were cut, preventing ammunition and food from reaching government forces, and roads around the district center mined, officials have said.

Stanekzai said that with the arrival of new troops to the area, the battle would be reinvigorated and “this should help cut the number of casualties, and provide much-needed logistical support.”

The Taliban have fought hard across the country this year, stretching Afghan forces as they have taken hold of some districts, if only for a few hours or, in the case of the northern city of Kunduz, three days that sent waves of concern through Afghans who had believed the insurgency was not strong enough to take major urban centers.