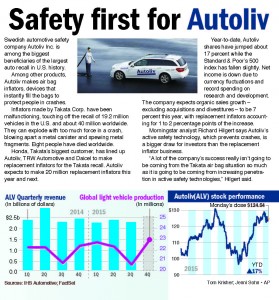 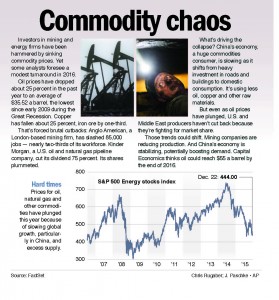 Wall Street climbed on Tuesday, buoyed by energy shares as sliding oil prices stabilized and by fairly healthy data on U.S. economic growth, while the dollar fell for a third consecutive session.

Wall Street has been closely correlated with energy prices in recent weeks as crude has extended a 1-1/2-year slide this month and plumbed fresh multi-year lows.

U.S. crude prices settled up 0.9 percent to $36.14 a barrel, as traders squared positions ahead of a traditional year-end period of low liquidity. Brent fell 0.4 percent to $36.20 a barrel, after trading higher earlier in the session. Between the two crude prices, “there is some stability here,” said Michael Holland, chairman of Holland & Co in New York.

At this time of year, “so few people are involved in the marketplace that any single thing can have an outsized reaction in the market,” Holland said. “The fact that oil is up is a major piece of the puzzle here.”

The S&P energy sector index rose 1.2 percent, as did the materials and industrials groups.

Noting that those three sectors are among those “that have been blasted the most” this year, Mark Luschini, chief investment strategist at Janney Montgomery Scott in Philadelphia, said the stock rally “could be simply an oversold bounce.”

U.S. home resales posted their sharpest drop in five years in November, according to the National Association of Realtors, in a potential warning sign for the U.S. economy.

A separate report from the Commerce Department showed the country’s gross domestic product grew at a 2.0 percent annual pace in the third-quarter, a fairly healthy clip, supported by strong consumer and business spending.

The U.S. economic growth and inflation data reinforced the view that the Federal Reserve would proceed with a steady pace of interest rate increases next year, which sent shorter-dated Treasury yields modestly higher.

The dollar index, which tracks the greenback against a basket of currencies, fell 0.2 percent, as more traders booked profits on bullish bets following the Fed’s interest rate increase last week. The euro rose 0.4 percent against the dollar.

“As soon as Fed’s rate hike was out of the way, we saw a lot of investors getting out of their long dollar positions,” said Sireen Harajli at Mizuho Corporate Bank in New York.

Copper fell 1.5 percent as traders were reluctant to push the metal above Monday’s five-week peak given slowing economic growth in China.