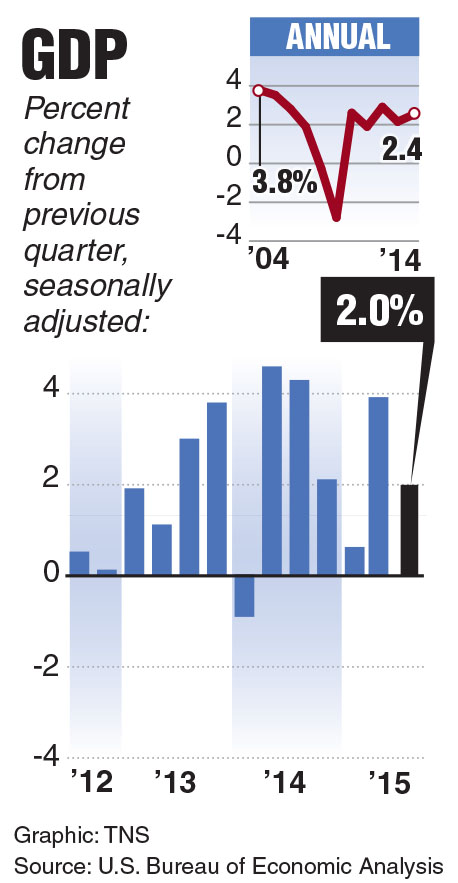 The U.S. economy grew at a fairly healthy clip in the third quarter as strong consumer and business spending offset efforts by businesses to reduce an inventory glut, underscoring its resilience despite a raft of headwinds.

Gross domestic product (GDP) grew at a 2.0% annual pace, instead of the 2.1% rate reported last month, the Commerce Department said in its third estimate on Tuesday.

While that was a sharp deceleration from the brisk 3.9% pace logged in the April-June period, growth remained around the economy’s long-run potential.

The Federal Reserve last week raised its benchmark overnight interest rate by 25 basis points to between 0.25% and 0.50%, the first increase in nearly a decade. The rate hike was a vote of confidence in the economy, which has been buffeted by slower global demand, a strong dollar and spending cuts in the energy sector.

Economists polled by Reuters had forecast third-quarter GDP growth revised down to a 1.9% rate. When measured from the income side, the economy grew at a 2.7% pace, not the 3.1% clip reported last month, to account for downward revisions to corporate profits.

A record increase in inventories in the first half of the years left warehouses bulging with unsold merchandise and businesses with little appetite to restock.

Despite efforts to whittle down the stockpiles of unsold goods, inventories remain relatively high and will probably be a drag on growth in the fourth quarter. Estimates for fourth-quarter growth are currently around a 2% rate.

Consumer spending, which accounts for more than two-thirds of U.S. economic activity, grew at a 3.0% rate in the third quarter as previously estimated. A downward revision to spending on services was offset by a small upward adjustment to goods outlays.

Spending is being supported by a strengthening labor market and rising home values. Savings, which are near three-year highs, and low inflation are also helping to underpin consumption.

Growth in business spending on equipment was raised to a 9.9 percent rate from a 9.5 percent pace. Growth in exports, which have been hurt by the strong dollar and sluggish global demand, were revised to show a slower 0.7% rate of increase.

With imports advancing at a slightly faster pace than reported last month, that left a trade deficit that subtracted a bigger 0.26 percentage point from GDP growth.

A measure of private domestic demand, which excludes trade, inventories and government spending, was revised up one-tenth of a percentage point to a 3.2% pace.

There were modest downward revisions to investment in nonresidential structures, to account for ongoing investment cuts by energy firms following a collapse in oil prices.

The Commerce Department also reported that corporate profits after tax fell at a 1.7% rate in the third quarter, not at a 1.6% rate as was previously believed. Profits, which have been undercut by the dollar’s strength and lower oil prices, were down 8.2% from a year ago.

That compared to the previously estimated 8.1% drop and was the biggest drop since the fourth quarter of 2008.