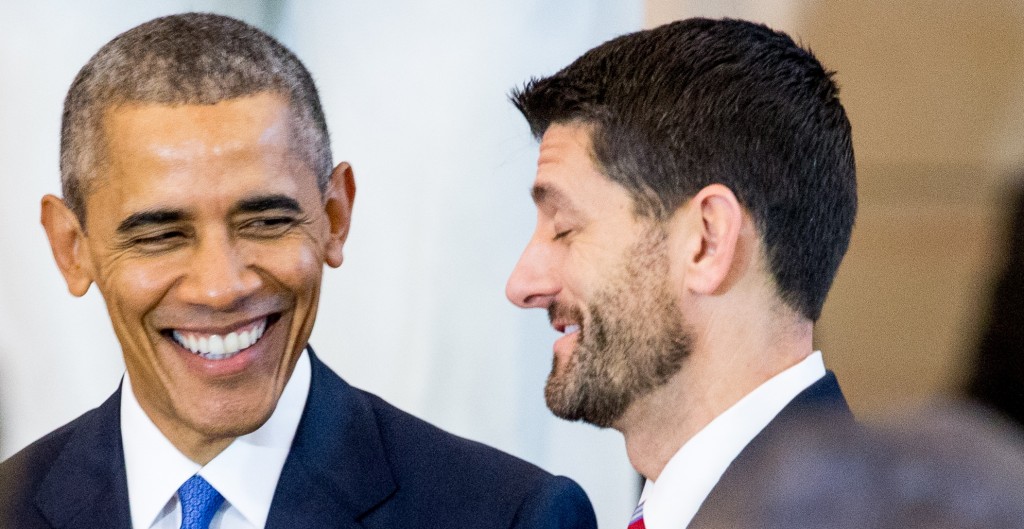 Five days after Paul Ryan was sworn in as House speaker, the White House promised to invite him to meet President Barack Obama for a perfunctory but traditional photo opportunity. It would be a chance for the leaders to shake hands for the cameras and exchange pledges to work together.

Ryan never got that invitation.

It turns out the White House didn’t want a photo marking the advent of a new Republican speaker. And despite the new leadership, neither side was eager to signal a reset in relations. Instead, both Republican and White House officials say they picked up this fall where Obama and former House Speaker John Boehner left off.

As Ryan himself put it, the House has an agenda and “it doesn’t require the president.”

The mutual lack of interest has taken hold with little drama.

Seeing scant reason to dig in and fight, congressional leaders and the White House reached an agreement on a massive year-end tax and spending package last week, without shutting down the government. The deal represented something once commonplace in Washington: a compromise, with elements for all sides to like and dislike.

But no one is talking about the dawn of a new era of cooperation.

“Kudos to him,” Obama said of Ryan’s work in “actually” passing a budget the way Congress used to. In his year-end press conference, the president said he had “some optimism” on “a narrow set of issues.”

After years of battling an unruly opposition, Obama long ago let go of the notion that he could find a secret to working with Congress. As “charm offensives,” dinners, and golf with Boehner yielded little, the White House relied on executive actions and negotiations with foreign leaders to advance its agenda. With just a year left in office, Obama has pared down his legislative expectations to two major pieces of business – final approval of the massive Pacific Rim free trade deal and a criminal justice reform bill.

Republicans complain of a president eager to thwart Congress’ prerogatives, but his allies on Capitol Hill endorse the strategy.

“He’s tried, and thank goodness he came to the realization that the crazy Republicans won’t help him on anything,” Senate Minority Leader Harry Reid told The Associated Press.

From the perspective of Hill lawmakers – Republicans, and some Democrats – their interests are only drifting further away from a lame-duck president.

Ryan and Senate Majority Leader Mitch McConnell see few areas of potential overlap. McConnell has sent mixed signals on criminal justice reform and poured cold water on the prospect for a major Asia trade bill. His goal for 2016 is to get the annual appropriations process back on track and promoting and protecting vulnerable Senate Republicans.

“The president’s a smart, capable guy but he’s very, very liberal,” McConnell told The AP. “So you’re left – when you have a president who’s this liberal – with a smaller set of things that you can agree to do.”

Ryan says he wants to put together a “bold” GOP agenda that shows what the party stands for and offers an alternative to Democrats in a campaign year.

That does not include passing legislation intended to win Obama’s signature.

“We owe the country a fresh approach, a new plan, and that’s what we’re going to do,” Ryan said. “And so no, it doesn’t require the president.”

There was reason to believe the Ryan era might have ushered in warmer relations. White House officials consider the new speaker an earnest negotiator and have voiced respect for his interest in policy. He was recruited by his party to be a unifier between the conservative and moderate factions in the House, and has shown success wrangling his members.

But the White House hasn’t changed its approach to Congress very much to account for the new leadership.

“The question should be less about the relationship between two people and the public perception around that, and more about what is possible with the current makeup of the Republican caucus,” White House communication director Jennifer Psaki said.

Obama doesn’t see a point in wooing lawmakers, especially because his public advocacy can serve to repel Republican support. That partly explains Ryan’s delayed invitation for the photo opportunity, said an official familiar with the president’s strategy.

Sometimes the best thing the president can do is get out of the way, said the official, who wasn’t authorized to speak publicly and demanded anonymity.

The speaker also isn’t focused on White House invitations, Ryan spokesman Brendan Buck said. The leaders have talked by telephone a handful of times. Ryan attended a White House reception for lawmakers. They chatted at a ceremony on Capitol Hill.

No date was set, however.