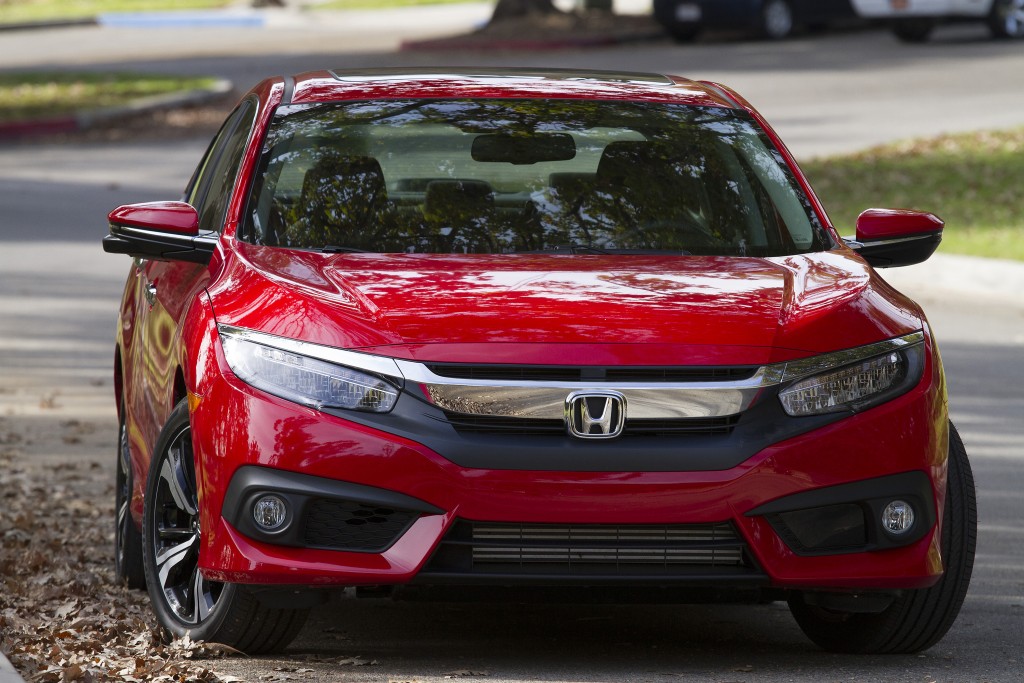 Value-packed and fun to drive, the 2016 Honda Civic EX-L (I give it four out of four stars) compact sedan is a welcome return to form by one of America’s favorite automakers.

After traditionally targeting Japanese competitors like the Toyota Corolla and Nissan Sentra when it developed new Civics, Honda raised its sights to European compacts like the Audi A3. As a result, the 2016 Civic’s fuel economy, room, looks, value and handling rank among the best in any mass-market compact on the road.

Some of the car’s controls and features don’t live up to that standard, but the Civic sets a high bar for upcoming compacts like the new Chevrolet Cruze and Hyundai Elantra that go on sale early in 2016.

Prices for the 2016 Civic start at $18,640 for a model with a 158-horsepower 2.0-liter four-cylinder engine and six-speed manual transmission. Selecting a continuously variable automatic transmission raises the base price to $19,440. The top engine is a turbocharged 1.5-liter that produces 174 horsepower and 162 pound-feet of torque and is only available with the CVT. Prices start at $22,200. Honda expects to sell roughly equal numbers of the two engines.

The only Civic model on sale now is a five-seat sedan. Two-door, hatchback and performance models will follow over the next year or so.

Prices for the new Cruze and Elantra aren’t available, but the Civic I tested compared favorably with the others.

The 1.5-liter engine’s power is in the middle of the pack, but the CVT works smoothly to deliver acceptable acceleration around town and on the highway. The transmission is quiet and unobtrusive.

The key combined figure beats the Dart, Focus, Forte, Sentra, Corolla and Jetta. The EPA hasn’t rated the new Cruze and Elantra yet. Both are likely to be competitive with the Civic, but neither looks likely to top 35 mpg combined.

The last couple of Civics were bland to look at and drive. The 2016 changes that. The steering is fast and responsive, delivering good feedback. The car is steady and stable in enthusiastic driving. The body remains stable and composed in quick curves, a return to the exhilarating handling that distinguished the best previous Civics.

Honda’s first application of Apple CarPlay worked well in my car, providing easy access to contacts, music web searches and navigation. Unfortunately, Honda does not provide a good place to put your smartphones. The USB and 12-volt connections are inconveniently located in a small tray located below the dash. Another little tray in front of the shifter is nearly equally inconvenient. Both are poor places to put phones that most drivers will connect and disconnect just about every time they enter and exit the Civic.

The audio and climate controls are equally inconvenient. There are no dials for volume, tuning or fan speed. Flat panel volume and tuning controls have been a bad idea in every car that’s used them. The Civic doesn’t change that. The fan can only be controlled from the slow-responding touch screen.

The Civic has a distracting and ineffective video display rather than the radar-based blind spot and cross traffic alerts other automakers offer.

As annoying — and frankly baffling in a car otherwise so well thought out and executed — as those faults are, the 2016 Civic’s virtues outweigh them. It’s a leading compact and a finalist for car of the year.