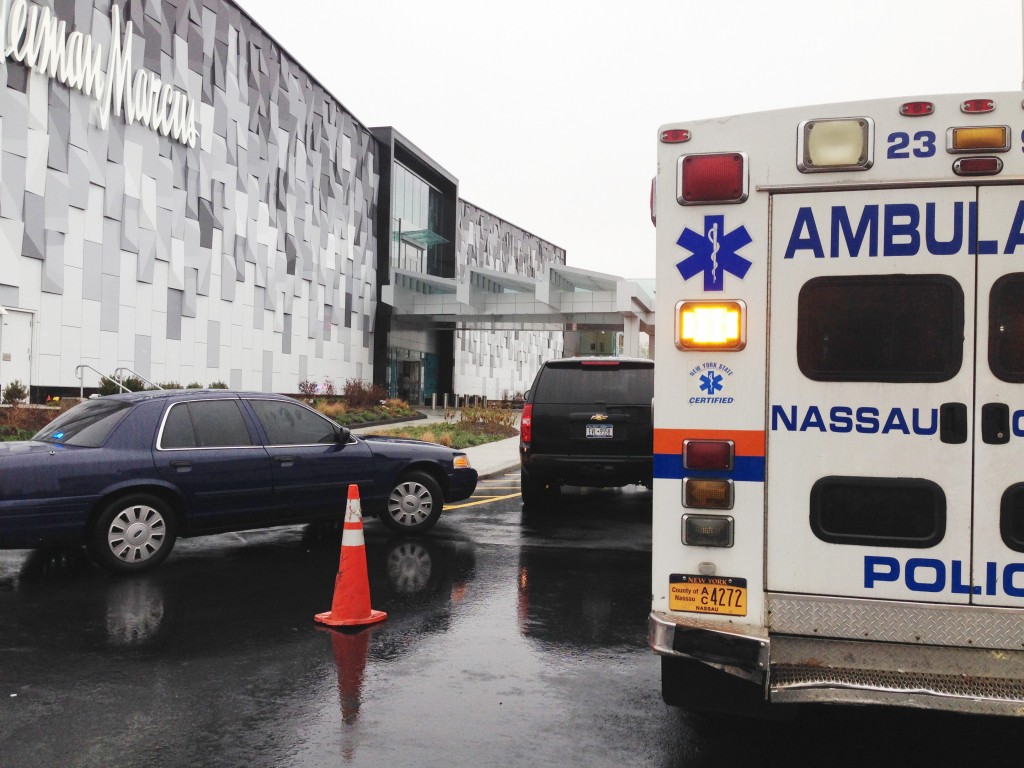 Pandemonium erupted Tuesday at a Long Island mall filled with shoppers when an attempted robbery led to gunfire, sending crowds of people running and screaming and leaving a mall employee in serious condition with a gunshot wound, authorities said. A suspect was in custody.

Acting Nassau County Police Commissioner Thomas Krumpter said the suspect entered the Rolex section of a Tourneau jewelry store at the Roosevelt Field Mall at about 1 p.m. A struggle with store security ensued, and a gun went off. Police said it was “highly likely” the gun belonged to the suspect.

The single shot went into the main concourse area of the mall, hitting a 67-year-old employee, who was taken to the hospital. He was described as having a shoulder wound.

The shooting occurred on a busy afternoon during the year-end shopping season, with the nation still jittery about mass shootings following massacres in San Bernardino, California, and Paris, France.

Jessica Julig, of Queens, told The Associated Press that she was shopping when employees suddenly told her to stay down and move to the back of the store.

“I was shaking,” she said. “People were screaming and then I started to feel the whole mall shake.”

She said she looked out and “saw people running everywhere.”

Julig said shoppers weren’t told what had happened but were told to take cover and then evacuate.

“They took us to the back and then out a service entrance,” she said.

Outside, she said, she saw people screaming and crying.

“I’m terrified,” Julig said. “I just can’t stop shaking. … There were so many little kids in there. Everything was fine. We had been shopping all morning.”

Although police said the mall was never officially evacuated, hundreds fled in the minutes after the shooting, clogging nearby access roads for several hours.

A police spokesman said there were no reports of injuries among those who fled.

An off-duty New York Police Department inspector who was shopping at the mall assisted with the arrest of the robbery suspect, who was not immediately identified by police.

“I did nothing heroic,” Inspector Kenneth Lehr told the Daily News. “I just happened to be at the scene. I was just there for support.”

Shopper Katie Brewer told News 12 Long Island that people were terrified and there was confusion over whether there was a shooter in the mall. She said she was shaken up and planned to get home as soon as she could.

Cellphone video obtained by WNBC showed chairs in the food court overturned and food strewn on the floor.

“Why do I need to risk my life to be in the mall?” Brewer said. “I might as well shop online.”

The mall, located about 25 miles east of Manhattan, has approximately 270 stores.

“Roosevelt Field has been deemed safe by Nassau County Police Department for shoppers and employees and remains open to the public, with the exception of the area near the crime scene,” a statement from Simon/Roosevelt Field Management said about four hours after the shooting.