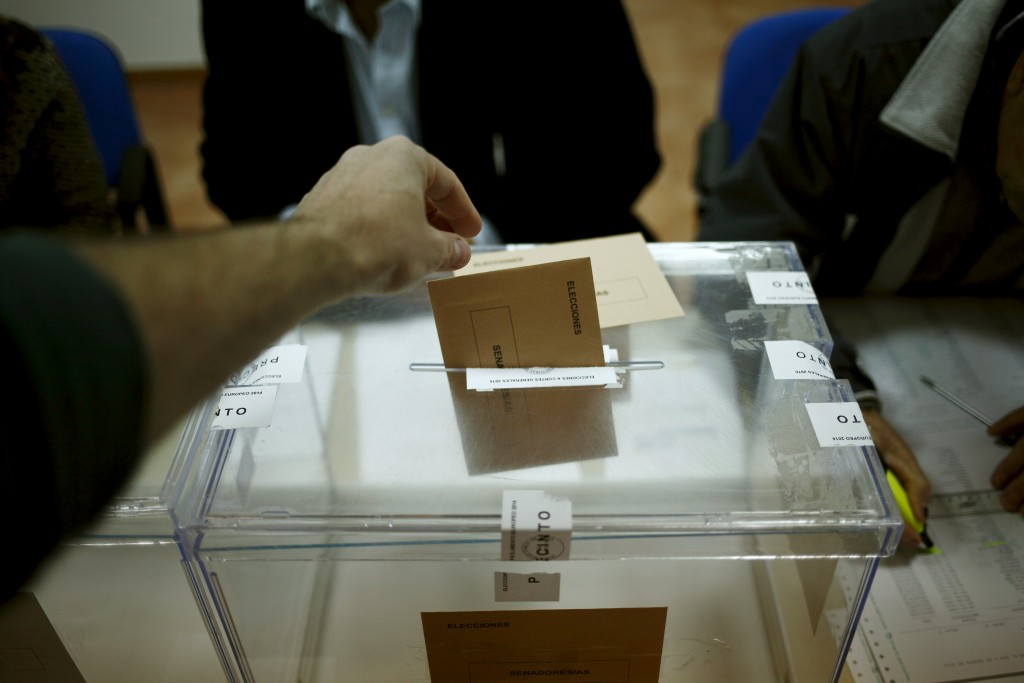 Spaniards voted on Sunday in a parliamentary election in which newcomer parties are expected to make big gains against the once-dominant Conservatives and Socialists, ushering in a new and potentially volatile era of compromise politics.

With many people saying they want to shake up a political system they consider corrupt and unable to resolve Spain’s economic woes, the outcome is the most uncertain in decades.

About one in three of the 36.5 million eligible voters said they would decide whom to support only at the very last minute.

“I would like things to change and for no party to get a majority so none of them will be able to do whatever they want without listening to others,” said Agustin Aduriz, a 30-year-old engineer who voted in the Tribunal neighborhood in Madrid.

Aduriz said he had voted for upstart anti-austerity party Podemos, though he added he had voted in the past for other parties, on both the left and the right.

“My main hope is for Spain to end up with four main parties instead of two. That would be a good outcome.”

Since the end of Francisco Franco’s fascist dictatorship and the return to democracy in the 1970s, Spain has always enjoyed stable parliamentary majorities at the national level, with the center-right People’s Party and the center-left Socialist Party alternating in power.

But a more splintered political landscape could now complicate efforts to form a government.

The Socialists are expected to come in second, while anti-austerity party Podemos (“We Can”) and a second significant newcomer, the liberal Ciudadanos (“Citizens”), are vying for third place, which would make them kingmakers in post-election talks.

Rajoy said on Wednesday he would consider a cross-party pact to ensure a stable administration over the scheduled four-year term, but all the other main parties have come out against joining the PP in a coalition.

That points to a stalemate that analysts agree would probably disrupt an economic reform program that has helped pull Spain – the fifth-largest economy in the 28-nation EU – out of recession and dented a still sky-high unemployment rate.

Ciudadanos and Podemos insiders say both parties are looking beyond Sunday’s vote and aim to keep poaching voters from the PP and the Socialists, giving them no incentive to agree on a pact unless they win major concessions.

The Spanish constitution does not set a specific deadline to form a government after the election. Analysts say negotiations to win enough parliamentary support for a new prime minister to be picked could last many weeks – and maybe even trigger another election.

While Rajoy’s government has already passed the 2016 budget and a combination of low interest rates and cheap oil should help underpin economic growth, soothing any market concerns over political instability, prolonged deadlock in Madrid could be used by pro-independence Catalan parties to press their cause.

The Catalan issue is expected to quickly move back up to the top of the national political agenda as separatist parties have to decide on a joint government no later than Jan. 9. If they fail to agree, new elections would have to be held in Catalonia within two months.