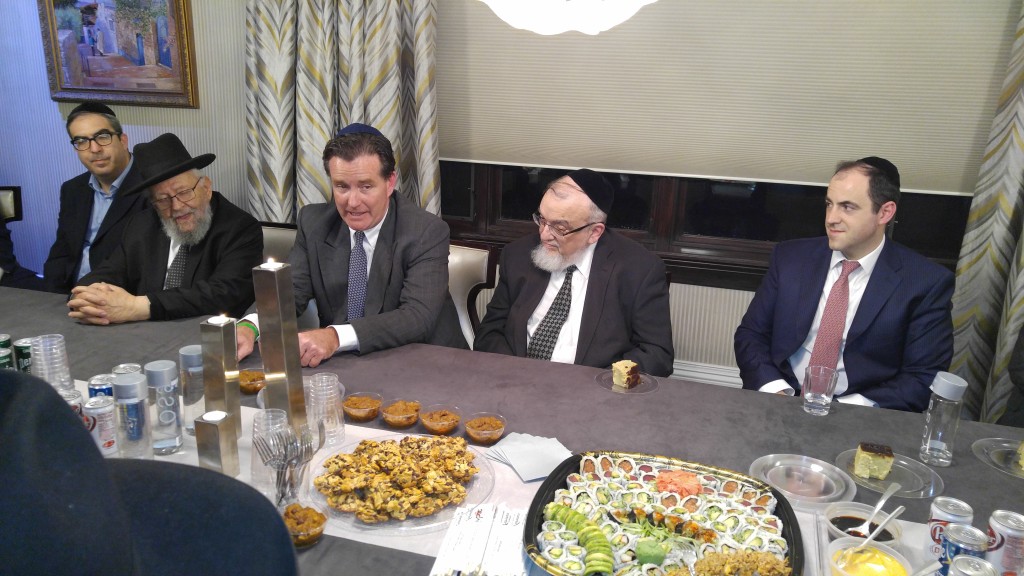 Efforts to impose a state override on an Orthodox-majority school district has anti-Semitic overtones and “we’re not doing it,” the leader of the New York State Senate told an Agudath Israel of America gathering.

John Flanagan, the upper chamber’s majority leader, said at the Lawrence event Thursday night that installing a veto-empowered monitor at the East Ramapo school board was both unconstitutional and unprecedented in the state.

The Long Island Republican spoke days after a panel appointed by the state education department submitted a report recommending the oversight. The 19 proposals — which stunned the school board that represents Monsey, Spring Valley and New Square, since it cooperated fully with the commission — calls on the state legislature to approve funding for the overseer.

Flanagan told the approximately dozen leaders of the local Jewish community in the home of Yoel Edelstein, an Agudath Israel of America trustee, that he had met with Dennis Walcott, who headed the panel, and told him he cannot see how his ideas would pass constitutional muster.

“I had more meetings on East Ramapo than any other legislator,” he noted, recalling his five years as chairman of the Senate’s education committee.

He particularly took issue with the plan to set aside three of the nine school-board seats to be voted on solely by public-school parents. The district — and the school board it voted in — is overwhelmingly comprised of Orthodox Jews, who send their children to private school.

“You all live in your communities because that’s what you love,” Flanagan said. “I call school boards the ‘local board of directors.’ All of them are duly elected by the constituents in that community. … How is [reserving seats] constitutional? I mean, that violates every percept of due process and constitutionality and things like that.”

“Really, what they want to do is overtake that school district,” he said. “And we’re not doing it.”

Flanagan, who ascended to the leadership post about 10 months ago, said he recalled last year’s vote to impose state oversight. The bill, which passed the Assembly by an unusually close vote of 80 to 60, was killed in the Senate.

“The internal conversations that I heard, and more importantly, what transpired on the floor, were very unsettling,” Flanagan recalled. “And I think it should be very unsettling for everyone. I think there were racial overtones, I think there was anti-Semitism, and I find that important. And that was just one of the reasons why we didn’t pass the legislation in the state Senate.”

He added that Walcott’s complaint of misappropriation of funds was insufficient to override a popularly elected school board since there were institutions and processes in place to investigate it, such as the state education department and the Comptroller’s office.

“We don’t need any new legislation on that,” Flanagan said.

Flanagan noted that Sen. David Carlucci, an independent Democrat whose small breakaway faction is part of the Senate’s majority coalition, introduced a new bill to impose the oversight.

“I am supremely confident that it will not pass the New York state Senate,” Flanagan said. “Rabbi [Shmuel] Lefkowitz [Agudath Israel’s Vice President for Community Affairs] and I spoke about this earlier today — in my opinion, it’s basically a fool’s errand and it is undermining the integrity of local management, home rule and local control.”