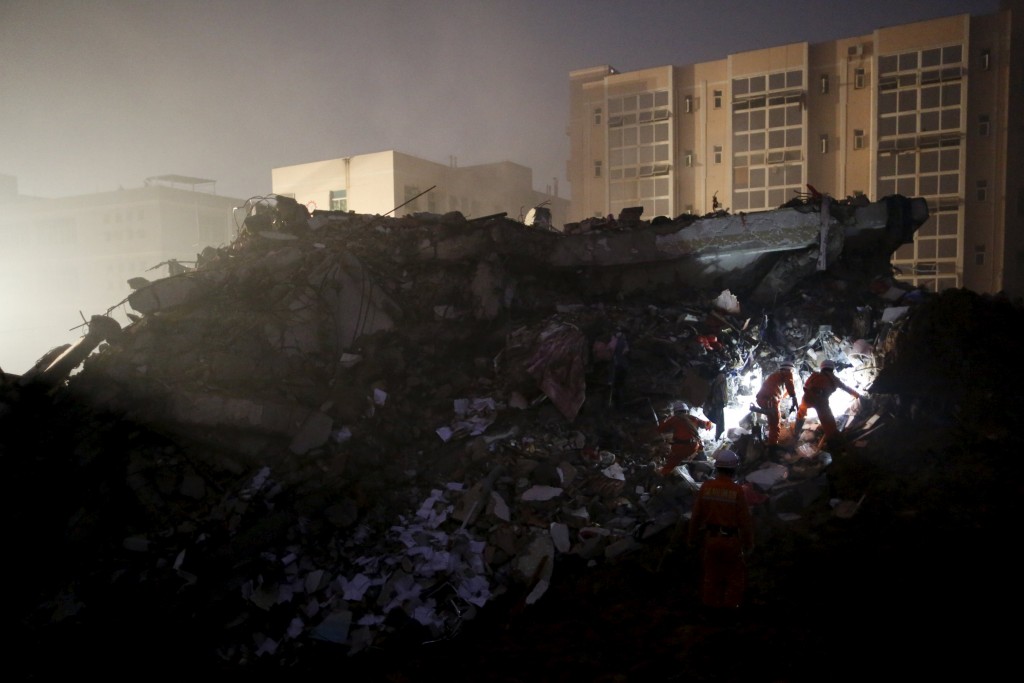 At least 91 people were missing after a huge mound of mud and construction waste collapsed at a business park in southern China and buried 33 buildings in the country’s latest industrial disaster.

Premier Li Keqiang ordered an official investigation into Sunday’s landslide in the southern boomtown of Shenzhen, just across the border from Hong Kong, which comes four months after huge chemical blasts at the northern port of Tianjin killed more than 160 people.

The mudslide smashed into multistory buildings at the Hengtaiyu industrial park in the city’s northwestern Guangming New District, toppling them in collisions that sent rivers of earth skyward.

Villager Peng Jinxin said the mud came like “huge waves,” as residents ran out of the way.

“At one point, the running mud was only ten meters (33 feet) away from me,” Peng told the official Xinhua news agency.

State media broadcast scenes of devastation, with crumpled buildings sticking up from heaps of brown mud that stretched out across the edge of the industrial park. The mud had covered an area of more than 60,000 square meters (72,00 square yards) and was six meters (20 feet) deep in parts, state media said.

Hundreds of rescuers were sifting through rubble looking for survivors after the landslide left everything covered in mud, leaving only a surface of yellow sand visible, Xinhua said.

The Ministry of Land and Resources said the debris originated with a steep, man-made mountain of dirt, cement chunks and other construction waste that had been piled up against a 100-meter (330-foot) -high hill over the past two years.

Heavy rains in the region had saturated the soil, making it increasingly unstable and ultimately causing it to collapse with massive force.

“The pile was too big, the pile was too steep, leading to instability and collapse,” the ministry said, adding that the original, natural hill remained intact.

A nearby section of China’s major West-East natural gas pipeline also exploded, state media added, though it was not clear if this had any impact on the landslide.

Xinhua said the pipeline was owned by PetroChina, China’s top oil and gas producer, that the 400-meter (1,312-foot) -long ruptured pipe “has been emptied,” and a temporary pipe will be built.

PetroChina wrote on its microblog that the pipeline blast had hit at least one industrial user, a Hong Kong power plant operated by Castle Peak Power Co. Ltd., a company majority-owned by a subsidiary of CLP Holdings, that has now switched to coal for power generation.

Premier Li ordered central government officials to help Shenzhen authorities in the rescue, Xinhua said. It said that more than 2,000 rescuers were at the scene with sniffer dogs and drones.

Fourteen factories, 13 low-rise buildings and three dormitories were among the buildings flattened.

The frequency of industrial accidents in China has raised questions about safety standards following three decades of breakneck economic growth.

In one of China’s worst landslides in living memory, more than 1,500 people died in 2010 when a barrage of mud slid down a mountainside into a town in the northwestern province of Gansu following torrential rain.