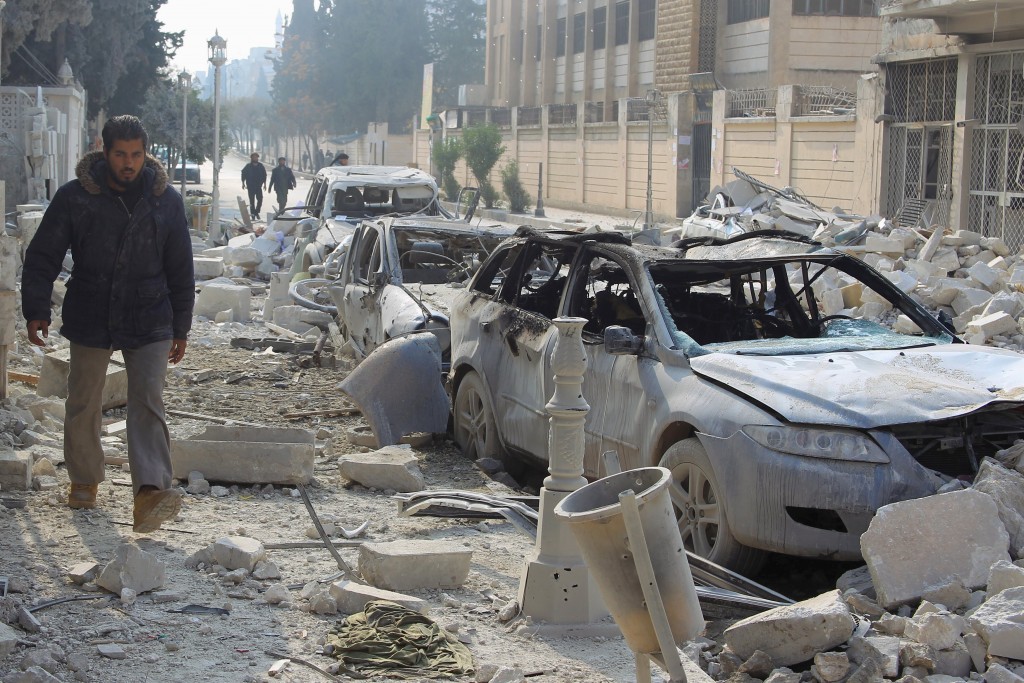 Air strikes believed to have been carried out by Russian warplanes killed scores of people in the center of the rebel-held city of Idlib in northwest Syria on Sunday, rescue workers and residents said.

They said at least six strikes had hit a busy marketplace in the heart of the city, several government buildings, and residential areas. Rescue workers said they had confirmed 43 people dead but that at least 30 more bodies had been retrieved and still needed to be identified.

Footage on social media and the pro-opposition Orient media station showed makeshift ambulances rushing with injured civilians through an area where people were searching for survivors among the debris of collapsed buildings.

One local resident, Sameh al-Muazin, said he had seen mangled bodies on Jalaa, the main street of the city, adding that people feared a further round of intensive bombing.”Everyone is afraid that this is just the beginning,” he said.

Russia began a major aerial campaign on Sept. 30 in support of Syrian President Bashar al-Assad, its ally, who had suffered a series of setbacks including the loss of Idlib province and areas near the coast which are of crucial strategic importance. A coalition of Islamist rebels took Idlib city, the capital of a northwestern province of the same name, earlier this year. It had previously been largely spared by the Russian warplanes.

Moscow says it targets Islamic State terrorists, but rebels and residents say they are causing hundreds of civilian casualties through indiscriminate bombing of areas far away from the frontlines.

Residents say they can distinguish between Russian planes that fly at high altitudes during sorties (combat missions) and Syrian helicopters that generally drop indiscriminate barrel bombs at much lower heights.

Idlib was part of a United Nations-brokered ceasefire deal reached in September by the warring parties. This deal allowed for the eventual withdrawal of rebel fighters holed up in a border village near Lebanon in exchange for the evacuation of civilians from two Shi’ite villages under rebel siege in Idlib province. Under the deal there was a tacit understanding that Idlib city was included in the ceasefire arrangements.

Idlib has attracted thousands of ordinary Syrians displaced by the fighting in areas in northern Syria and has also become the center for a local administration run by Islamist terrorists.