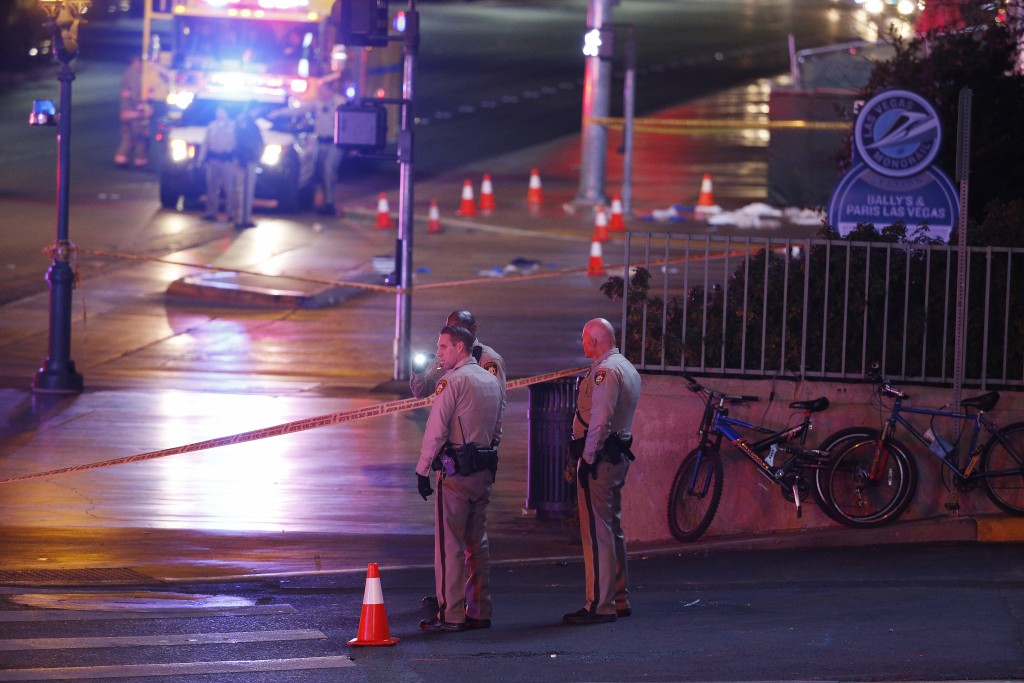 A driver with a 3-year-old in her car repeatedly smashed into crowds of visitors on the Las Vegas Strip on Sunday evening, killing a woman from Arizona and injuring dozens of others, authorities said.

Video of the car plowing into pedestrians on a busy stretch of Las Vegas Boulevard in front of the Paris and Planet Hollywood casino-hotels “looks like it’s very intentional,” police Capt. Brett Zimmerman said Monday. The 1996 Oldsmobile sedan was fully on the sidewalk twice Sunday evening, including once when it traveled for 200 feet.

Police say they don’t know why the woman in her 20s, who has not been identified, drove onto the walkway first near a restaurant at Planet Hollywood and then again at the driveway entrance to the Paris hotel. The child in the car with her was not hurt.

The driver sped away before the vehicle was found at a hotel and she was taken into custody, police said.

The woman was having her blood drawn and was being held in jail with charges pending. She had recently moved to the area; the car she was driving was registered in Oregon, authorities said.

“This is a huge tragedy that has happened on our Strip,” police Lt. Peter Boffelli said.

Jessica Valenzuela, 32, of Buckeye, Arizona, died in the crash, according to Clark County Coroner John Fudenberg. The suburban Phoenix woman was visiting Las Vegas with her husband, the coroner said.

Of the victims, some were from Montreal and needed a French translator, while four were Oregon college students in town to compete in a wrestling tournament.

Justin Cochrane, a visitor from Santa Barbara, California, said he was having dinner at a sidewalk restaurant outside the Paris hotel when he saw the car smashing into pedestrians.

“It was just massacring people,” he said, adding that the car appeared to be going 30 to 40 mph.

The Oldsmobile then went farther down the road and drove back into another crowd of pedestrians on the sidewalk, he said.

“Why would it slow to go around and then accelerate again?” he said. “I thought, ‘It’s a crazy person.’ ”