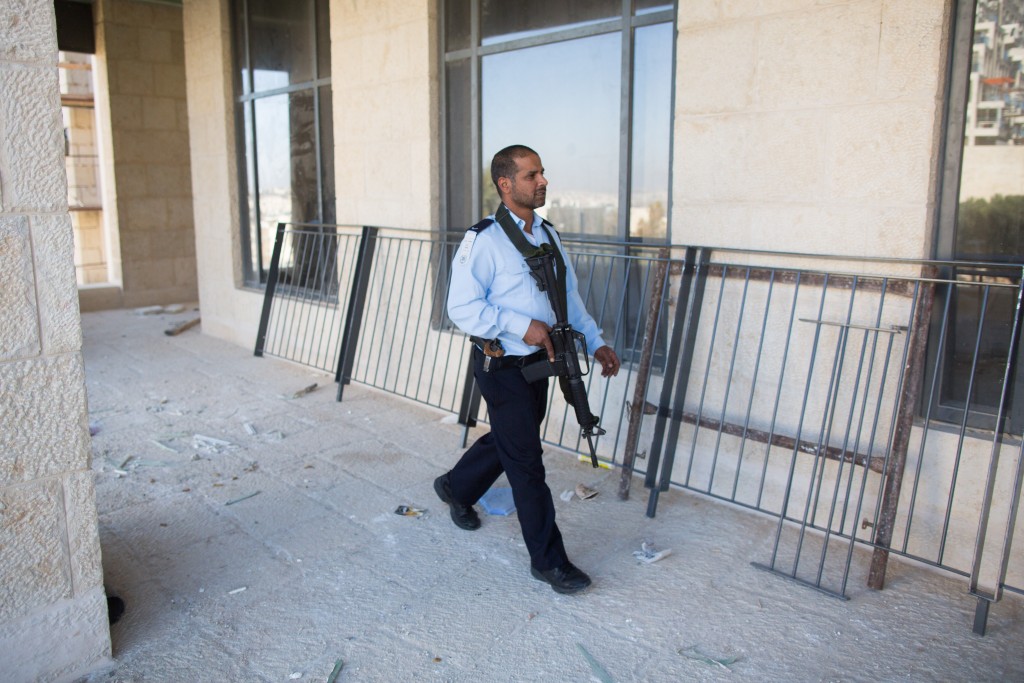 Three Israelis were injured, one seriously, in a stabbing attack in the central Israeli city of Ra’anana on Shabbos afternoon. The victims were stabbed by an Arab terrorist at two sites in the city, after he tried to get into a local shul, but was chased off by mispallelim.

The terrorist, a 20-year-old resident of Jenin, began his stabbing spree on Anilevich Street, in a quiet residential area of the city. He stabbed a couple walking down the street and ran away to the entrance of a shul about 200 meters away, attempting to get in. A passerby who realized what was happening fired into the air, while people inside the shul blocked the entrances.

The terrorist then entered an open window into an apartment building next to the shul, where he stabbed a resident, as she fought him off with her bare hands, screaming at the top of her lungs. Deciding to back off, the terrorist then tried to escape into another apartment, but a dog began barking loudly, alerting police, who were by now on the scene, to the terrorist’s whereabouts. Police were able to subdue and arrest him. Under questioning, the terrorist said that he had decided to carry out the attack to avenge a relative’s death at the hands of Israeli security forces.

Two of the victims were lightly wounded and treated at the site of the stabbings, while one, who was moderately to seriously wounded, was taken to a hospital in Kfar Saba for treatment. Police initially believed a second terrorist had been involved, and began looking for him, but later called off the search.

A stabbing attack in Ra’anana in October left two Israelis wounded. In that incident, an Arab terrorist pulled a knife out on Achuza Street in Ra’anana, the city’s main commercial strip. One person was badly wounded in the attack, and two were lightly injured. The terrorist was shot by a passing armed Israeli. Another Israeli was injured in a second stabbing attack about a half hour later, further down the same street. That terrorist, too, was eliminated.

On Friday evening, several minutes before the start of Shabbos, a terrorist tried to run down soldiers during riots in the Arab village of Silwad, near Ofra in the Binyamin region. The terrorist was shot and killed before he could carry out the attack.

In Yerushalayim, two IDF soldiers were injured on Friday as Arabs rioted in the Anata neighborhood. The soldiers were given first aid on the spot, and soldiers used anti-riot methods to break up the disturbances.