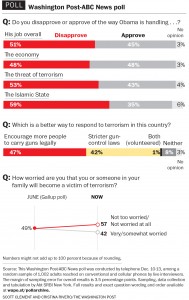 Over three-quarters of Americans doubt the nation’s ability to stop “lone wolf” terrorist attacks by individuals acting on their own, according to a new Washington Post-ABC News poll.

Despite widespread doubts about security, the poll finds fears of a family member being a victim of terrorism have not risen since the shooting in San Bernardino, California that killed 14 and terror attacks in Paris last month that left 130 people dead.

President Obama, who addressed the nation in a rare Oval Office speech following the shootings, continues to receive negative marks for handling terrorism and dealing with Islamic State terrorists. Despite his call for greater gun restrictions aimed at keeping high-powered guns out of terrorist hands, the Post-ABC poll finds record high opposition to a ban on assault weapons.

The San Bernadino shooting joins a series of attacks in recent years by individuals without clear coordination with radical groups such as al-Qaida. The couple who opened fire at an office party pledged allegiance to the Islamic State, according to federal investigators, but the group has not linked itself as clearly to the shooting as it has to the Paris attacks. The FBI has expanded its investigation to a growing network of people with close ties to the shooters, Syed Farook and Tashfeen Malik, based on cooperation with a neighbor who legally purchased two rifles used in the attack.

Americans express far less confidence in the country’s ability to thwart attacks by individuals than foreign terrorist groups. While 43% have at least a “good amount” of confidence in the U.S. government’s ability to stop a large scale organized attack by a foreign group, only 22% say the same about stopping “lone wolf” attacks in which individuals decide to act on their own. Seventy-seven percent express a “fair amount” or no confidence that the government can stop such individuals, including one-third who lack any confidence at all.

After the Paris attacks in November, a Post-ABC poll found more Americans saying a terrorist attack in the United States with a large number of casualties was likely in the near future. While those concerns may have been validated by the San Bernadino shooting, the new poll finds personal worries are on par with recent years and down slightly from this summer.

Forty-two percent of adults say they are very or somewhat worried about themselves or a family member becoming a victim of terrorism, down from 49% in a June Gallup poll asking the same question, which was the highest level of worry in the firm’s surveys since 2001. The current level of concern fits in the middle of the range seen over the past decade.

Obama’s overall approval rating stands at 45%, similar to 46% last month but down from 51% in October, and ending the year four points above where he stood in December of last year. Just as many Americans approve as disapprove of Obama’s handling of the economy, 48%, but disapproval rises to 53% for his handling of the terrorism threat and 59% for the Islamic State.

The San Bernadino shooting reignited the debate over whether the nation’s gun laws are too loose or if greater civilian firearm ownership could prevent violence. When asked which is the better reaction to terrorism, 47% say encouraging more people to carry guns legally while 42% prefer enacting stricter gun-control laws.

As with gun restrictions generally, support for encouraging more people to carry guns is higher among Republicans, men, those without college degrees and those who live in rural parts of the country. A majority of respondents who report being “very worried” about a family member being a terrorism victim also support encouraging more people to carry guns, compared with half of those who are less worried.

On a specific policy, 53% of Americans now oppose a national ban on assault weapons, with opposition rising 11 percentage points from 2013 to its highest level in Post-ABC polling since 1994.

The Post-ABC poll was conducted Dec. 10-13 among a random national sample of 1,002 adults reached on conventional and cellular telephones. Overall results have a margin of sampling error of plus or minus 3.5 percentage points.