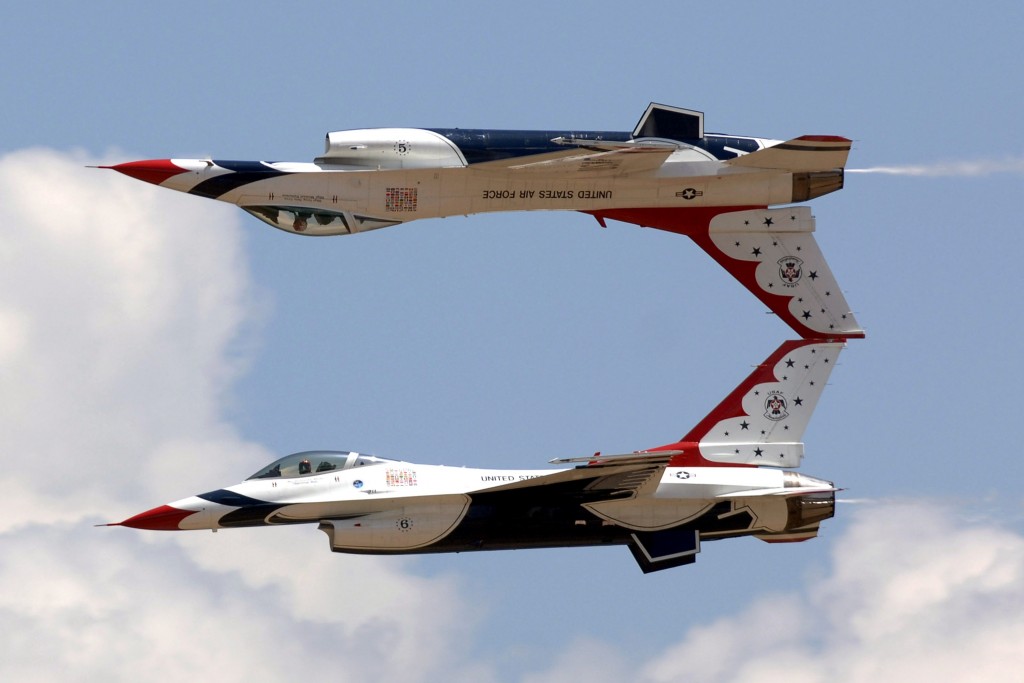 The U.S. Air Force’s nine major aviation programs — from the costly F-35 to a new long-range strike bomber — will present the next president with a budget dilemma that will only worsen as spending accelerates, according to a new analysis.

“The net effect of starting these new programs atop a full procurement budget is a classic ‘bow wave’ of procurement, with increasing numbers of programs with growing budgets all trying to fit within a fixed budget top line at the same time while building requirements for increased future funding,” the Congressional Research Service found.

Among options for the Air Force and the next president after Barack Obama leaves office in January 2017 may be reducing the number of F-35s purchased from the fighter’s contractor, Lockheed Martin Corp., according to the report. The plane is the costliest U.S. weapons system ever.

The heaviest costs won’t start until after the Air Force’s current five-year plan, which already calls for spending almost $73 billion on the nine programs through fiscal 2020, with about $53 billion of that for procurement and the rest for research and development.

Faced with “the need to replace several types of aircraft simultaneously,” the Air Force’s research and development programs will peak after legislative budget caps expire in fiscal 2021, the congressional research office found, whether as “a deliberate strategy on the part of the Air Force or a coincidence of timing.”

In addition to the F-35 and the new bomber, the other programs are the KC-46 refueling tanker, a replacement for the JSTARS intelligence aircraft, a new combat rescue helicopter, a new Air Force One, advanced T-X trainer aircraft to replace the 1960s-era T-38, small numbers of new drones and additional C-130 transports.

And that’s not all. The Congressional Research Service report doesn’t include what Pentagon officials say is at least $10 billion to $18 billion more annually by the mid-2020s to upgrade the nation’s nuclear triad of submarines, land-based missiles and bombers and air-dropped weapons.

The biggest expenditures include a new missile-firing replacement for the Ohio-class submarine, a new intercontinental ballistic missile, a cruise missile, an upgraded B61 nuclear gravity bomb and command-and-control systems.

“All three legs of the nuclear triad are due for modernization nearly simultaneously,” Todd Harrison, a defense budget analyst with the Center for Strategic and International Studies, said in an e-mail. The Pentagon estimates also may not include the cost of manning and maintaining the systems, he said.

“The big unknown is how it will be paid for, especially since many conventional weapons are planning replacement programs at the same time,” Harrison said. “Barring a significant increase in the defense budget in the 2020s, something is going to have to give.”

Pentagon Comptroller Michael McCord told reporters last month that the funding challenges posed by the nuclear arsenal upgrade extend to 2035. “There’s not a good answer to that yet,” McCord said. “We have spent a lot of time thinking about this,” and “it’s a significant issue” that “I don’t know of a good way for us to solve.”

In addition to weapons spending, Defense Secretary Ash Carter has unveiled a “Force of the Future” concept to attract and retain talented troops and civilians that would come with compensation and benefits costs that remain to be determined.

Besides cutting back F-35 purchases, the Congressional Research Service said the Air Force’s options include pressing for a budget increase, slowing spending on development or pressing Congress to bankroll its new bomber in a separate fund that uses money from the Army, Navy and other Pentagon accounts.

“These challenges are not invisible, but few policymakers want to look or understand” them, said MacKenzie Eaglen, defense analyst for the American Enterprise Institute, which supports increased defense spending. “The current defense program is underfunded.”

“Odds are the next administration — Republican or Democrat”— will have to substantially increase defense spending or the industry and Congress will face a repeat of the massive program terminations and reductions that Defense Secretary Robert Gates executed in April 2009, Eaglen said in an e-mail.