Business Restaurants Have Changed How Tips Work, And Waiters Are Furious
Business 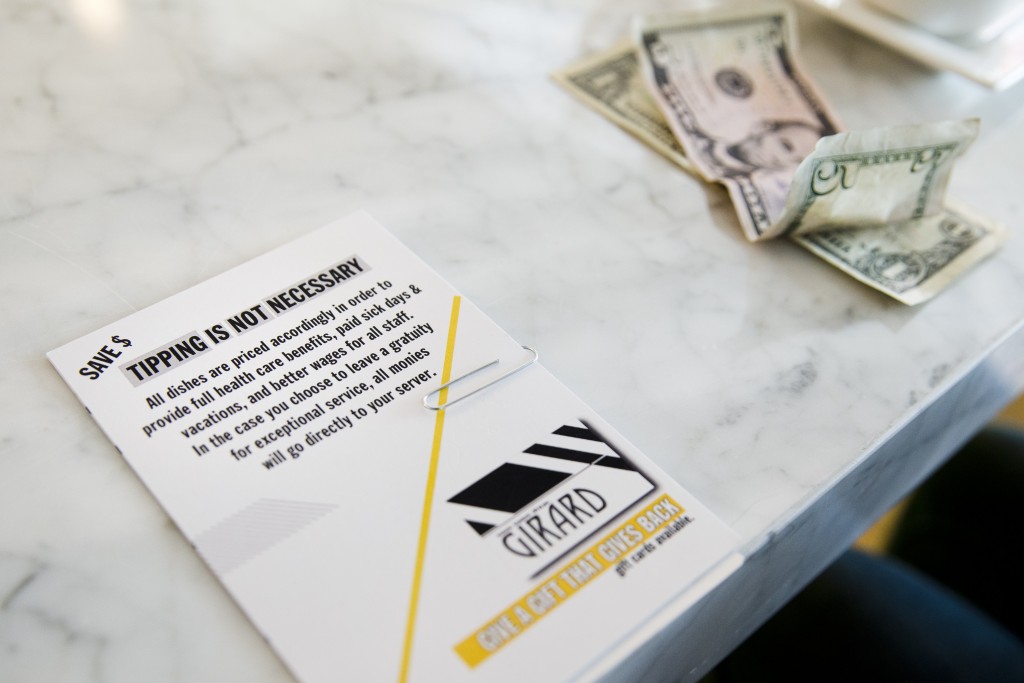 Heather Freeman has been a waitress at TGI Fridays in Pittsburgh for almost a decade now, and used to love working in December. Big parties would come in, she says, and usually be generous with their tips. Even when the economy worsened and diners grew less magnanimous, there was the auto-gratuity, which allowed her to simply add an 18 percent tip to the table’s bill.

But that safety net disappeared in the beginning of last year, when TGI Fridays – and most other large restaurant chains – got rid of auto-gratuities entirely. The reason: A new rule from the Internal Revenue Service that counted those mandatory charges as wages, making them subject to payroll taxes and a factor in overtime calculations. Employers no longer wanted to put up with the extra hassle and expense of dealing with the new accounting rules, but Freeman thinks servers suffered.

“When they got rid of the auto-gratuity, and we had parties of eight or more coming in, and they had a $300 bill, they’re not leaving even 10 percent,” Freeman says. When large groups tip miserly amounts, the server can actually lose money on the table, since she has to share tips with the rest of the wait staff at the end of the night.

It’s taken a while, but Freeman and other workers have now taken up the cause of winning the auto-grat back. A couple months ago, she started a petition which has now nearly reached its goal of 2,000 signatures. In doing so, she joined workers at Darden Restaurants – which includes large national chains – who started a similar campaign earlier this year that’s up to more than 7,000 signatures. In the past couple weeks, another petition popped up at BJ’s Brewhouse that already has topped 2,000.

In response to a request for comment on the campaign, a TGI Fridays spokesperson said “we try to offer our people competitive pay, and we’ll continue to evaluate our compensation model moving forward.” Darden Restaurants says it’s done its own surveys of workers, and found that they would rather take their chances on earning a large tip from a group rather than have a service charge be automatically added to their wages. The company also says it hasn’t seen a decline in tip percentages for large parties.

If it is true that the size of the tips has not changed, that would fly in the face of the long-established “magnitude effect” found in tipping theory, which describes how tip percentages tend to decline as the size of the bill increases. Michael Lynn, a professor at Cornell University’s School of Hotel Administration, has recommended the use of auto-gratuities to preserve restaurant servers’ incentive to take large groups, rather than turn a large number of small tables, which would otherwise earn them the most tips. And indeed, some smaller restaurants have kept the auto-gratuity, since the IRS’ new rules haven’t always been rigorously enforced.

Of course, the auto-gratuity is just one piece of a larger debate, with the whole practice of tipping is being called into question as cities pursue higher minimum wages – and, importantly, start looking at getting rid of the tipped minimum wage, which still sits at $2.13 nationally. Some large restaurant groups have announced their intention to phase out tips and set higher menu prices to meet the new minimums, both for servers and kitchen staff, effectively adding something that looks like the old auto-gratuity, but calling it something different.

“The larger problem is, does tipping still have relevance? Should base pay just go up? Is that the job of the employer, which it is in every other industry?” asks Carolyn Richmond, who practices employment and hospitality law at Fox Rothschild. “You’re seeing businesses look for every possible way to pass on costs without raising the price of that burger. So we’re at a turning point right now for the restaurant industry, and that’s why you’re seeing these arguments over so many things.”

The Restaurant Opportunity Center, a worker advocacy group that has helped with the petition campaigns, would rather see restaurants boost base wages and get rid of tips entirely. Until that happens, Heather Freeman would like to see auto-gratuities come back, especially with the tipped minimum wage in Pennsylvania still languishing at $2.83. The issue hasn’t cropped up as much in California, for example, where the tipped wage is the same as the minimum for everyone else.

“If people were making $10 an hour, you wouldn’t be as concerned,” Freeman says.