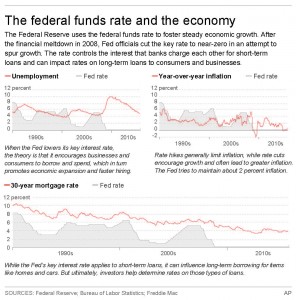 Stocks climbed Wednesday after the Federal Reserve raised interest rates, a long-expected vote of confidence in the U.S. economy. At the same time, investors were encouraged that the Fed emphasized that further increases will be gradual.

The market was slightly higher at midday and rose steadily through the afternoon after the Fed released its policy statement and as Fed Chair Janet Yellen gave a news conference explaining the Fed’s decision.

The market finished higher for the third day in a row, something that hadn’t happened in almost two months. The S&P 500 is up 3 percent over the last three days.

The biggest gainers were sectors known for paying big dividends. Utilities surged 2.6 percent, while telecommunications and consumer goods makers rose 2 percent. Only the energy sector finished lower as the price of oil dropped and natural gas continued to fall.

Paul Christopher, head global market strategist at Wells Fargo Investment Institute, said investors think big dividend payers might pay even more out to shareholders and buy back more stock because as interest rates rise, they’ll be reluctant to spend a lot of money on equipment.

The Federal Reserve raised its main interest rate by a quarter of a point, a move that was widely anticipated in the markets. That rate had been near zero for seven years. “The Fed’s decision today reflects our confidence in the U.S. economy,” Chair Janet Yellen said at a news conference.

For months the Fed has been suggesting it would raise borrowing costs from their historically low levels because the U.S. economy has improved a great deal since the financial crisis and the Great Recession. The S&P 500 has more than doubled since the Federal funds rate was cut to zero
in 2008. Unemployment, which peaked at 10 percent, is now at five percent.

The Fed emphasized Wednesday that it plans to raise interest rates slowly.

The boost in interest rates lifted metals prices. The yield on the two-year Treasury note also rose to its highest level in five years.

Rates on mortgages and car loans aren’t expected to rise much soon. The Fed’s benchmark rate doesn’t directly affect them. Long-term mortgages, for example, tend to track 10-year U.S. Treasury yields, which will likely stay low as long as inflation does and investors keep buying Treasurys.

But rates on some other loans, like credit cards and home equity credit lines, will likely rise, though probably only slightly as long as the Fed’s rate hikes remain modest.

Oil prices and energy stocks skidded after the U.S. government said oil stockpiles grew 4.8 million barrels last week. The price of oil has plunged to its lowest levels in more than six years because supplies continued to rise as the global economy struggles.

Natural gas, which has dropped to 16-year-lows, lost 3.2 cents to close at $1.79 per 1,000 cubic feet. Natural gas has been falling as traders anticipate weaker demand for home heating due to the unseasonably warm winter weather in the U.S.

Payment card processor Heartland Payments climbed after it accepted an offer from Global Payments worth $100 per share, or $4.3 billion. Heartland provides credit, debit, and prepaid card processing and security technology services nationwide. Its shares rose $9.87, or 11.6 percent, to $94.97.

The government said the pace of homebuilding increased in November on a big jump in apartment construction in the Midwest and the South. Construction of single-family houses also reached an eight-year high. The Commerce Department said Wednesday that total housing starts climbed 10.5 percent.