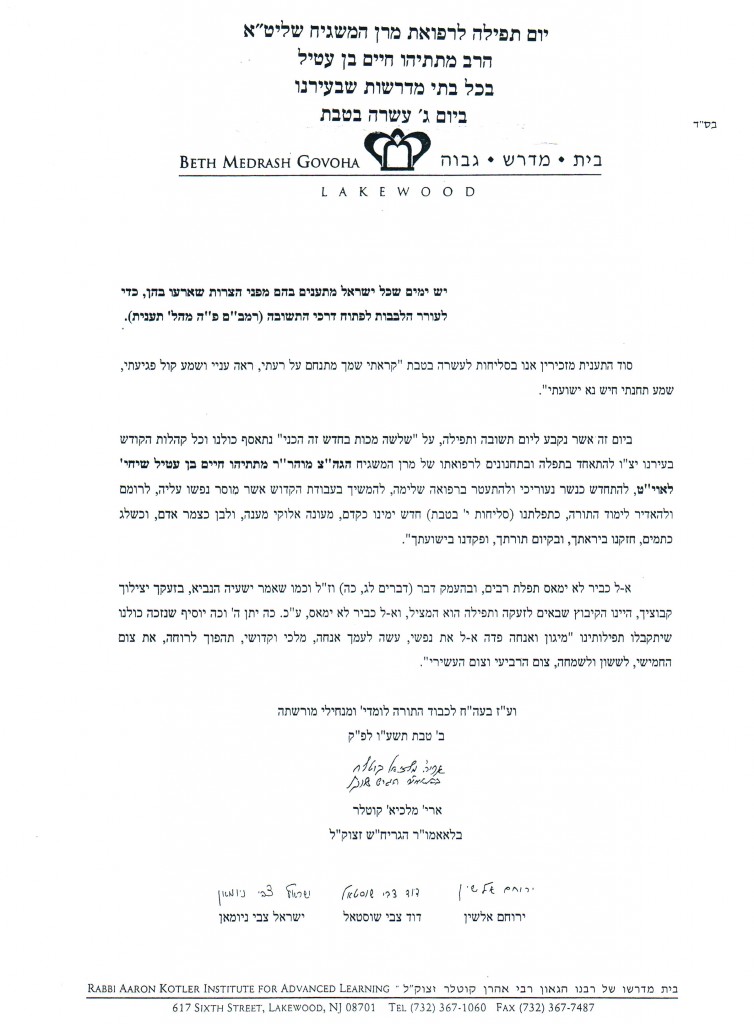 The Roshei Yeshivah of Bais Medrash Govoha (BMG) of Lakewood have issued a letter declaring the coming fast day of Asarah B’Teves as a yom tefillah for the recovery of the Mashgiach, Harav Mattisyahu Salomon, shlita.

“In times of tzaar the Mashgiach always awakened us and urged us to daven, as the only way for Klal Yisrael to deal with crises that faced us. Now it is time for us to give back to him,” said a close associate of Rav Salomon. “His condition has not improved for some time and the Roshei Yeshivah wanted to take advantage this eis ratzon to urge the public to be mispallel so that he can return to health and continue in his avodas hakodesh.”

The Mashgiach has been suffering from a condition that has left him increasingly weak over the last few years. Over the summer, he took a turn for the worse. He was briefly hospitalized and has since returned to Lakewood, but has been able to make very few public appearances since then.

In BMG, divrei hisorrerus will be followed by the recital of Tehillim. The letter urges all shuls and yeshivos throughout Lakewood to designate a time for extra tefillos as well. Organizers hope batei medrashim throughout the New York area will join in the yom tefillah as well.

The tzibbur is urged to continue to daven for the refuah sheleimah of Harav Mattisyahu Chaim ben Ettel.