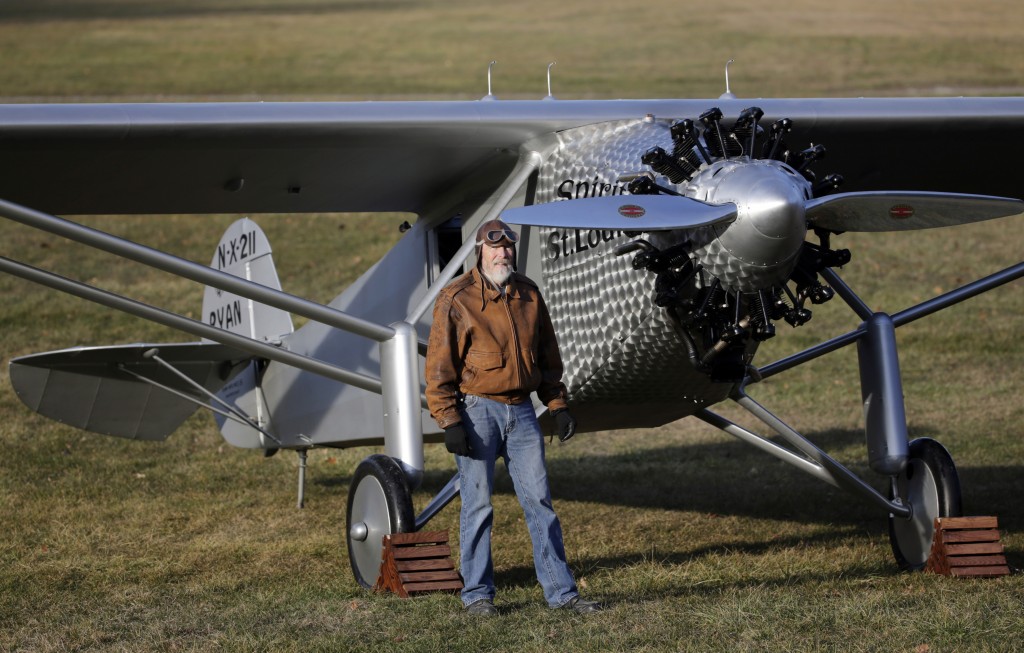 Charles Lindbergh would instantly recognize the plane with “Spirit of St. Louis” painted on its nose rumbling above treetops in New York’s Hudson Valley. There’s a 9-cylinder engine similar to the one used in his historic flight, an identical cockpit under a 46-foot wing and a look-alike of his wicker pilot’s seat.

The just-completed doppelganger is the very spirit of the Spirit of St. Louis. But unlike the plane Lindbergh flew solo across the Atlantic in 1927, there will be no flights to Paris for this Spirit. It will join other vintage planes and reproductions that buzz and dive for weekend crowds at the Old Rhinebeck Aerodrome, fulfilling decades of planning and toil at the not-for-profit attraction.

“It’s a great feeling of accomplishment and a lot of pride. A lot of blood, sweat and tears went into it,” Ken Cassens said as he prepared to fly the plane this week.

Cassens has spent about 10 years making the plane, working on and off since 1996. It has required leg work, some scavenging and countless hours of tinkering in a hangar 80 miles north of New York City. But it’s a job the 71-year-old had been primed for since he was a boy reading Lindbergh’s memoirs and building Spirit of St. Louis models. The retired flight engineer now fixes and flies planes for the aerodrome.

Cassens inherited the job after the 1993 death of aerodrome founder Cole Palen, whose own Spirit replica plans never got fully off the ground. With money tight, he volunteered his time in the last year. Cassens said the project honors his old friend, and he carried Palen’s beret and pilot wings in the cockpit on the replica’s maiden flight.

There has been a small squadron of Spirit reproductions made over the decades, and the original remains prominently displayed at the Smithsonian National Air and Space Museum in Washington. The museum’s chief curator, Peter Jakab, said the enduring interest in Lindbergh and his airplane speaks to the “singular moment” of the epic 1927 flight.

“It came at a time when there was great focus on the sort of the beginnings of aviation really becoming an industry and becoming something more pervasive in daily life and in business,” Jakab said. “And he had this great story of this relatively unknown pilot doing this thing with minimal resources, on his own.”

Making a precise Spirit replica is tricky, because the original was a one-of-a-kind built on a shop floor. To fill in missing details, Cassens studied old photos and peeked into the original while perched on a cherry picker at the Smithsonian. Antique parts like the tachometer were donated and the aerodrome bartered with a museum for the propeller.

Cassens took pains to make sure the control panel would be the same as the one Lindbergh looked at for 33 1/2 hours on his trans-Atlantic flight. There’s even a small round compact mirror, like the one a woman supposedly provided to Lindbergh just before take-off to help him read a compass over his head.

Still, this Spirit is not exactly like the original. The fabric skin stretched on the replica’s wings and back fuselage is Dacron, not cotton, because it’s more durable and less flammable. And while Lindbergh packed his plane with five gas tanks for his trip, this replica has a single, 55-gallon tank.

The new Spirit will fly for crowds beginning May 20, the date Lindbergh started his historic flight. Cassens has taken the plane up a few times to get a feel for it before winter sets in. In the air, he is mostly concerned with technical details, but he’s still cognizant of the link to his old hero.

“While you’re in the flight you don’t really think ‘Oh hey, Lindbergh flew one of these and this is the Spirit of St. Louis.’ That doesn’t go through your mind right away,” he said. “But after the flight, when you have time to reflect on all of it, it comes out.”